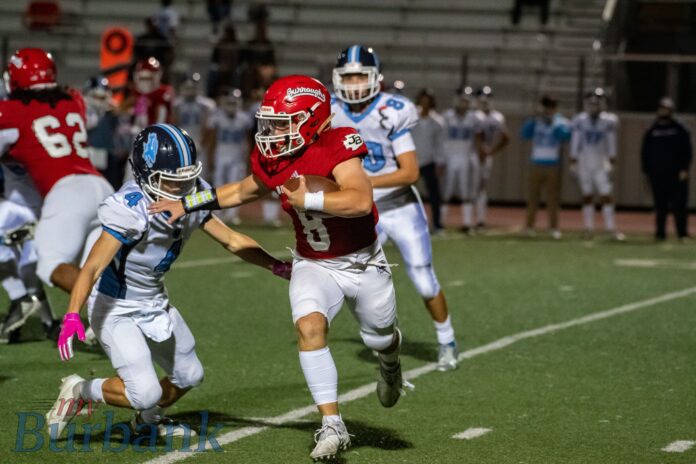 Consistency is what the Burroughs High football team needed. After a slow start, the Bears turned things around and had several chances to pull even with visiting Crescenta Valley.

But not being able to convert two key opportunities, one in each half, the end result was a 14-7 in a Pacific League loss at Memorial Field Friday night.

“We didn’t come out in the first half like we thought we would. They took advantage of that,” Burroughs coach Jesse Craven said. “In the second half the guys did what we asked them to do which was to fight back and give ourselves some opportunities, which we did. We didn’t make the plays we needed to make in the end. We had two opportunities in the red zone. If you have turnovers in the red zone, it is tough to fight back from that.”

Burroughs (3-3 overall, 1-1 in league) was stopped on fourth down at the 2-yard-line in the first half.

The Bears were deep in Falcon territory to begin the fourth quarter, but a pass attempt by Jon English was intercepted by Luke Steele to end hopes of tying the score.

Crescenta Valley (2-4, 1-1) got on the board first as quarterback Jaston Walker scored on a 15-yard run with 5:15 left in the first quarter.

The Falcons doubled their lead to 14-0 at the 10:30 mark of the second quarter when Shade Shaefer scored on a 10-yard run.

The defenses on both sides both didn’t allow for any long plays.

Burroughs scored its lone touchdown with 9:58 left in the third quarter as Nate Howland-Chinna scored on a 14-yard-run as the Bears took advantage of great field position after Crescenta Valley fumbled on the second-half kickoff. Howland-Chinna finished with 64 yards rushing in 16 carries.

Burroughs will host Pasadena High next Friday. The Bears will need to win at least two of their final three games to have a shot at an automatic CIF playoff berth. Muir High and rival Burbank are the remaining opponents left to play.