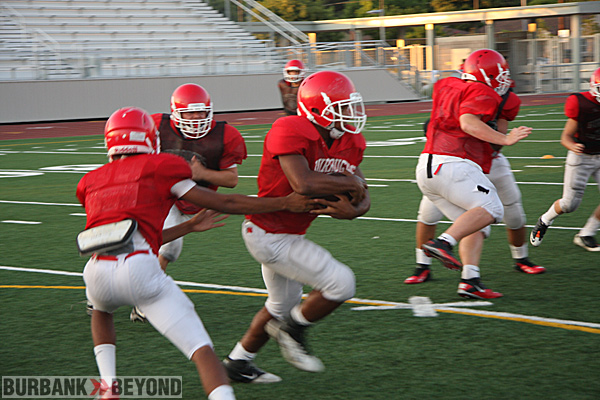 The “Big Red Machine” was a moniker that represented the powerful Cincinnati Reds of the 1970’s. The same can be said of the present day John Burroughs football program. The Indians have won three consecutive Pacific League titles and four of the last six years. Kick-off is just around the corner and JBHS is setting its sights on another successful season.

Not since the days of star running back Edgar Penaranda and coaching legend Bob Dunivant has Burroughs experienced a streak like this when the Indians won five consecutive titles from 1977 through 1981. Since leaving the ultra-competitive Foothill League in 2005, Burroughs has compiled a staggering record of 34-8 in the Pacific League. Is a four-peat a possibility in 2012?

“Being a league champion is great but it starts getting a target on your chest and people try to find a way to knock you off,” said Keith Knoop, who begins his 16th season as Burroughs head coach. “We are young and inexperienced but very talented and very athletic. The league is a toss-up but if we can play athletically like I know we can and be well-disciplined we should be in the mix.”

One of the proud traditions at Burroughs has been the achievements of its running backs. From Penaranda to Mike Perez, Thomas Kyle, Joe Wiggan, Dominique Barnes, Dalton Williams and last year’s school-record breaker Zander Anding, the Indians have been high school’s version of “Tailback U” at USC. Year in and year out the Indians churn out a powerful running attack.

“Running has been a tradition here,” Knoop said. “Since 2005 our running backs have had almost 15,000 yards rushing. It’s been fun and our mentality is to run the ball when you have those great running backs.”

This year’s team will rely on a quartet of talented backs who could each make an impact in any game. Senior Israel Montes, a two-year starter at defensive back, will transition into the lead role for the Indians ground game. Montes is a quick “scat-back” whose elusiveness will bring headaches to opposing defenses.

Seniors Garrett Manoukian and Josh Storer both bring an aggressive attacking style of running too which will be complimented by the powerful and strong rushing of senior fullback Jason Hamm.

“I don’t know if one back will end up with all the yards like before but as a committee they might be able to do a lot of damage,” Knoop stated.

While the running backs frequently rush their way into the Burroughs record books, the unsung heroes are the men in the trenches who set the tone of every game with their physical style of play. Senior guard Ermar Cruz, senior center Joseph Wallace and sophomore tackle Andrew Mills anchor the offensive line that will pave the way for the Indians as well as protect the young JBHS quarterbacks.

As the Indians concluded their first week of fall practice, an intense competition at quarterback had yet been settled to see who will start the regular season opener on August 31. Juniors Andrew Williams and Angel Manzanero have battled back and forth with each of them getting equal reps to showcase their skills.

“They don’t have varsity experience but they each bring something good to the table,” Knoop said. “But realistically results are going to be what determines who the guy is that gets it done.”

Maybe the most talented and gifted player on the offensive side of the ball is junior wide receiver Oharjee Brown. Knoop describes him as a “great leader” and another “coach on the field”.

One area that cannot be overlooked is the special teams and Burroughs returns kicker Jairo Gomez and punter Daniel Marbach. They started a year ago and both provide invaluable amount of skill and experience that could make the difference in a highly competitive contest.

The Indians’ defense will be led by Cruz, an all-league selection from 2011, Hamm at nose guard, senior defensive end Jorge Villa and senior linebackers Zach Hartman and Michael Kim.

“He will run into a wall and hurt the wall,” Knoop said of Hartman.

Montes and junior Sean Johnson are the strength of the secondary.

After 62 years of playing on a natural grass field, Burroughs will play their first two games of the season on synthetic field turf at renovated Memorial Field against Paraclete followed by North Hollywood. The defense of their league title will begin for the Indians against Arcadia on September 21. The “Big Game” is slated for November 2 versus archrival Burbank.

“It’s going to be neat to get on that field turf and play a real game and see the facility being used,” Knoop said. “I hope the community comes out and wants to really enjoy the stadium. We can’t wait to play in it.”