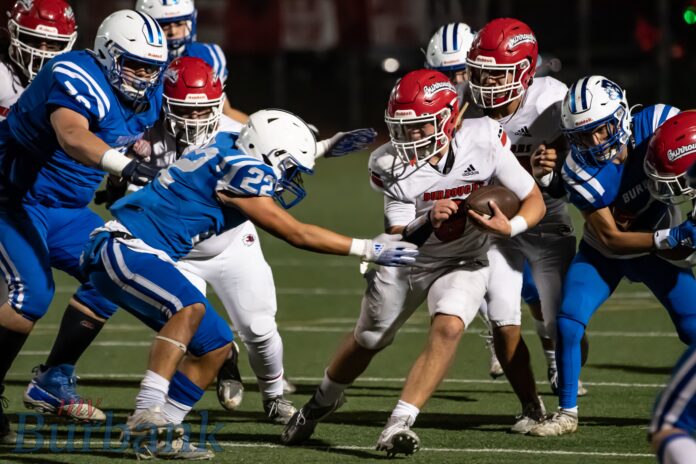 With a father and an older brother who have played in the Burroughs versus Burbank rivalry football, Burroughs High quarterback Jon English knew exactly what was at stake Friday night when the two teams clashed at Memorial Field, not to mention a playoff berth.

English carried his team on his back as Burroughs won over their crosstown rivals for the first time as Bears, winning 30-20.

“This game brings a lot of emotion to me. It is the biggest game in the city all year. My own family has been in this for generations. I want it deeply. I wanted to show that I could do it,” said English, whose father, Gary, and brother, Andrew, played in the game. “Burbank had a better record than us in the league too. We just wanted it more, plain and simple.”

English carried the ball 24 times for 210 yards. He also completed seven of 12 passes for 78 yards and a pair of touchdowns.

Burroughs took advantage of four Burbank turnovers and helped turn those into points in the first half.

The Bulldogs got on the board first as Freddy Cardenas kicked a 27-yard field goal with 7:45 left in the first quarter.

Later in the quarter Burroughs took advantage of a Burbank fumble and started from the Bulldog 40-yard line.

Four plays later, Nate Howland-Chhina scored on a 22-yard run to give Burroughs a 6-3 lead.

The Bears took advantage of another turnover on Burbank’s next drive as Elijah Aldana-Pere intercepted Burbank quarterback Dylan Robinson and ran it back 55 yards untouched.

Burbank added a second field goal from Cardenas with 43.4 seconds left in the first half, this one also being from 27 yards out.

Trailing just 13-6 at halftime, Burbank had a golden opportunity to get back in the game as Burroughs fumbled on the first play from scrimmage to start the second half.

But that drive ended as Burroughs’ Drake Vickers intercepted a Robinson pass in the end zone.
English carried Burroughs down the field on the ensuing drive, culminating with a 27-yard touchdown pass to Aldana-Pere. with 3:55 left in the third quarter, making it 20-6.

“All year long our defense has been our staple. They came through big again tonight. It is kind of what we were hoping for,” Burroughs coach Jesse Craven said. “Luckily this time we got it going on the offensive side. When you put it together like that, we knew we could have a special night.”

Burbank (3-7, 2-3) used some trickery to get back into the red zone. The Bulldogs were able to punch their way into the end zone as Robinson scored on a 1-yard run.

But English would not be denied. Facing a fourth down and 14-yard situation, he threw a 16-yard touchdown to Aiden Berryman.

The Bulldogs were not finished though.

Robinson threw a short pass to Rony Preza that didn’t appear to be anything significant, but Preza got outstanding blocking and was able to go 84 yards for the touchdown. This made it 27-20 with 7:24 to play.

Burroughs essentially put the game out of reach with 2:53 left as Brodie Kemp kicked a 24-yard field goal. Kemp is the grandson of longtime Burbank High Athletic Director and coach Dave Kemp.

“Last week we got the takeaways. This week it was the opposite. I think we knew what we had to do, but they just played better than us tonight,” Burbank coach Adam Colman said. “We talked about it that the more physical team in the trenches is going to win. We won against Arcadia and CV by doing that. These guys were more physical than us tonight.”