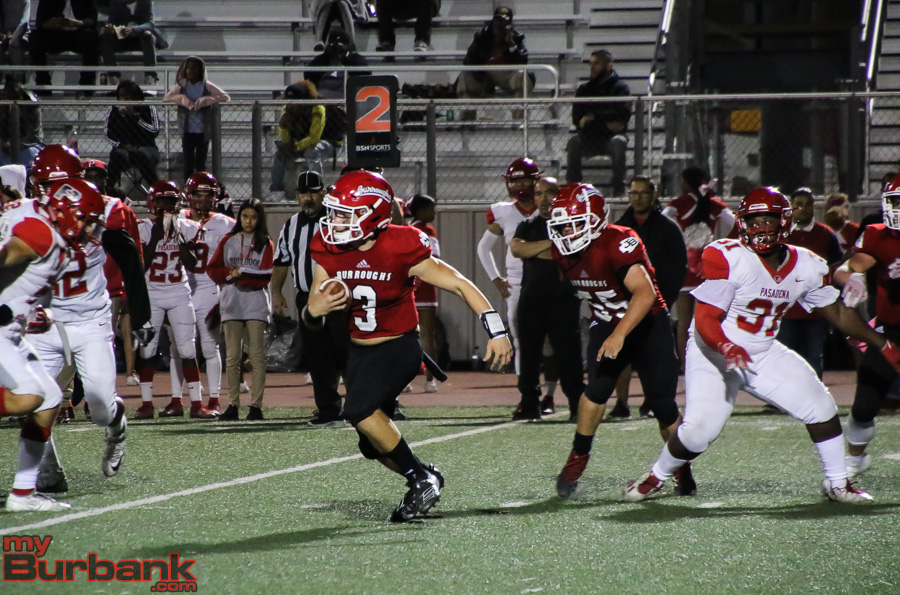 Much was riding on the outcome of Friday night’s Pacific League football game between Burroughs High and Arcadia at Dick Salter Field.

The Indians trailed after every quarter, but did get their nose in front by one point in the second period and two points in the third quarter, however, in the end came up short, falling 36-28, and will enter the regular-season finale against Burbank (4-5 and 3-2 in league) at Memorial Field with a four-game losing streak.

The setback to Arcadia really stung because a victory would have greatly helped the Indians slip into the CIF Southern Section playoffs, but now it may not occur.

At this juncture in the 10-game season, every team is banged up, but none more so than Burroughs (5-4 and 1-4 in league), which is working with about two dozen healthy players.

“We’re down to 25 guys. The only way we don’t make the playoffs is if we go 5-5. We’ve done the math,” Burroughs coach Rand Holdren said. “Our board looks like a mad scientist, but we have all the playoff things worked out and we have to go 6-4, which we knew we had to go 1-1 these last two weeks, but we have to put a whole game together.”

Against an explosive team like the defending league champion Apaches (4-5 and 2-3 in league), every able bodied player was needed.

Senior quarterback Nicholas Garcia tried his best to rally the troops, throwing three touchdown passes and rushing for a score.

“We’re not stacking good days together during the week, we didn’t come alive like we did in the first five weeks, how we did, but to be honest, we’re 0-4,” Garcia said. “We haven’t beat anybody yet.”

Garcia, who passed for 141 yards and connected on 12 of 22, addressed the next game and the possible playoffs.

“We have to come back next week and hopefully the playoffs,” he said. “We should have beat that team. They’re not that good.”

A few of Garcia’s passes were dropped and he also overthrew some of his attempts. “There’s a few overthrows today. It is what it is. We’re down to like 20 dudes,” he said. “I’m not going to blame my arm. A few they could have caught and a few I overthrew. My receivers are trying out there.”

After falling behind 13-0, the Indians cut the lead to 13-7 when Garcia, who injured his right throwing arm in last week’s loss to Pasadena, found senior wide receiver Carson Cardenaz with a three-yard pass and 6:57 left in the second period.

This play ended a march that began at the Arcadia 43-yard line and ended 10 plays later.

Burroughs, which opened the season with five straight wins, recovered the onside kick at the Arcadia 38 and after four plays led 14-13 on a 35-yard throw from Garcia to Cardenaz (70 yards on six receptions) as 5:25 remained before halftime.

Garcia was able to drive the Indians (286 total net yards) from their 28-yard line and used eight plays, capping the trek with a 26-yard pass to senior wide receiver Aiden Forrester (53 yards on four receptions) that gave the Indians a 21-19 advantage and 8:46 left in the third frame.

A 10-yard carry from Garcia (49 yards on six rushes) with 1:05 remaining in the contest ended a 55-yard, 10-play excursion and sliced Arcadia’s lead to eight points.

The Apaches took the opening kickoff and meandered from their own 41 and capped the 10-play drive with a four-yard run from senior quarterback Michael Hillier (18 of 25 for 314 yards with one pick) as 6:51 remained in the initial period.

Following a punt that gave the Apaches the ball at the Arcadia 48, Hillier’s 26-yard screen pass to senior wide receiver Ty Cavallero (66 yards on six catches) with 10:58 left before the half made it 13-0.

Hillier’s three-yard burst with 27.2 seconds remaining in the second quarter gave the Apaches (437 total yards) a 19-14 edge. This drive came after a punt, consumed 45 yards and required six plays.

Cavallero’s one-yard run saw the Apaches slide in front 29-21 and ended a march that commenced at the Arcadia 18 and saw the hosts use 10 plays.

When the Indians, who are averaging 18.5 points while allowing 38.5 points over this four-game losing skein, were stopped on fourth and 12 at the Arcadia 30 on Garcia’s incomplete pass, six plays later senior tight end Chris Wilson (57 yards on four receptions) carried the ball one yard with 2:45 left in the fray that put the Apaches ahead 36-21.