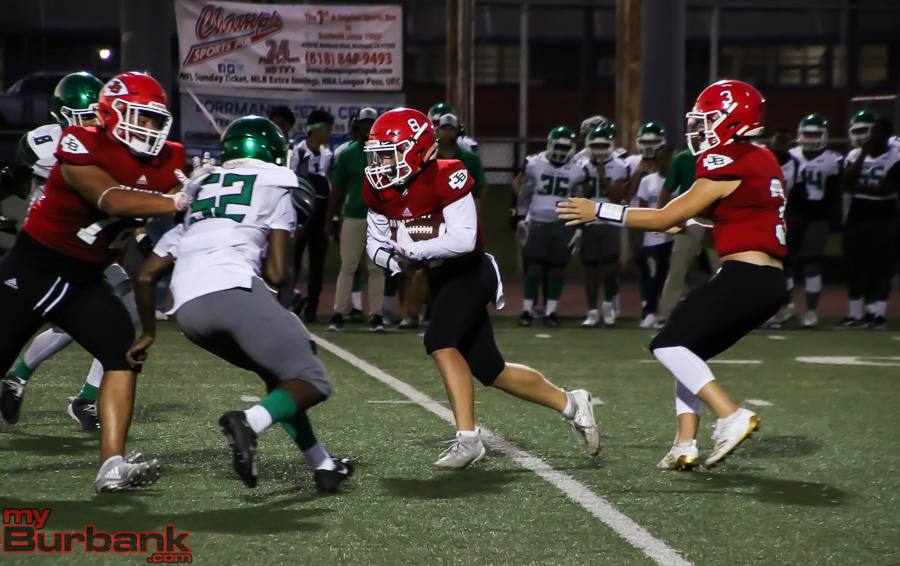 One season ago, Luke Rogers was the go-to running back for the Burroughs High football team.

Older and wiser, Rogers was expected to fill in where he left off in 2019, but this will have to wait after he sustained a fairly serious knee injury in last week’s lopsided win over Hueneme.

Luckily, Burroughs has enough talent at running back to lessen the loss of Rogers as senior Adrian Leon and sophomore Jon English both contributed mightily and helped the Indians knock off Victor Valley 46-12 in a nonleague game on Friday night at Memorial Field.

“I liked that different guys are stepping up,” Burroughs second-year coach Rand Holdren said. “We had Jon English step up. We lost Luke Rogers for the season, we got a new running back [Leon] and he steps in.”

Holdren went on: “Defensively we’re swarming and we’re creating turnovers,” he said. “Efficiency is what we strive for. That is the goal. I believe Bill Walsh in his book said the score will take care of itself. We’ve got to be efficient. I want these guys to be the best team they can be. And they’re starting to realize they can be a good team.”

Rogers, a junior, was told by several doctors that the injury could take between eight and 14 weeks, but he still hopes to contribute.

“As far as the regular season goes, it might be a stretch,” Rogers said of returning over the next eight weeks. “I’m striving to play as many games as possible.”

This would mean the CIF Southern Section playoffs, and while the Pacific League won’t start until September 20 at Glendale, the Indians are undefeated after two games, so maybe there is a chance Rogers will play.

Though disappointed, Rogers feels fine. “I feel good,” he said. “It’s tough. Putting so much preparation and hope into this year. If it comes down to not playing this year, at least I have my senior year.”

Leon (102 yards on 16 carries) ran for 75 yards on 12 rushes in the first half as the Indians bolted to a 33-6 cushion at the intermission and Leon’s five-yard spurt with 9:51 left in the initial quarter made it 7-0 as the drive began at the Jackrabbits’ 34-yard line and consumed five plays.

English (game-high 147 yards on 13 carries) had 55 yards in the first half and scored on a nine-yard run with 2:40 remaining in the initial frame as the Indians (2-0) surged ahead 14-0 as the hosts needed eight plays to trek 65 yards.

When English rattled off a dazzling 60-yard run on the first play of the third quarter, the Indians were in command 40-6.

“I’m very pumped about this game, but there’s much more to come,” said English, who added 60 yards on two receptions. “I just want to make the most of it so I came out and did what I did. Our whole team executed and that’s why I got the touchdowns.”

English then added: “One game at a time. One win at a time,” he said. “I’m just going to do what the coach tells me.”

Garcia, who has eight scoring passes, finished by connecting on 10 of 23 attempts for 201 yards and wasn’t intercepted.

Garcia’s 29-yard strike to junior wide receiver John Alajijian (33 yards on two receptions) and 10:49 left in the second quarter made it 20-0 and finalized a four-play, 37-yard drive and was made possible after a pick from sophomore defensive back Christopher Romano.

A four-yard laser from Garcia to Alajijian with 30.4 seconds left in the second quarter, capped a 51-yard, eight-play march that catapulted the Indians ahead 33-6.

A one-yard sneak from Garcia and 6:16 remaining in the opening half gave the Indians (466 total net yards) a 27-0 edge as he orchestrated a 69-yard, five-play march.

When Garcia spotted senior wide receiver Ellington Simmons for his only reception, a 22-yard pass and 5:54 left in the fourth period, Burroughs pushed ahead 46-6, ending a 90-yard, 11-play drive.

Victor Valley (1-1) was stubborn and came within 27-6 with 4:06 remaining in the first half as senior signal-caller Isaiah Padilla (31 yards on eight carries and eight of 22 for 101 yards and one pick) scored on a three-yard burst as the Jackrabbits (249 total yards) began the five-play drive at their 44-yard line.

Padilla’s one-yard sneak on the game’s final play, capped a 76-yard, seven-play march and trimmed the lead to 34 points.

The next time Burroughs plays will be Thursday at 7 p.m. on the road against Kennedy [La Palma] in Orange County.