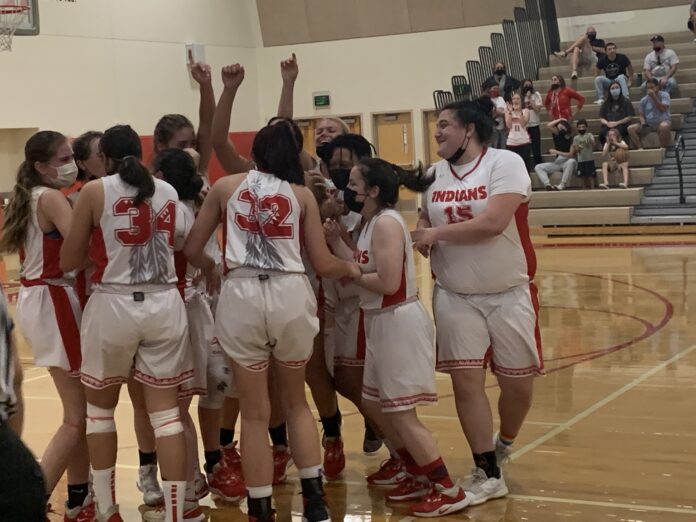 The Burroughs High girls’ basketball team had its ups and downs Monday night when the Bears hosted Murrieta Mesa High in the second round of the CIF Southern Section Division 2AA playoffs.
But Burroughs did what it needed to do when it counted, winning 42-32.

Burroughs moves on to the quarterfinals Wednesday when it will play at Downey High School.

“The last few games we’ve started out strong. We get a good lead and then we have a slight dip,” Burroughs Kayla Wrobel said. “(But) the further we get in the playoffs the harder the games are going to get and that needs to turn around and we need to play four quarters strong.”

Wrobel had 11 points and 10 rebounds for the Bears, who had a comfortable 14-3 lead after one quarter of play.
But things began to change as the Rams turned the pressure on to Burroughs.

Murrieta Mesa also was successful from the outside hitting three 3-pointers in the quarter.
Burroughs actually trailed 21-20 going to the halftime break.

“In the playoffs you are playing good teams and they are well coached and well prepared. I don’t expect to come in and expect to dominate every quarter. It is about trying to maintain momentum and at times when you do lose momentum, try to regroup and regain it and I thought we did a good job at halftime regrouping and taking that momentum back.”
A three-point play by Noor Fahs with 5:13 left in the third quarter got Burroughs back on level terms at 23 after Murrieta Mesa took a 23-20 lead.
Wrobel later hit a pair of free throws and Faith Boulanger hit a huge three pointer to give Burroughs a 28-23 cushion.

After leading 30-25 at the end of the third quarter, Burroughs scored the first basket of the fourth quarter as Boulanger found Sydney Martin inside who turned and found Wrobel under the basket to push the lead to seven.

But Burroughs’ defense held the Rams to just two field goals in the quarter.