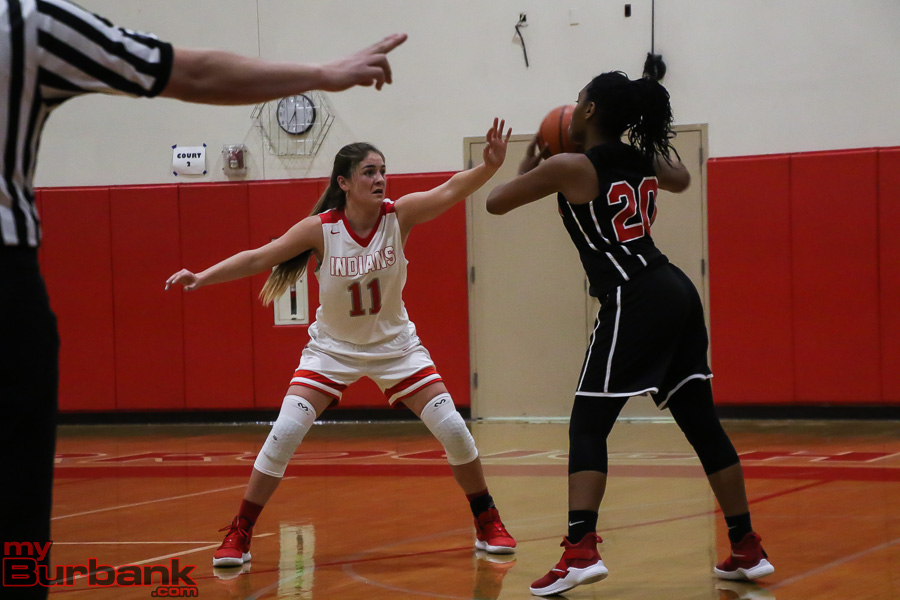 The race to the Pacific League title just got a little more difficult for the Burroughs High girls’ basketball team.

The Indians, winners of at least a share of the league title five out of the last six years, got edged out at home Thursday night by upstart Pasadena High, which rallied for a 57-56 win.

“In the fourth quarter we made too many mistakes,” Burroughs coach Vicky Oganyan said. “I thought we played hard. I liked today’s effort. Our effort was better, but we still made some mistakes.”
Burroughs (10-3, 3-2 in the league) traded the lead 12 times with the visiting Bulldogs.
The Indians led by as many as 10 at one point in the third quarter and by as much as six in the final quarter.

But the Indians were unable to maintain the momentum.
A short jumper by Kayla Wrobel gave Burroughs a 56-55 lead with 1:13 to play. Following a timeout, Pasadena’s Sydney Brumfield came back to score with 1:03 left, giving the Bulldogs only their second lead of the second half. But Burroughs would not score again.

“That’s what we’re working on. We’re trying to put together a whole game where we’re playing well offensively and defensively,” Oganyan said.
Pasadena (6-3, 4-1) received a stellar performance from junior Kamesha Moore, who scored 21 of her game-high 27 points in the second half.

“I think this team is beginning to start seeing themselves more seriously and see themselves as a contender,” first-year Pasadena coach Melissa Sanchez said. “They know they should be the team to beat. I think that building their confidence in their abilities together rather than separate has been the key focus this year.”

Pasadena jumped out to a 7-0 lead to start the game before Burroughs came back to take a 10-9 lead at the end of the first quarter. The Indians extended the lead to 31-25 at halftime.

Burroughs led 39-29 following a three-point play by sophomore Faith Boulanger with 5:45 left in the third quarter. Pasadena fought back to tie things at 44 heading into the final quarter.
Burroughs was led by Boulanger, who had 20 points, nine rebounds, and four assists. Wrobel, who is also a sophomore, had 12 points, 11 rebounds, five assists, and four steals.

Freshman Noor Fahs had 10 points for Burroughs. Dyani Del Castillo had six points. Camryn Lotka and A’sia Morales each had three points for the Indians and Nicole Rumfola had two points.