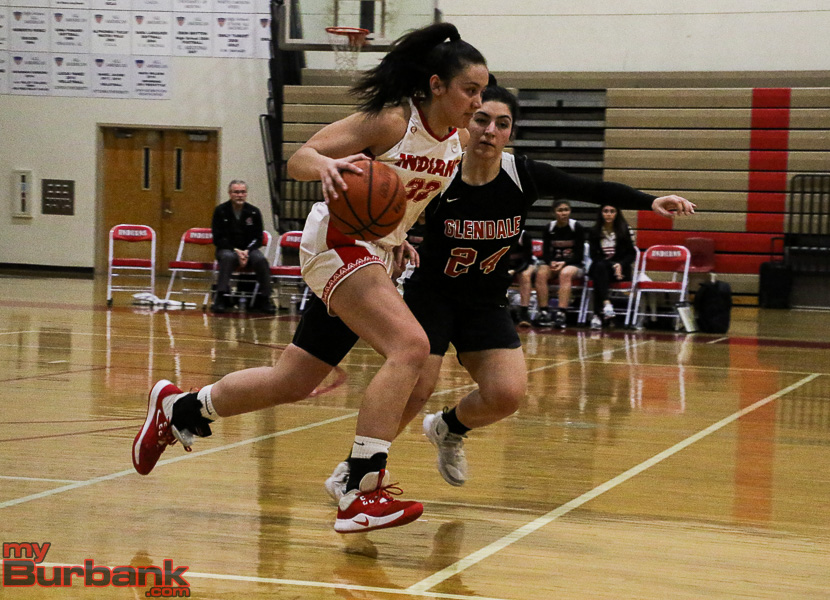 Defense was very much a priority for the Burroughs High girls’ basketball team which hosted Glendale on Tuesday night in a Pacific League match.

For 32 tough and hard-fought minutes, neither team budged an inch defensively, but down the stretch the Indians were able to make three straight baskets including a three-pointer from junior shooting guard Dyani Del Castillo with 2:20 left for a four-point advantage and it helped propelled Burroughs to a 52-43 victory.

“I was actually very nervous about this game because of the outcome of the last game,” said Del Castillo, who finished with a game-high 18 points and chipped in with five rebounds and four steals and had 11 points at the half. “We were all very prepared for this game.”

The nine-point win may have been a payback for a 47-46 loss on December 10 at the Nitro gym.

“Glendale’s big, they’re aggressive, they play hard,” Burroughs coach Vicky Oganyan said. “We knew it was going to be a tough game.”

But then six consecutive misses followed until Del Castillo’s three-pointer made it 46-42.

The Nitros (17-5 and 6-3 in league) seized a 13-11 advantage in the opening period behind five points from senior guard Mary Markaryan (eight points).

Del Castillo tallied five points in the first frame to pace Burroughs, which was outrebounded by Glendale, 34-28.

The Indians followed that with a 15-point second quarter and led 26-22 at the intermission as Del Castillo, who had five treys in the game, knocked in a pair of three-pointers, including one that made it 24-18 with 1:35 showing.

Junior power forward Kayla Wrobel tossed in three of her six points in the second period and picked off a team-best seven boards with four steals.

Boulanger’s basket and successful free throw extended the Indians’ cushion to 34-24 with 4:41 left in the third period.

Junior center Areco Orujyan scored 10 of her team-best 13 points in the fourth period for the Nitros, who made three of 10 from the field and five of nine at the free-throw line.

Senior guard Sophie Hawkins scored six points that included a three-pointer in the first quarter for the Indians.