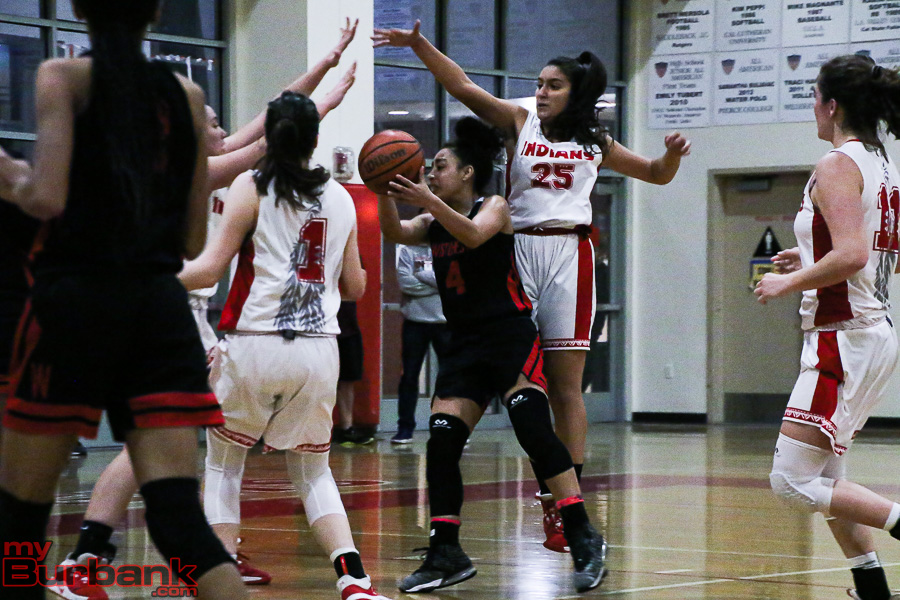 For 16 minutes, the Burroughs High girls’ basketball team kept in touch with Westchester.

The same couldn’t be said across the second half as the Comets pulled away from the Indians 59-48 in the opening round of the CIF State Southern California Regional Division III playoffs on Tuesday night at the Indians gym before a lively crowd.

“The game is about turnovers. Too many turnovers. We can’t win when we have them,” Burroughs coach Vicky Oganyan said of the 26 miscues.

Oganyan said she tried to make a few adjustments in the second half.

“We just talked how we were down one [at the half] and we had turned the ball all over the place,” she said. “We just talked about trying to calm down and make better passes and trying to get into our offense. Defensively we were hanging in there. I thought we missed some shots at critical points, wide-open layups.”

Junior power forward/center Faith Boulanger had a solid outing, scoring a game-best 18 points with a game-high 14 rebounds for the Indians, who placed second in the Pacific League and also advanced to the CIF Southern Section Division II-A semifinals.

“I’m proud of the way we improved from summer until now,” Oganyan said. “We made some big strides and we’re proud of that. For this group, I guess I’m not satisfied. We have room to improve. Hopefully in the offseason we have the same mindset. I’m proud of what we’ve accomplished, but not satisfied.”

Boulanger, who fouled out with 4:50 remaining in the contest, scored nine points in the first half after drilling three from three-point range.

Wrobel’s bucket with 2:07 left in the first quarter gave the Indians, the No. 2 seeded team in this tourney, a 9-6 lead as No. 15 seeded Westchester, which owns a seven-game winning streak and will play Viewpoint in the second round on Thursday, asked for time out.

Burroughs (25-8) trailed 25-24 at the intermission, but the Comets, who led 10-9 after the first period, dropped in 17 points in the third quarter for a 42-34 lead as freshman shooting guard Ron’Yae Jackson (eight points) nailed a pair of three-pointers.

Another 17-point frame followed for Westchester (17-15), which claimed the City Section Division I title after trouncing Carson 67-38.

In that frame, freshman point guard Rylie Waugh accounted for eight points including six coming at the free-throw line.

“It has to be multiple people doing multiple things,” Westchester coach Dominic Grimes said of the overall effort. “I told them to keep attacking the bigs. I was hoping they’d get in foul trouble and they did.”

In that final period, the Comets, who played six of the top 15 girls’ teams in the state, canned nine of 10 free throws after making one of five in the opening half.

Waugh, who picked off a team-best 13 rebounds, paced the Comets with 16 points, including 12 in the second half.

Westchester senior center Ariana Grimes, who contributed five caroms and four steals, tossed in seven of her 13 points in the first half.

Sophomore point guard Savannah Prasad added 10 points, all of which came in the second quarter.

Prasad’s second three-pointer with five minutes left on the clock handed the  Comets a 20-14 edge.

The Indians connected on nine of 20 shots in the first half for 45 percent, but then dipped to 25 percent in the second half after making seven of 28.