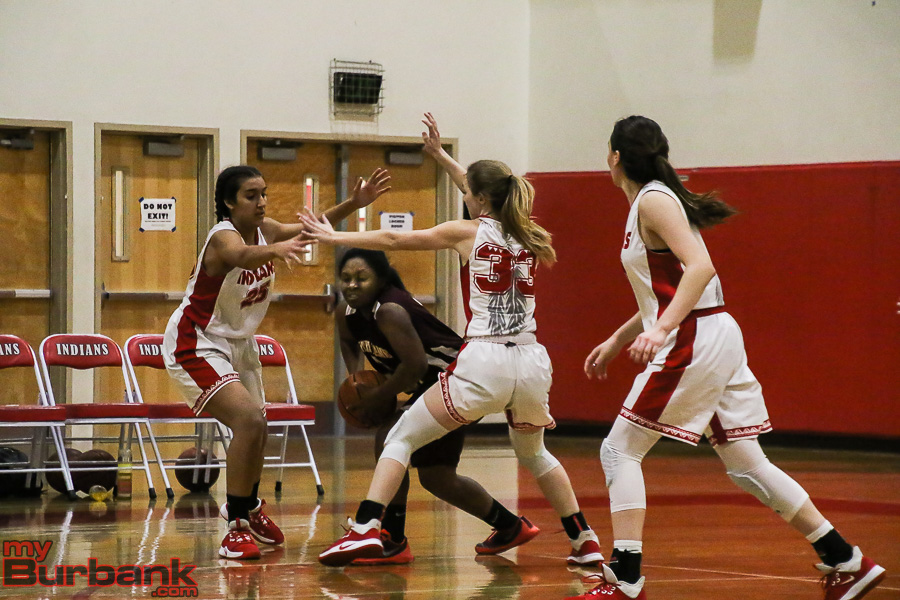 Shots were launched from deep and short and in between by the Burroughs High girls’ basketball team.

There was enough success despite shooting 26.3 percent from the field and it led to a 51-30 triumph by the Indians over Notre Dame Academy in a second-round match of the West Coast Holiday Festival Tournament Silver Division on Friday night at the Indians gym.

On the plus side, the Indians collected 58 rebounds compared to 25 for the Royal Gryphons.

“We moved the ball well and we looked for each other and we got a lot of open shots,” Burroughs coach Vicky Oganyan said. “We’re a good rebounding team.”

The offense was spearheaded by junior point guard Dyani Del Castillo, who poured in a game-best 13 points.

Junior power forward Kayla Wrobel added 12 points and grabbed a game-high 16 rebounds. Wrobel scored all of her points in the first half.

The Indians outscored Notre Dame Academy, which made four of 13 for 30.7 percent at the intermission, in every quarter except the fourth.

Burroughs quickly seized command and barreled ahead 16-6 heading to the second quarter behind 10 points from Wrobel, who scored nine points in an opening-round 68-40 victory against Santa Paula on Thursday.

Sophomore shooting guard Noor Fahs scored four of her six points in the first period when the Indians made eight of 27 from the floor.

In the second frame, Burroughs didn’t take nearly as many shots from the field, just 16 and hammered in six and pulled in front 33-12.

Del Castillo, who scored a game-high 10 points versus Santa Paula, was the offensive catalyst in the second period scoring six points, while drilling a pair of three-pointers.

Boulanger dropped in two three-pointers for six points in the third quarter and had a game-best 16 points against Santa Paula.

Del Castillo also had a trey in the third quarter when the Indians made four of 18 from the field.

Freshman shooting guard Ivana Razov drilled a three-pointer in the third frame which accounted for her only points, but handed out a game-best five assists.

The Regal Gryphons shot 30.3 percent from the floor on 10 of 33 for the night and outscored the Indians 7-6 in the fourth frame as Kaylin Chan nailed her third three-pointer of the evening and finished with a team-best nine points.

Brooklyn Jackson also scored a three-pointer in the final frame and finished with eight points for Notre Dame Academy.

Burroughs converted five of 10 from the free-throw line and Notre Dame Academy was successful on four of nine.