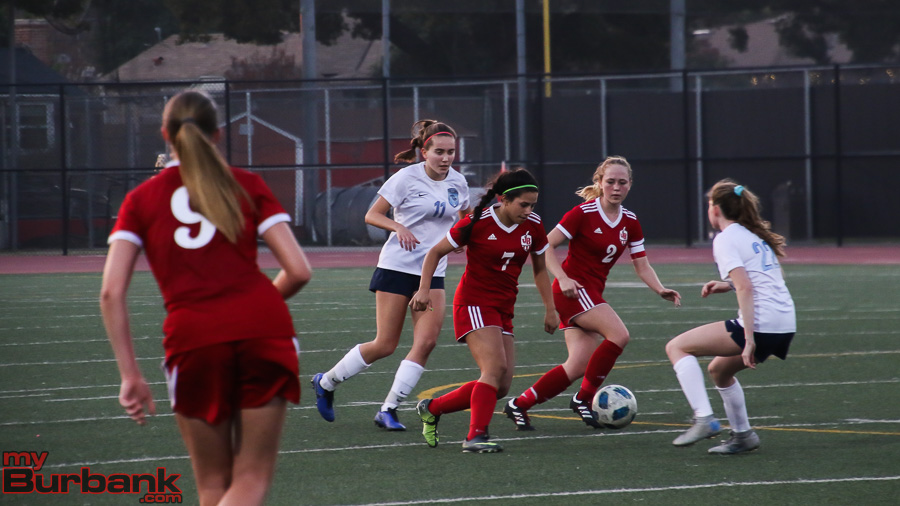 A goal was scored early and a goal was tallied late in Friday’s Pacific League clash between a pair of girls’ soccer heavyweights at Memorial Field.

The second tally, a header in the 77th minute, by Lily Gonzalez, practically guaranteed the match between defending league champion Burroughs High and Crescenta Valley would end in a 1-1 deadlock.

The match-tying goal was set up on a corner kick from junior forward Lauryn Bailey, who directed the ball perfectly so that Gonzalez’s 10-yarder would land directly into the net.

“[Lo] Lauryn and I were just like pushing each other to get that goal in,” said Gonzalez, a junior midfielder. “We know we needed that goal to tie and CV’s one of our hardest competions out there and that was like one of the last plays of the game.”

Gonzalez then added: “I had to put everything in it, so I decided to head the ball because it was going right toward me. I had a girl on me and then I kind of backed up and headed it.”

Bailey realized the importance of the match and situation. “”I knew it was a chance to tie up the game, so I knew I had to place it the right way, inside the sticks,” she said.

The only other score came in the fifth minute when Crescenta Valley senior Sarah Gabon received a corner kick and upon locating the ball, squared it and drilled a 15-yard rocket that handed the always-tough Falcons a 1-0 lead.

Today Burroughs is playing a doubleheader in the prestigious Best in the West Tournament and will face Downey and Murrieta Mesa.

Crescenta Valley is also in the Best in the West tourney and will play Royal and Beckman on Saturday.

In between these two tallies there were more than enough opportunities for both sides to find the back of the net, but neither did.

Nothing developed off a corner kick by Falcon senior Kathryn Thamasian in the fourth minute.

In the 14th minute, Gonzalez ripped a 35-yarder which was followed a minute later by Thamasian’s corner kick and junior Ashlin Cuesta’s 15-yard header failed to find the net for the Falcons.

Bailey’s 46-yard free kick came up short in the 17th minute and in the 22nd minute three Indians tried their luck, but likewise came up empty as Gonzalez blasted a 20-yarder, Bailey a 20-yard follow-up and senior midfielder Olivia Cashman unloaded a 35-yarder.

The match, per usual when these two giants take the pitch, was physical at times. Several girls on both teams found themselves on the grass including Cashman, who was kicked in the back of her leg and after a minute or so prone, walked off the field and had her right ankle retaped.

In the 26th minute, Gonzalez unloaded a 25-yard bullet and a minute later junior Julianna Cheney added a 25-yarder for Crescenta Valley.

Senior defender Alex Mills delivered a 29-yard penalty kick in the 34th minute for the Indians that sailed too high over the crossbar.

Four minutes later, Bailey tossed in a 20-yarder and then a 23-yard free kick in the 39th minute, while Gonzalez missed from point-blank range in the same frame.

“Definitely with CV we want to play harder because they’re one of the top along with us,” Bailey said. “They’re physicality just wants us to mentally play harder.”

Crescenta Valley junior Dana Ryan’s 25-yard strike in the 45th minute ventured high and Thamasian’s 25-yarder missed in the 50th minute as did Cuesta’s header in the same stanza. Gonzalez added a 10-yarder in the 52nd minute.

The Indians had the next three opportunities and included a 35-yard boot from Bailey in the 62nd minute, Gonzalez on a 25-yard penalty kick that struck the top of the net in the 67th minute and Gonzalez’s 30-yarder that drifted wide right in the same frame.

The Falcons had the next two strikes and they both came in the 74th minute as Cheney’s 35-yarder drilled the football right upright and Cheney’s 30-yarder also failed to locate the net.