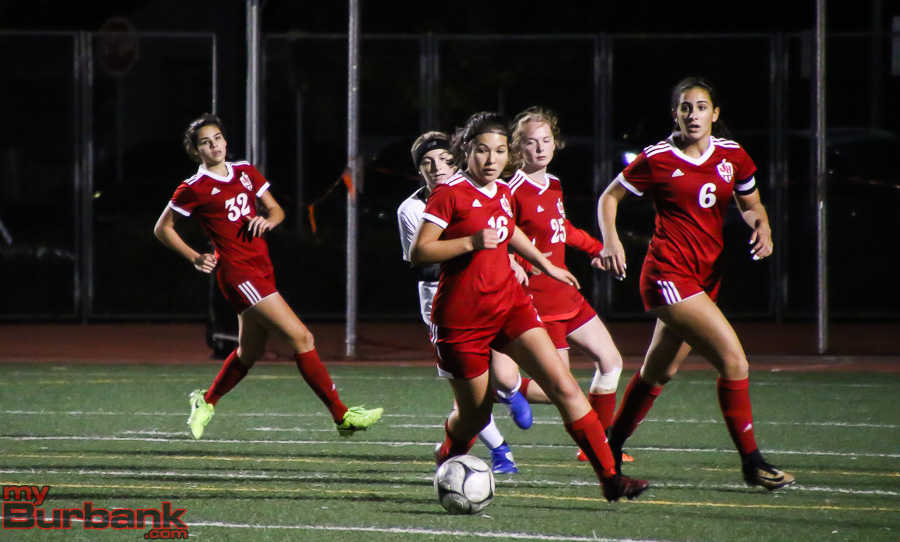 In only a handful of matches this season did the Burroughs High girls’ soccer team fall behind at the intermission.

On Friday night at Memorial Field in a CIF Southern Section Division IV playoff clash with Hemet, the Indians did and it cost them.

Despite two second-half goals from Lauryn Bailey, Burroughs’ season came to an end after falling 4-2.

“They were very strong in the back. They’re a good team,” Burroughs coach Brady Riggs said of Hemet. “Hat’s off to them. We didn’t lose to a team that we’re better than, for sure. We lost to a team that deserved to win.”

Riggs then added: “From my perspective, I couldn’t have asked for a better year. To achieve our goal of winning [the Pacific League] is awesome. I’m thrilled with the season and the kids,” he noted.

This historic campaign by the Indians (16-4-2) will long be remembered, given they claimed their first league banner in 26 years and also advanced to the second round of the playoffs.

Still the loss stung and was clearly evident on some of the seniors’ faces, including Abbie Riggs, a gritty and skilled player who put every once of energy and strength into each match.

Riggs, one of four captains, had a 37-yard free kick that came close, hitting the top of the cross bar in the 77th minute.

“We still won league. That’s cool. I’d like to go further to get Lily [Gonzalez] on the field,” said Riggs, a midfielder. “We lost speed in the back. It put a lot of pressure on the mids [midfielders]. We lost a defender. We were weak in the back and weak in the front. We were not our normal self.”

Burroughs was missing Gonzalez, a sophomore midfielder who turned her right ankle in a 4-1 victory over Artesia on Wednesday in the opening round, and also junior defender Ava Kramer.

Besides the two goals, Bailey also had a potential tally from 10 yards in the 26th minute that hit the right goal post.

“We ended on a good note,” said Bailey, a gifted forward and captain. “We made it far. We wished we could have gone farther, but we all worked our hardest. We knew coming in they were a good team. We had players down, but that couldn’t let us play bad.”

There’s a reason Hemet (21-2-5) is the No. 3 seeded team in these playoffs and the No. 168th ranked team by the national sports website maxpreps.com, as junior midfielder/forward Payden Searl knocked home a 10-yarder in the 42nd minute for a 3-0 lead that slipped past junior goalie Stephanie Martinez.

Searl later scored on a 10-yarder in the 54th minute to make it 4-1 that also eluded Martinez.

Bailey’s goal from 35 yards in the 45th minute sliced Hemet’s advantage to 3-1.

In the 66th minute, the Indians, ranked No. 237 by the same website and seeded No. 11, inched closer as Riggs’ 45-yard free kick found Bailey, who positioned herself to unload a 10-yarder that found the back of the net, cutting Hemet’s lead to 4-2.

The Bulldogs, who entered the fray with a nine-match non-losing streak, played marvelous defense, especially when the Indians were close to moving the ball into the box.

“Early in the match I think we weren’t pressing as hard as we should have, marking our man,” she said. “We just had to get in the groove. There’s a lot of chances, but it didn’t happen. I’m really glad we won league this year. That was a big deal for us.”

The Bulldogs took a 1-0 lead in the 21st minute on a 15-yard tally from junior forward Reese Castanon that evaded freshman goalie Kaylin Casper, who was lifted in the second half.

Hemet’s lead became 2-0 on a 15-yard goal by freshman midfielder/forward Elisha Avila in the 29th minute on a pass from Castanon that Casper couldn’t corral.

Junior midfielder/forward Shadyn Skinner had a 20-yarder in the second minute for Hemet.

Freshman forward Megan Schmidt, who left late when she was involved in a head-to-head collision, drilled a 15-yarder in the third minute for the Indians, who came into the match having won nine consecutive games.

At times the contest was physical, as Burroughs sophomore defender Gabby Morales, also a captain, left with about 15 left after a head collision.

Castanon missed from 20 yards in the ninth minute and Bailey answered with a 25-yarder in the 12th minute.

Searl’s long pass was nabbed by Skinner, who then unloaded a 10-yarder in the 15th minute.

At this point, the Indians dominated the action as Bailey’s 25-yarder in the 30th minute went slightly left of the goal while Burroughs junior forward Megan Knutson’s 15-yarder also scooted wide left.

Valencia’s 47-yard free kick in the 37th minute came up short while Riggs’ 10-yarder missed in the 39th minute and Knutson’s 10-yard header also failed to locate the target in extra time.

Skinner had a 15-yarder hit the goal post in the 43rd minute and Valencia added a 40-yarder in the 51st minute.

In the 59th minute, junior midfielder Olivia Cashman had a 35-yard free kick for the Indians and then found the ball and blasted a 20-yarder.

Castanon had a 25-yarder in the 60th minute, teammate and sophomore defender Anna Melendrez tacked on a 35-yarder in the 63rd minute and Bailey’s 25-yard penalty kick in the 72nd minute drifted too high.