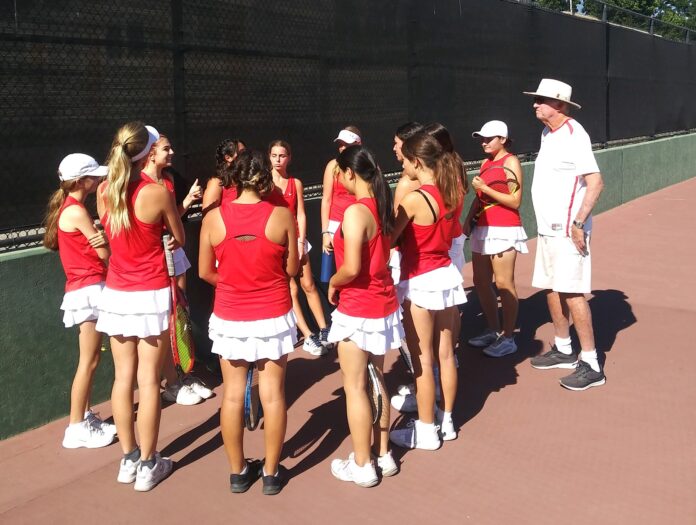 Nearing the halfway point in Pacific League action and a meeting with its cross-town rival looming, the Burroughs High girls’ tennis team continues to try to piece things together.

The Bears find themselves jostling with a couple of league opponents in their quest to grab a top-four spot in the seven-team league and earn an automatic spot in the CIF postseason.

Burroughs turned to its three singles players to help turn things around, as the trio combined to win all nine sets in a 17-1 league home win versus Pasadena on Thursday.

Burroughs, which finished fourth in league last season before falling to Rancho Cucamonga in a CIF Southern Section Division III wild-card match, got three wins apiece from singles players Elane Shayne, Hannah Lewis and Aly Stoliker. Shayne won, 6-1, 6-0, 6-0, Lewis won, 6-1, 6-2, 6-0, and Stoliker completed the sweep at 7-6(9-7), 6-0, 6-0 and provide the Bears with some confidence heading into their league road contest against Burbank at 3:30 p.m. Tuesday.

“They went out there today and played well and that’s what we needed,” Burroughs coach Roy Bernhardt said. “We lost a league match to Hoover (13-5 on Sept. 12) and I think that caught us off guard a little.

“We are going to have to find a way to beat Hoover by a great margin then they beat us and then beat Glendale a second time in order to have a shot at making the playoffs.”

Pasadena got a doubles 6-2 victory from Michelle Cortez and Thea Bongoloan.

Mazarei, a senior, said the Bears are looking for more consistency.

“There are things we do well and things we need to work on because we want to be one of the top four teams in league,” said Mazarei, one of three team captains. “We have the ability to put things together and I think we are in a better mindset with the win today.

“I think we were a little too cocky going into the match with Hoover. We were not ready to play them. We’ll try to learn from that.”

Burroughs and Pasadena will meet again Oct. 13 at Pasadena.