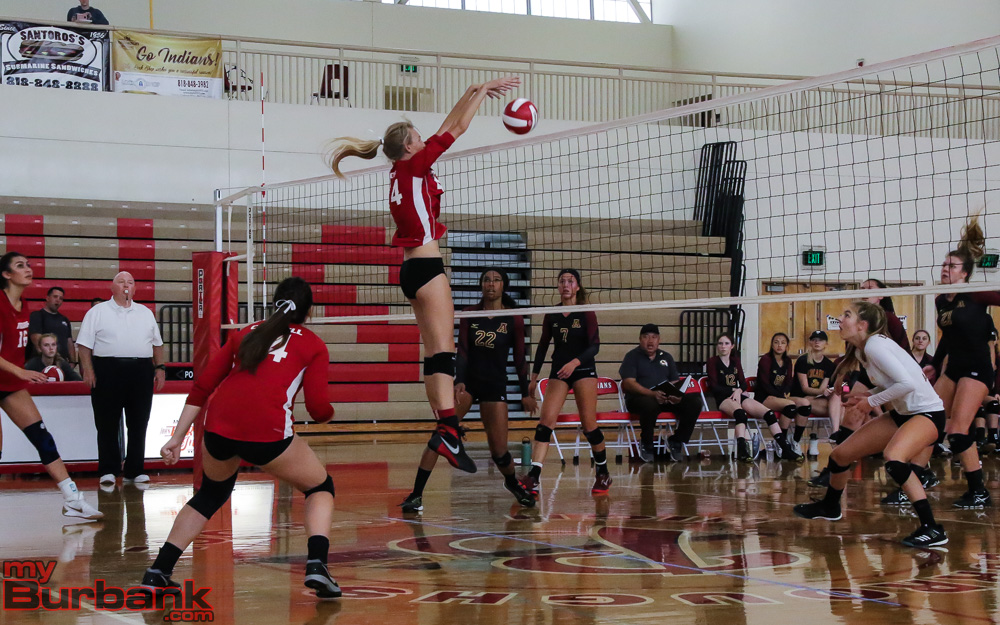 At least recently, when it comes to the Pacific League girls’ volleyball race, most of the time Burroughs High and Arcadia are near the top of the standings.

The Indians played well in the second frame and were tied 17-17 in the third set on senior outside hitter Marin Grote’s tapper.

It was also level at 18-18 on outside hitter Lydia Grote’s kill.

“I think the first and second games we were definitely really, really excited, and we were all playing really well as a team, I think,” said Grote, a sophomore. “In the third game, we kind of stopped communicating to each a little bit more. We weren’t playing the best that we could have been.”

Grote added: “I think we did that really well [communicate] in the second game and then in the fourth game there was no talking on the court. We stopped playing as a team. We started playing one individual player on the court.”

Arcadia (5-2 and 3-1 in league) gathered itself and outscored Burroughs 7-1 with the clincher Lydia Grote’s shot hitting the net.

Grote felt there was a lesson to be learned. “I definitely think we are better than what we played tonight,” she said. “I think we did lose communication in the third and fourth sets and if we had kept it together, I think we’d have stayed more excited and more up and we’re making less errors.”

Grote continued: “I think that next time we play them we’re definitely going to be better at communicating. We’re going to get every ball.”

The Apaches pulled in front 5-0 in the third game on a kill from senior opposite hitter Hannah Ruiz (12 kills).

Digging deep, the Indians rallied and evened it at 9-9 on freshman outside hitter Catie Virtue’s service ace.

Arcadia then bolted in front 15-10 on a smash from senior outside hitter Hannah Kennedy (match-best 23 kills).

Estrada went on: “Whereas if we’re going against such a great school, we already know, hey, they’re going to challenge you guys. I mean we play against a lot of schools in our league and they haven’t challenged us. A game like this is awesome because these girls can actually go point by point.”

Burroughs then jumped out to an 11-9 advantage on Marin Grote’s smash as the Apaches asked for time.

Arcadia tied it at 13-13 on a bullet from senior outside hitter Ashley McDonald (five kills) and led 18-15 on a service ace from junior libero Haley Kennedy (16 digs).

The Indians evened it at 21-21 on Marin Grote’s spike which forced the Apaches to call a time out.

It became 23-22 on Marin Grote’s kill and her rifle shot clinched the set and evened the match at one game apiece.

“Coming out of the second game we had a lot of momentum going into the third and then we flopped,” Burroughs coach Edwin Real said. “We gave them six points in a row, so we’re down 6-0. We had to crawl back to tie it up at 18, then they got seven in a row.”

What does Real need to do in order so that an opponent doesn’t go on prolonged runs?

“We need to be better in practice at not letting that happen,” he noted. “Because we practice that. And we’re not very good at that.”

The initial set was deadlocked at 3-3 on a kill from McDonald, but the Apaches went on an 8-2 spurt that included an ace from Ruiz as Arcadia took control 11-5.

When Haley Kennedy delivered a service ace it became 16-8,.

Arcadia junior middle blocker Ayala Plummer’s rocket made it 20-12 which prompted the Indians to call for time.

The Apaches moved ahead 23-13 when junior opposite hitter Shea McGovern’s hit sailed out of bounds and the set was iced on McDonald’s kill.

“The only good thing about it is that we’re still in the hunt,” Real said. “We have to beat everybody else from now on.”

The Indians have time to work on some things before facing Arcadia on Oct. 12, with a 3:30 p.m. start time.