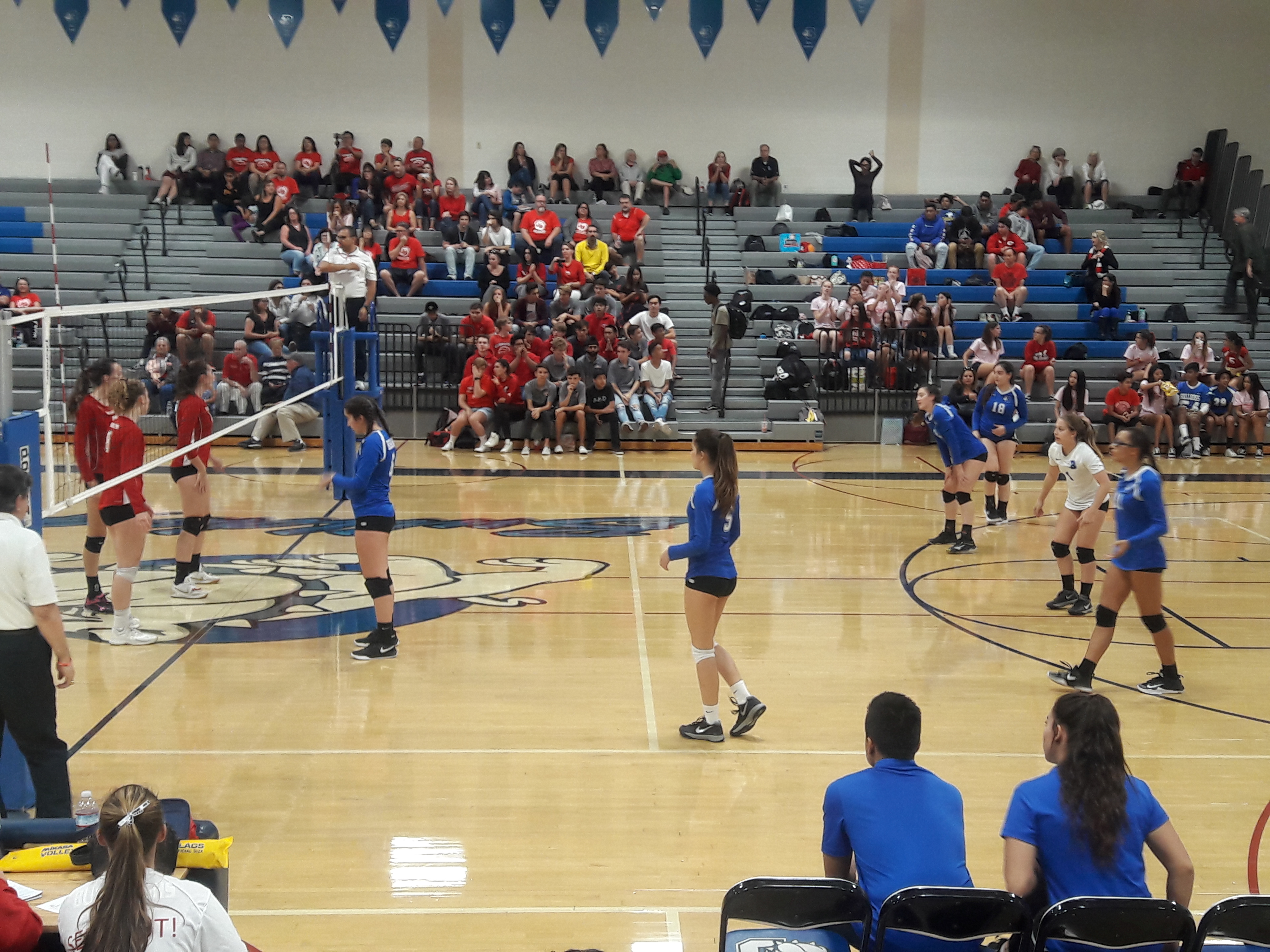 Prior to the Burbank High girls’ volleyball team facing visiting Burroughs on Thursday night in the Pacific League regular-season finale, each had played splendidly over the course of many matches.

The Bulldogs had captured six of seven while the Indians won 11 of 14, so the showdown was expected to be tight.

Both squads will have its season continue in the CIF Southern Section playoffs which begin next week.

Grote opened the fourth set for the Indians, who tied for the league title with Arcadia, by scoring the first four points and the lead then swelled to 7-2 on Van Loo’s spike.

Sophomore outside hitter Catie Virtue’s back-to-back spikes then pushed the Indians’ advantage to 13-4.

Van Loo and junior middle blocker Camila Sanchez-Tellez later combined on a block for a 14-4 edge.

Sophomore defensive specialist Lily Rogers added a kill for the Indians, who surged ahead 18-8 and when Grote tossed in a spike, it was 21-10.

Senior defensive specialist Ava Cannon’s winner made it 24-13 and Van Loo’s bullet gave the Indians the set and match.

Virtue then added an ace that made it 15-9 and Rogers contributed a service winner for a 17-11 cushion.

“We had trouble with the service. Just couldn’t get the ball to the hitters,” Burroughs coach Edwin Real said of the third set. “Shea really started to set a little bit better. I told her to focus on her setting and not so much on her blocking. Just worry about your setting.”

McGovern is a senior setter and the quarterback or point guard on the floor for the Indians.

Senior outside hitter Amaya Broyls (seven kills and 11 digs) then cut the lead to 21-16 with a kill for the Bulldogs.

The Indians claimed the next four points as Virtue added a kill and an ace, Sanchez-Tellez a spike and Broyls hit the ball out of bounds for the set.

“Overall I’m pleased with how the season went,” Real said. “Just that one match against Arcadia was a little dip. We’re a lot better than that now.”

That initial meeting with the Apaches took place on Sept. 11 as the Indians lost in four sets.

Burroughs then bounded ahead 5-2 in the second set after Grote and senior middle blocker Maggie Harris had a combined stuff.

The Bulldogs came within 8-5 on a kill from junior outside hitter Katie Treadway (match-high 17 kills with four aces and 10 digs), but Virtue’s tapper gave the Indians a 9-5 lead.

Grote’s laser made it 17-14 in favor of the Indians as the Bulldogs asked for play to be halted. An ace from junior middle blocker/opposite hitter Leah Tawil (two kills and two aces) leveled it at 17-17 and then 21-21 on a kill from Broyls.

“We had some good momentum going in,” Burbank coach Karl Rojo said. “I thought our passing was a little bit better. We started executing in the slots we were giving them.”

Rojo said the start in the fourth set made it difficult. “The fourth was tough,” he noted. “They came out with a lot of firepower. We just couldn’t respond back. We need to capitalize on the chances we have, especially our hitters.”

“After Arcadia we knew we had two more games to go,” said senior opposite hitter Van Loo, who finished with a team-best 16 kills. “We’re just going to push for the win. That showed in the first, second and fourth set.”

Van Loo’s service winner made it 24-21 and a mishit from Treadway handed the set to the Indians.

“I think this team is really great,” Van Loo said. “Our passing. Our setting and hitting is consistent. I think we can be even better and we can do well in the playoffs.”

The third game was tied 2-2 on an ace from Treadway and 4-4 on a kill from senior defensive specialist Izzy Sanchez.

Senior middle blocker/opposite hitter Olivia Price (five kills) had a spike that evened it at 6-6, but the Indians dashed ahead 9-6 on a blast from Van Loo.

An ace from senior opposite hitter Jolene Soliman handed the Indians a 12-8 lead as the Bulldogs called for time.

But the Bulldogs outscored the Indians 8-4 and evened it at 16-16 on a kill from junior setter Ashley Eskander (33 assists with seven digs and three aces) as the Indians asked for a stoppage.

Burbank then scooted ahead 18-16 and 19-16 on consecutive service aces from Treadway.

Grote’s tapper cut Burbank’s lead to 19-17, however, the Bulldogs waltzed ahead 24-20 on Treadway’s kill.