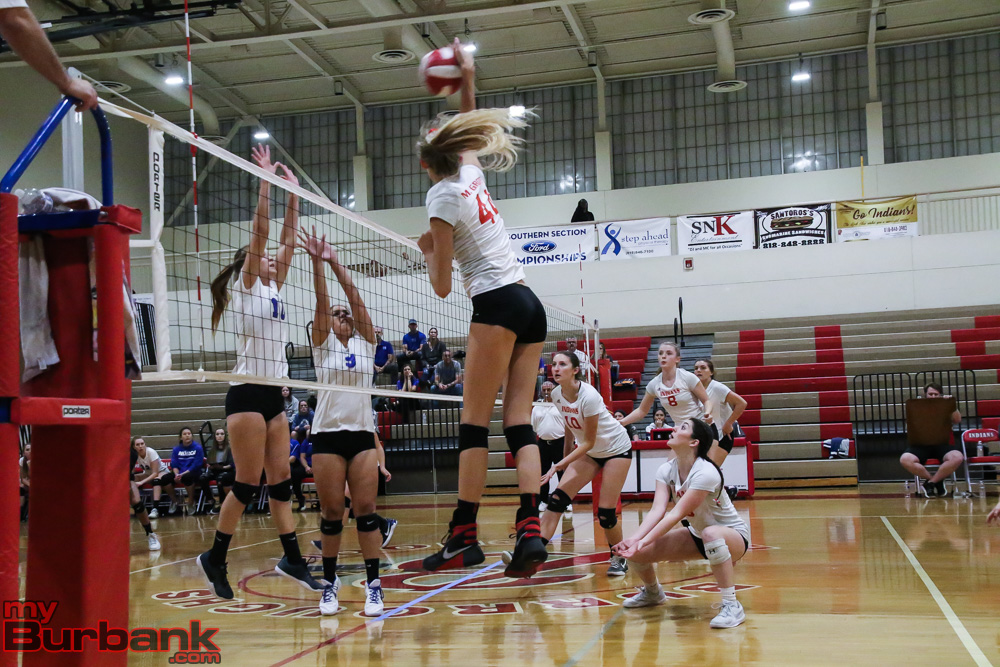 No postseason match is ever easy, but the Burroughs High girls’ volleyball team had a relatively smooth ride over visiting Norco on Tuesday night.

Burroughs, which claimed the Pacific League, has a second-round home game versus Westridge on Thursday.

The Indians were led by senior outside hitter Marin Grote with nine kills.

“I felt good about how we started and how we progressed throughout the match,” said Burroughs coach Edwin Real, whose team reached the quarterfinals in 2016. “One of the goals in this game was to get off to a fast start.”

The clinching game was tied at 2-2 and 3-3, but the Indians then rattled off six straight points including a service ace by Grote that made it 9-3.

Burroughs then seized control at 10-5 on a winner from Van Loo and darted in front 16-9 on a tapper from senior opposite hitter Jewel Musich.

Van Loo’s kill made it 18-11 and senior outside hitter Julianna Cottrell’s tapper put the Indians ahead 20-12.

Burroughs then outscored the Cougars (11-12) 5-2 that included a stuff by Van Loo for the set and match.

“They were pretty relaxed,” Real said of his squad. “They weren’t nervous at all, which is a good thing. It’s a more relaxed atmosphere. The crowd wasn’t huge. It’s like another Pacific League game for us.”

The Indians were dominant in the second set as they took control 4-1 on Grote’s winner and 6-3 on another kill from Grote.

When junior opposite hitter Shea McGovern had a service ace, the advantage swelled to 7-3 and it became 11-5 on Van Loo’s spike.

The Cougars drew within 13-10, but sophomore outside hitter Lydia Grote’s kill made it 14-11 and Marin Grote’s smash put the Indians in front 15-10.

A winner from Musich saw the Indians seize a 17-12 edge and a kill from junior middle blocker Maggie Harris pushed the Indians (24-6) in front 20-15. When Harris contributed a spike, the margin was 23-15.

Marin Grote is the best player on the team, but the Indians have other weapons, according to Real.

“We try to work the others in practice. That way they’re all ready,” he said. “You’ve gotta run your routes because Marin’s not going to get them all.”

Cottrell’s kill shoved the Indians in front 24-15 and a stuff from Harris ended the set.