For the second time this season, the Burroughs High girls’ volleyball team took out Crescenta Valley in three games.

So there was nothing too unusual in the 25-18, 25-23, 25-18 Pacific League road victory by the Indians on Tuesday despite each team having the same record in league play.

The Indians were able to wear down the Falcons from the outset in the battle for second place. Meanwhile, powerful Arcadia sits atop the league standings. 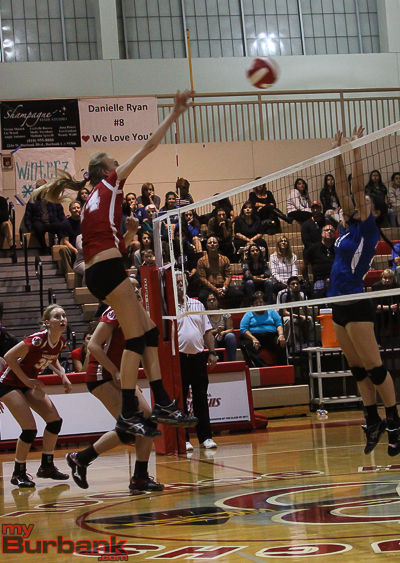 Outside hitter Marin Grote, shown here against Burbank, had a match-best 21 kills versus Crescenta Valley. (Photo by © Ross A. Benson)

“I know we won in three, but I thought we played somewhat tentative, especially in the first game,” Burroughs coach Edwin Real said. “It [being tentative] changed about half way through the second game. We have to play well because they’re good.”

Burroughs was able to secure 12 points when Paster was at the service line which tilted the match in the Indians favor.

Van Loo’s kill evened the second game at 3-3, but the Falcons moved in front 12-8 on a kill from junior Patty Kerman.

It was level at 19-19, but Burroughs rallied and went on a 6-4 blitz that included kills from Grote to make it 24-22 and Grote’s slam to secure the set. 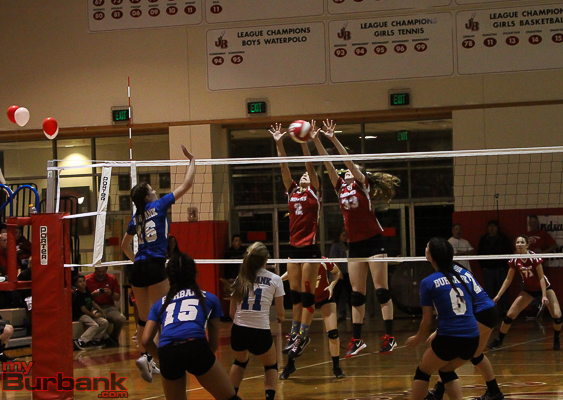 Middle blocker Caleigh Paster (#33), pictured in a match against the Bulldogs, delivered five kills versus the Falcons. (Photo by © Ross A. Benson)

The Indians seized control 5-1 on a tapper from Grote in the final set which forced a time out from the Falcons.

From this point, it was clear that a sweep seemed likely and it was as Burroughs pulled ahead 8-4 on Grote’s dagger.

In short order, the Indians claimed the set and match on Cottrell’s kill and Paster’s bullet ice the victory.

“We were a lot more relaxed and not too hyper,” Cottrell said. “We’re much better when we play that way so we can focus on what we have to do.”