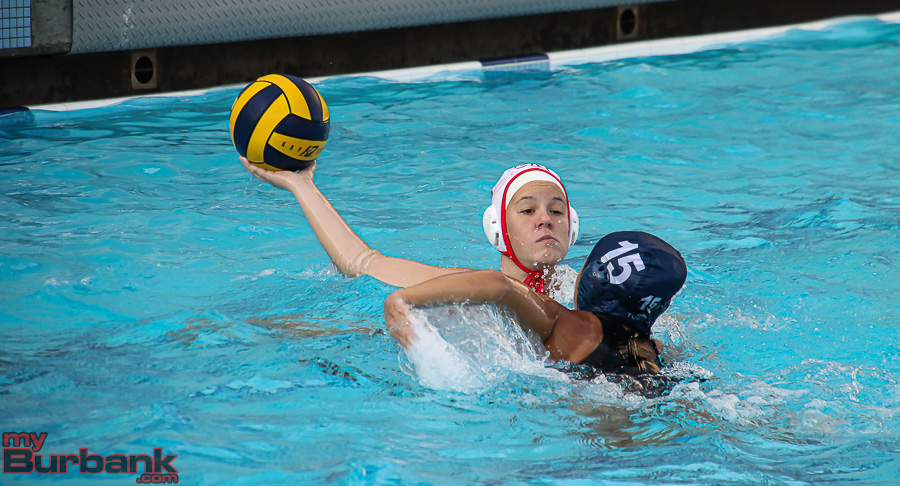 An early first quarter drought by both host Burbank High and rival Burroughs was followed by a lopsided second half as the Indians outscored the Bulldogs 6-1 and waltzed to a 9-2 Pacific League girls’ water polo win on Wednesday afternoon.

With the victory by Burroughs, it improved to 16-5 overall and 4-2 in league action, while Burbank is 10-8 in all matches and 2-4 in league.

Burroughs senior goalie Emanuella Nathan, who will be playing for the University of the Pacific, had a stellar outing, savings numerous attempts in spectacular fashion.

“We started out a little slow. It took us a little bit to get our rhythm down and get going,” Burroughs coach Jacob Cook said. “It took the first quarter to get our bearing and then we made it happen. And then we started putting the ball away and doing what we needed to do.”

Three of the match-best five goals that sophomore Clarissa Robles scored came in the second half.

A 14-foot attempt by Robles with 1:53 left in the third quarter extended the Indians’ advantage to 5-1.

When Robles canned a five-meter penalty shot with 20 seconds left on the ticker, Burroughs surged ahead 6-1 in the third period.

Robles tacked on another five-meter penalty attempt with 5:35 left in the fourth period as Burroughs drifted in front 8-2.

A five-meter penalty shot by Robles with 5:30 left in the second frame made it 1-0 and a 14-footer by Robles pushed the lead to 3-1 as 49 seconds remained before halftime.

Burroughs freshman Nancy Baylor accounted for two goals and occurred with 4:20 showing in the third stanza on an eight-footer for a 4-1 cushion and with 2:21 remaining in the match that made it 9-2.

Sophomore Emily Callahan’s goal from 14 feet and 3:10 left on the clock pushed the Indians’ lead to 2-1.

“I think it was beautiful defense in the first half for my team, but then they fizzled out. They lost their juice. Lost their energy,” Burbank coach Melani Aghazarian said. “Even though they [Burroughs] were only up by two goals, the girls let it get to their head and they got discouraged.”

“We have to work on being more aware,” Aghazarian said. “The clock is a big thing in water polo. It’s going to take time. We’re rebuilding. I’m proud of them for what they did in the first half.”

Aghazarian then added: “I hope next year we really step it up and hopefully in the league tournament,” she said.

Aghazarian, the first-year coach, isn’t discouraged and envisions brighter days ahead. “It’s a rough score but I’m just trying to get the girls competitive and ready for the tournament,” she noted.

Burbank senior Sera Shabhazian, who three days prior accidentally slammed her thumb in a car door, has been around the program for years and is one of the Bulldogs’ most-skilled players.

“Today wasn’t my best because of my thumb. I couldn’t play my best and I feel guilty. I sprained my thumb, so I just tried my best,” she said. “This year coach Mel has taught us a lot. Because I want to move on I’m taking a lot of practice and I want to play at LAVC (Los Angeles Valley College). But we’ve improved a lot.”

Junior Angelina Lee’s 14-footer found the back of the net with 6:10 remaining on the clock in the fourth quarter as the Indians led 7-2.

Sophomore Julie Kim scored two goals for the Bulldogs as she tossed in a 12-footer with 4:21 left in the second period that evened it at 1-1 and added a 16-footer with 6:31 remaining in the fourth quarter as the Bulldogs drew within 6-2.