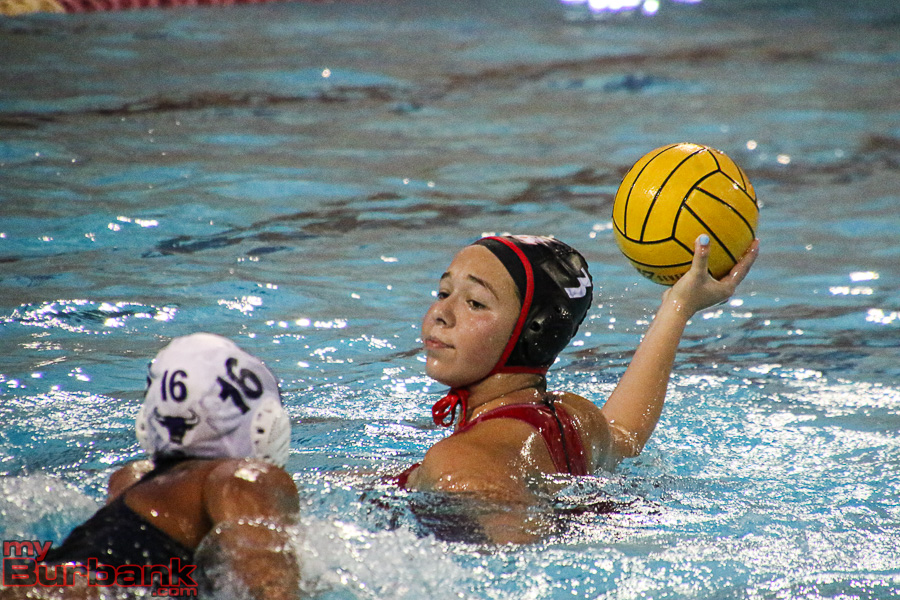 One had a real sense that late in the second quarter, slowly but surely, the Burroughs High girls’ water polo team seized control of the match.

After being tied at 3-3 with 2:44 left, the Indians scored the next two goals and never looked back in their 11-7 win over visiting Diamond Bar in a CIF Southern Section Division V second-round playoff match on Thursday afternoon.

“We played pretty good. It got a little crazy there at the end with that back and forth,” Burroughs coach Jacob Cook said. “They played great. They were putting the shots in. It was pretty evenly scored. We made the adjustments on defense after the first quarter.”

Sophomore Nancy Callahan led the way with a match-high four goals for the Indians.

Callahan knocked in a 14-foot tally with 5:08 left in the second period for a 3-2 lead and then added a 12-foot goal with two seconds remaining in the opening half for a 6-4 advantage.

Junior Angelina Lee added three goals for the Indians and they came with 4:01 left in the initial period on a 12-foot loft that tied it at 1-1 and with 3:35 left on the clock in the same frame on a 12-footer that evened it at 2-2.

Lee’s 12-foot tally with 2:42 remaining in the third quarter pushed the Indians ahead 8-4.

A 12-foot strike from sophomore Clarisa Robles with 1:03 left gave the Indians a 5-3 cushion.

When junior Charlotte Jennings found the back of the cage on a 12-footer and 4:52 left in the third period, the Indians scooted ahead 7-4.

Kaitlyn Arauz scored three goals to pace Diamond Bar and they included a 10-footer with 4:16 remaining in the first quarter as the Brahmas (21-8) led 1-0.

A 10-foot tally by Arauz with 13 seconds left in the second frame cut the lead to 5-4 and an eight-foot goal from Arauz sliced lead to 11-7 as 2:08 remained in the match.

“We had a lot of good looks. Whether it was open looks or in the half court or transition or six on five, we had the opportunities, but we just couldn’t finish,” Diamond Bar coach Devin Hunter said.

Julia Longoria tacked on an eight-footer with 2:44 left in the second quarter that evened it at 3-3.

A tally from point-blank range by Kaylee Robles handed the Brahmas a 2-1 lead as 3:46 remained in the first quarter.

Raquel Figueroa’s 10-foot goal with 2:29 left in the fourth quarter sliced the Burroughs lead to 11-6.

Burroughs senior goalie Emanuella Nathan, who will be playing for the University of the Pacific, had a brilliant outing, batting away more than a dozen shots, including a five-meter penalty shot by Arauz with 5:24 left in the third quarter.