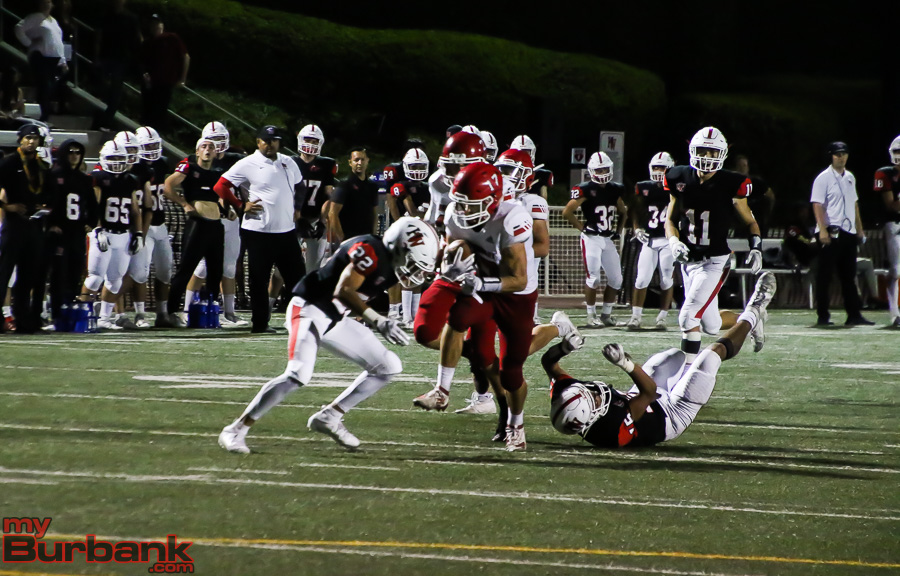 Each week there has been a hurdle for the Burroughs High football team to leap over and each week it’s ended with success.

On Friday night against Harvard-Westlake at Ted Slavin Field on the Studio City campus, the Indians used a 25-point outburst and eventually held off the Wolverines 38-21 in a nonleague game.

A season ago, the Wolverines came into Memorial Field and claimed a 24-point victory over the Indians.

The tandem of senior quarterback Nicholas Garcia and senior wide receiver Carson Cardenaz tied it at 7-7 with 6:30 left in the opening quarter when Garcia put together a 73-yard, seven-play march that culminated in a five-yard toss.

“We play everyone better every week throughout the season and everyone gets better,” said Garcia, who passed for 272 yards and connected on 23 of 35 attempts with one interception of the first four teams the Indians have faced. “When we get Glendale, we’re going to get all their sophomores. Once we get CV [Crescenta Valley], everything’s going to get real quick.”

A 17-yard strike to Cardenaz from Garcia made it 13-7 with 3:55 remaining in the initial period that capped a 53-yard, eight-play trek.

In short order the Indians’ advantage became 19-7 when Garcia drilled his favorite target, Cardenez (163 yards on 12  receptions) with a 24-yard pass as 7:57 was left in the second quarter, concluding a 43-yard, three-play drive.

With 5:47 showing before halftime, Burroughs (4-0) used a 34-yard, four-play drive and bolted ahead 25-7 after Garcia hit senior wide receiver Aiden Forrester (59 yards on six catches with an eight-yard toss.

“I just want to push my team forward. I want to get them as far as they can go,” said sophomore wide receiver John Alajijian, who snared three receptions for 45 yards. “Where ever the coaches need me. I can play all four receiver spots. I’m like a utility guy.”

After taking a 7-0 lead on the game’s first series when junior quarterback Evan Roderick (13 of 27 for 212 yards with one pick) drilled junior tight end Jack Weisskopf with a three-yard pass and 11:14 left, the Wolverines (1-3) shaved the advantage to 25-14 when Roderick hit sophomore wide receiver Jason Thompson (81 yards on six receptions) with an eight-yard toss and 1:53 left before the break.

Harvard-Westlake’s first scoring drive began at its 48-yard line and consumed three plays, while the second touchdown was a 10-play, 59-yard march.

A 65-yard pass play from Roderick to senior wide receiver Brendan Kang (87 yards on four catches) trimmed the Burroughs’ lead to 25-21 with no time left in the third quarter and took two plays.

At this juncture and only 12 minutes left in the game, the Indians (501 total net yards) knew they were in for a battle and responded by scoring two touchdowns in the final quarter.

With the ball resting at the Burroughs 35-yard line, Garcia methodically moved the team down field.

The key gain was Garcia’s 24-yard scamper that placed the football at the Harvard-Westlake 24-yard line.

The Indians’ lead was extended to 38-21 when sophomore running back Jon English (110 yards on 24 carries) waltzed into the end zone on a nine-yard carry and 3:31 left, which ended any hope Harvard-Westlake (355 total yards) would rally.

Burroughs will begin its Pacific League schedule next Friday night at 7 p.m. with a game against Glendale at Moyse Field.