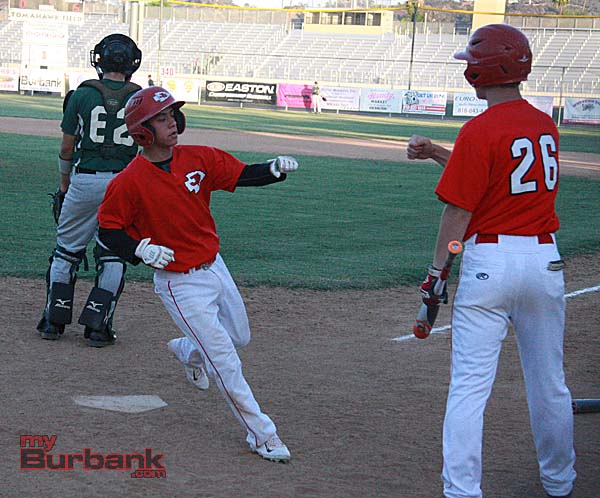 A large part of Burroughs’ success this past spring was the sturdy pitching by All-CIF pitchers Thomas Wilson and Danny Bustos. They were simply the best duo in the surrounding area.

With the summer VIBL season winding down, two pitchers have emerged for the Indians with several strong performances. But none like Friday night’s VIBL playoff opener against Granada Hills.

Senior Kyle Nicol absolutely dominated the Highlanders in a complete game effort as Burroughs advanced to the quarterfinals with a 6-0 victory. The Indians (14-7) will play at No. 4 Saugus on Monday at 5 p.m.

“I was happy with their demeanor and attitude. We came out real strong,” Burroughs coach Craig Sherwood said. “We got comfortable once we got going but with Kyle Nicol dealing on the mound he was lights out.”

The right handed submariner baffled Granada Hills (4-11) from the outset as he threw a three-hitter, allowing only one walk while striking out 13 batters.

“I was feeling really good out there. From the first pitch I had a lot of energy so I knew I was going to last the whole game,” Nicol said. “Everything was working today. Both sliders and my fastball. I was able to locate everything especially inside. That was definitely my best performance on varsity.”

Nicol, who improved to 4-0 and lowered his earned run average to 1.08, was a spot reliever during the Indians league championship run. Now he is taking full advantage of his opportunity to impress the coaching staff with his desire to be the team’s ace.

Nicol’s mixture of two different sliders, changeup and fastball had the Granada Hills players’ heads spinning and bats whiffing. He struck out two batters in five different innings and ended the game throwing 90 pitches including 63 for strikes.

“Kyle was focused,” Sherwood said. “He knew what he wanted to do from the very start. He had the eye of the tiger the whole game. Every pitch he threw was fantastic. He was on.”

Nicol and senior Jesse Galindo (2-1) have had an excellent summer thus far. Galindo leads the team with a miniscule 0.33 era. Both are parlaying their junior seasons into productive summer auditions for their senior campaigns.

Burroughs, seeded No. 5 in the playoff field, jumped out to a quick 5-0 lead after the first inning and coasted the rest of the way. Junior Alec Saavedra broke the game open with a bases-clearing double to left center giving JBHS a 4-0 lead. Randy Catlett followed with a double to right center scoring Saavedra.

“I’ve been swinging at high pitches so I knew to stop and it was low so I just tried putting the bat on the ball and it worked,” Saavedra said. “It felt good when I got to second. I was happy everyone scored and I got those three RBIs.”

“This team comes out hot with the bats. Everybody is just swinging,” said Nicol. “Everybody has a good attitude. We are a good team right now.”

Tanner Whitlock and Justin Palafox added two hits apiece as the Indians won their 14th game of the summer. A year ago, Burroughs went 16-7 during the summer and used that as a springboard to a 24-5 season. Last year’s Tribe went 65-22 overall during their 11 month journey together.

This summer’s edition has seen young players such as Palafox and his brother Nathan, Sage Del Castillo, Matthew Rudas and Mitch Lefevre step up in their first varsity action while returners in Whitlock, Catlett, Omar Tejeda and Jason Whaley continue their stellar play for what is shaping up to be another promising season for the boys at Burroughs.