Armstorff achieved his service hours through the Boy Scouts of America with his Eagle Scout service project, the removal of over 5,000 invasive plants from the San Gabriel Riverbed, in addition to service projects with other Boy Scouts and Meals On Wheels. He also worked on service hours through The Actor’s Fund Looking Ahead’s Operation Gratitude, Project Angel Food, the Los Angeles Food Bank and Big Sunday.

As a member of the JBHS swim and water polo teams, Armstorff fulfilled physical fitness goals. He was also a member of the Media City Ballet Company and the Pacific Ballet Dance Theatre under the tutelage of Artistic Director Natasha Middleton. The physical fitness part of the award aims to improve the participant’s quality of life through participation in fitness activities. The Congressional Award challenged Armstorff to set and achieve measurable goals in a physical activity. 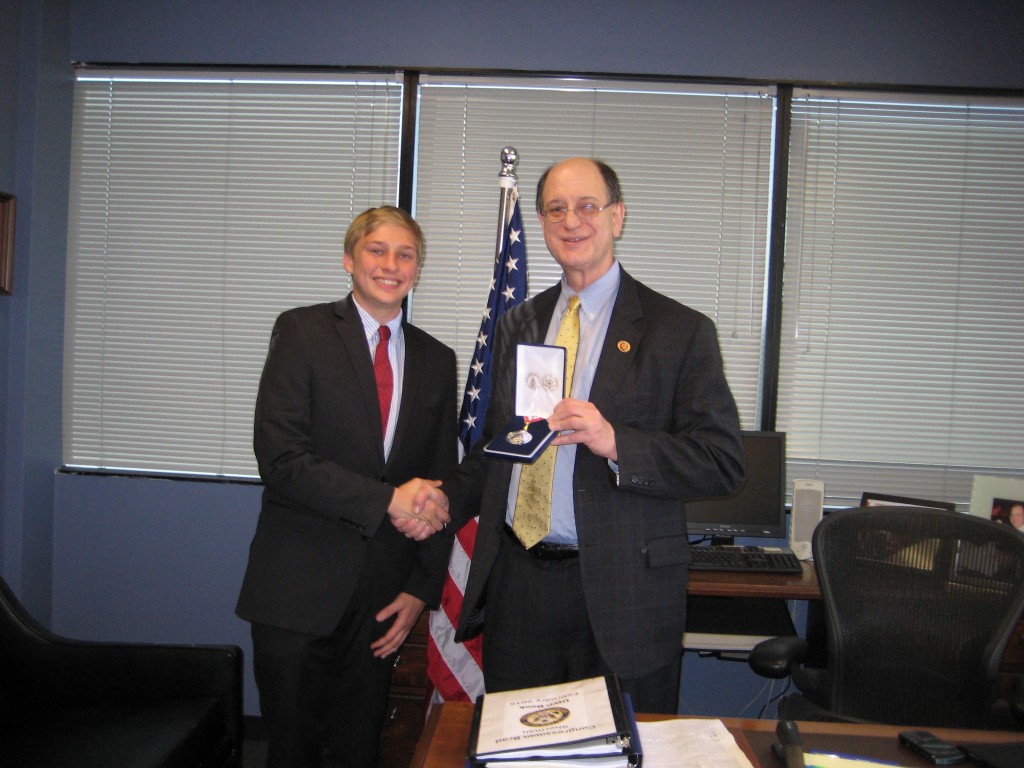 For personal development, Armstorff participated in the Looking Ahead Leadership Council and Boy Scouts of America. He also worked as a swim instructor in the summer at Lucille Cowle Swim School. The personal development part of the award expands the participant’s horizons while developing individual interests, social and life skills. The Congressional Award challenged him to pursue a new interest and advance to another level in an ongoing interest.

Armstorff’s expedition was a 70-mile backpacking trip at the Philmont Scout Ranch in New Mexico with Boy Scout Troop 209. The expedition goal of the Congressional Award challenges the participant through an interaction with the wilderness and to take the participant out of his comfort zone.

As part of the award program, Armstorff attended the Washington Youth Summit on the Environment for a week in June 2013. He was invited to the summit because of his Eagle Scout service project.

“The Washington Youth Summit on the Environment was an amazing experience where I learned about the dangers facing the environment and more importantly what I could personally do to help the situation,” explained Armstorff. “It was also an excellent opportunity to meet like-minded individuals around the same age with whom it was very easy to develop strong friendships.”

“I did interesting things in Washington D.C. during the course of the youth summit in 2013,” he added. “We visited all the national monuments, toured Capitol Hill, went to National Geographic Society Headquarters, The Smithsonian and the National Zoo.  We listened to lectures by experts in their field and saw films dealing with various areas of conservation.”

While Armstorff isn’t yet sure of his intended college major, he says his main interests lie in politics, math, science and the environment. As a youngster, Armstorff appeared in films, but he hasn’t been doing much acting in recent years while he has focused on school and other interests.

“Griffin is a really exceptional young man and he is very humble, too,” commented The Actor’s Fund Education Counselor Laura Campbell, who has known Armstorff for nine years, through the Fund’s Looking Ahead program for young actors.

“He literally is always one of the first to say ‘what can I do to help,'” she continued. “He goes above and beyond. He is genuine and thoughtful. I am just really proud of him and all he’s accomplished already.”

“I pursued this challenge because I was already completing most of the requirements and the only thing that was left was to record everything,” said Armstorff. “For instance, helping people through service is something I love to do, so completing two hundred hours of community service was not hard.”

“One of the reasons I want to go to Princeton University is because of their mission: ‘Princeton in the nation’s service and in the service of all nations.'”

“Completing this goal has been a confirmation that I am working to be a better person and that I can be successful in whatever I’m trying to do by being myself,” he said of receiving the Congressional Award Silver Medal.

Throughout the year, Congressional Award medalists are honored at local ceremonies and medal presentations by Members of Congress at the district and state levels, as well as at a national ceremony held each June in Washington, D.C. Since its inception in 1979, the Congressional Award has recognized thousands of young Americans committed to serving their country and improving themselves, representing over 3.5 million hours of public service.