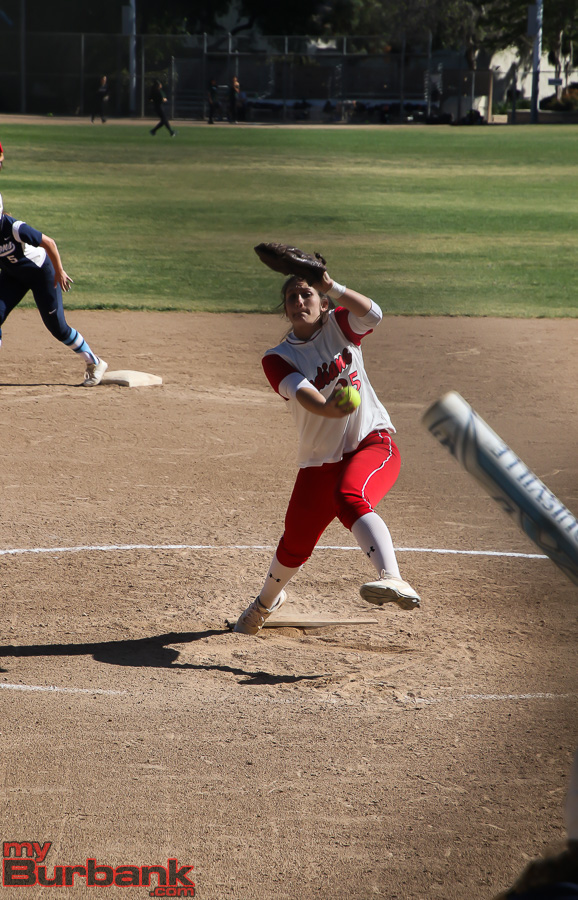 Up to this point, the two best softball teams in the Pacific League are Burroughs High and Crescenta Valley.

On Tuesday at Olive Park, the two met and with perhaps the memory of an earlier setback to the Falcons in mind, the Indians were determined to even the score.

One difference from that initial meeting that saw Burroughs lose 9-0, was senior Presley Miraglia wasn’t in the circle.

This time Miraglia was and it mattered as the Indians edged the Falcons 2-1 and snapped their 15-game winning streak as the right-handed ace limited Crescenta Valley to six hits and one run with five strikeouts and one walk across seven innings.

The Indians and Falcons are in a flat-footed tie for the league lead and have five games remaining.

The Falcons led 1-0 on freshman Dee Dee Hernandez’s leadoff homer that found the gap in right center in the fourth inning.

In the bottom of the fourth, the Indians (9-3-1 and 8-1 in league) responded with a two-run frame as junior Mia Storer laced a one-out single to right field.

The next batter was sophomore Chloe Bookmyer, who then ripped a hard-hit single to left field off Hernandez that went through freshman Morgan Eng’s legs for a three-base error as Storer and Bookmyer both raced home for a 2-1 lead.

“Considering what she pitched me the first game. She pitched me high inside so I was kind of expecting that inside pitch,” Bookmyer said of her key at-bat. “Inside is not usually my happiest pitch to get, but I buckled down. I turned on it and it ended up being a really good hit.”

“They’ve got good hitters in there. So I never counted them out,” he said. “I had in the back of my mind, what if they get a hit? It was going to come down to who made the most errors.”

Tanigawa said the defense, which wasn’t perfect and committed one miscue, was a factor in the win.

Hernandez then nicked Miraglia, but senior Jessica Amaya grounded out and junior Megan Williams lined out to second base.

In the fifth, the Falcons (19-2 and 8-1 in league) had a runner at second base with two out in the form of junior Alyssa Hernandez, who singled to center and later swiped second base.

Miraglia walked sophomore Natalie Bitetti, but induced Dee Dee Hernandez to ground out to third baseman, sophomore Memorie Munoz, who made a terrific stop and gunned the ball over to first baseman Bookmyer.

The sixth inning opened with sophomore Maddie De Leon grounding out to Munoz, who made another spectacular play.

Junior Peyton Hause flied out and junior Kristy Taix reached base on an error. Miraglia then struck out freshman Stephanie Wichman swinging.

The dramatic seventh inning began with freshman Devon Medina grounding out to Bookmyer.

Eng then stuck out swinging, but Alyssa Hernandez tripled to left field and stood at third base as the tying run.

Up stepped Bitetti, who hit a fairly-hard liner that looked like it was destined for left field, but Munoz leaped as high as she could and snared the ball which secured the victory.

“I know I couldn’t let it fall. The game would have been tied,” Munoz said of the game’s final out. “Who knows what would have happened?”

Miraglia gave up a leadoff infield single to Alyssa Hernandez in the first. Bitetti’s sacrifice bunt moved her to second base, but Dee Dee Hernandez popped up to Munoz and fanned De Leon looking.

Hause opened the second inning with an infield single. Taix sacrificed her to second base, however, Wichman flied out and Medina grounded out.

Miraglia worked a perfect third as she fanned Eng swinging, while Alyssa Hernandez flied out and Bitetti popped up.

“They made the key plays and we didn’t,” Crescenta Valley coach Amanda Peek said. “We played hard. We didn’t have the timely hit and the key plays. The game was won on an error.”

Senior Hannah Talavera had an infield single in the first inning and Miraglia singled to right field in the sixth for the other Indians’ hits.