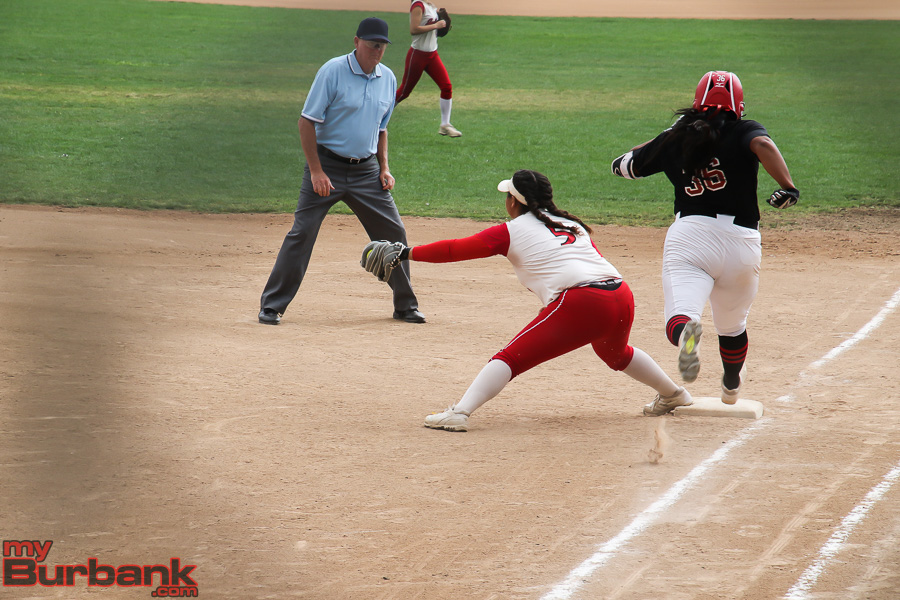 On three occasions, the Burroughs High softball team collected two hits in an inning against Redlands East Valley, but failed to score each time.

In part, this was its undoing as the Wildcats tamed the Indians 4-0 in a CIF Southern Section Division III second-round playoff game at Olive Park on Tuesday.

Burroughs was outhit 10-8 by Redlands East Valley, who often looked to hit the first pitch from senior pitcher Presley Miraglia, but timely hits by the Indians would have likely scored runs.

“We missed some key plays,” Burroughs coach Wes Tanigawa said. “We missed bunts we couldn’t get down. If you make mistakes, you’ll get cancelled out. Our key hitters couldn’t get key hits and that put us in a bind.”

In the third inning, after junior Megan Williams struck out, sophomore Memorie Munoz singled to center field and junior Kaitlin Escamilla was safe on a force out.

Senior Hannah Talavera, who will attend Channel Islands College and perhaps play softball, blooped a base hit to right field, but sophomore Chloe Bookmyer grounded out to third base.

“I had an amazing career. It was an amazing journey. Sophomore year was my favorite,” Talavera said. “I love my teammates. We’ve always had a great time. This is a good team to end it with.”

Talavera then looked at the game. “It was a total team loss. All of us couldn’t produce as a team,” she noted. “There were hits made. There were catches not made. As a team, we were off.”

The Indians (14-5-1) once again had two runners on base via hits in the fourth inning. Miraglia led off by grounding out to shortstop, but junior Mia Storer, who is fast on her feet, was safe on an infield single.

On the play, the shortstop’s throw slipped slightly past the first baseman, and Storer made a move to run to second base and was subsequently tagged out.

Senior Jessica Amaya rifled a hit to left field, but senior Nikki Ricciardella, who will study at the University of Arizona, grounded out to shortstop.

In the sixth inning, after Talavera grounded out to shortstop, Bookmyer singled to right field, but was erased when Miraglia, who will play at Cal State Long Beach on a softball scholarship, bounced into a force out.

Junior Hannah Skinner came in as a pinch runner and moved to third base on junior Sierra Harvey’s single to right center.

Amaya, who will attend either Cal State Long Beach and not play softball or Mission College, where she will play, struck out to end the threat.

In the seventh, sophomore Isabella Kam opened up the frame with an infield single for the Indians, but was erased after being caught in a run down.

Senior Eva Harvey, who went the distance for the Wildcats while striking out nine, fanned sophomore pinch hitter Sami Fiorella and junior pinch hitter, senior Kaylee Vigil, who will attend Northern Arizona, to end the game.

The Wildcats struck in the first frame against Miraglia, who ended her highly decorated four-year pitching career.

“That’s one of our things that we started from the time we got going,” Redlands East Valley coach Debbie Garcia said. “Aggressive and attack. When you attack, you select the pitches.”

In the fifth, Redlands East Valley (22-7) sent seven batters to the plate that included a run-scoring triple to left field by McKee that plated junior Autumn Bennett (three hits), who was safe on a one-out single to right.

Redlands East Valley’s advantage swelled to 3-0 in the same stanza on a run-tallying hit by Harvey as McKee scored.

The Wildcats tacked on an insurance run in the seventh as Miraglia yielded three hits including a run-producing single to left field by senior Shelby Arbeiter as Bennett, who led off with a single up the middle, scored to make it 4-0.

Miraglia, who retired the side in order only once, in the sixth inning, escaped trouble in the second when sophomore Amaya White led off and reached on an error.

“I see a lot of improvement. I’m not dissatisfied. I look back and I’m thankful,” said Miraglia, who struck out five with one hit batter over seven innings.

Miraglia then added: “This game, we had a lot more errors than normal. I think I probably could have pitched off the plate a little more, but I was trying to get the out and it worked a majority of the time,” she pointed out.

White then stole second and third base as the Wildcats finished with four stolen bases, but was stranded when Miraglia induced freshman MacKenzie San Pedro to pop up and then struck out junior Samantha Carson and senior Julia Salomon.

In the third inning, Bennett led off with a single to left field and McKee’s sacrifice bunt moved Bennett to second base. Arbeiter popped up to Miraglia and Harvey grounded out to close the threat.

Junior Madison Ferro (two hits) doubled down the left-field line to start the fourth inning, but White bounced back to Miraglia, while San Pedro struck out swinging and Carson flied out to right.