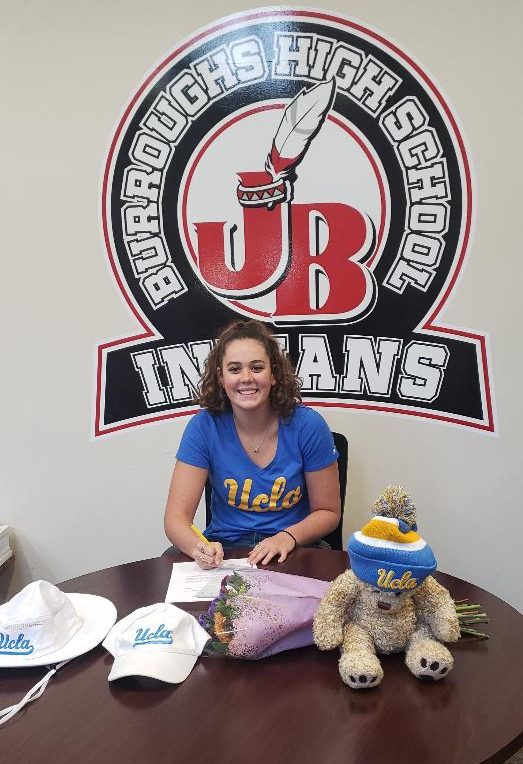 Burroughs High has been blessed to have had a number of fine athletes over the years who have gone on to major universities.

Swimmer Maya Wilson and girls’ volleyball player Lydia Grote can add their names to that list.

Both recently signed national letters of intent with two of the finest universities in the nation that combine both excellence in academics and athletics.

Wilson, who holds the school record in every individual event, will attend UCLA.

Grote will continue her education and career at UC Berkeley.

“There were a lot of smaller schools and a lot of emails. I would get like 50 a day almost whether it was academic or athletic scholarships,” said Wilson, who said she has better than a 4.0 grade point average.

Wilson said she chose UCLA over Princeton, University of Pennsylvania, Rice, UC Santa Barbara and UC Davis, among others.

“UCLA has been my dream school. I’ve always loved it. It fits all of the things I wanted in a school,” Wilson said. “I don’t like the cold, so that kind of took out a lot of those schools.”

Since Wilson has been very versatile in swimming a number of events, she said her role with the Bruins will most likely be in the middle distance events.

Grote signed her letter of intent with UC Berkeley, where she will be joined by friend Kendall Jensen of Village Christian, who also lives in Burbank.

The outside hitter has played a key role in Burroughs winning three consecutive Pacific League titles.

She joins her sister, Marin, a 2018 Burroughs graduate, in the Pacific 12 Conference. Marin Grote plays for the University of Washington.

Emanuella Nathan, a star on the Burroughs girls’ water polo team, has signed a letter of intent with the University of the Pacific in Stockton.