In the end, injuries to four starters were part of the Indians’ undoing Friday before a near-full house, falling 21-7, to the Golden Knights, who registered seven sacks on quarterback Steven Hubbell, who was harassed and hurried during much of the game.

“Both defenses played well,” Burroughs coach Keith Knoop said. “Those guys [St. Francis] are big and they can play. But we accomplished a lot and we have a lot to be proud of. I’m going to enjoy all the great things this team accomplished. This is a special group.”

Hubbell came in having tossed 27 touchdowns and four interceptions, but the Golden Knights, who will face top-seeded La Serna in the semifinals next week, held the senior to 128 yards on 21 of 34 with two interceptions. 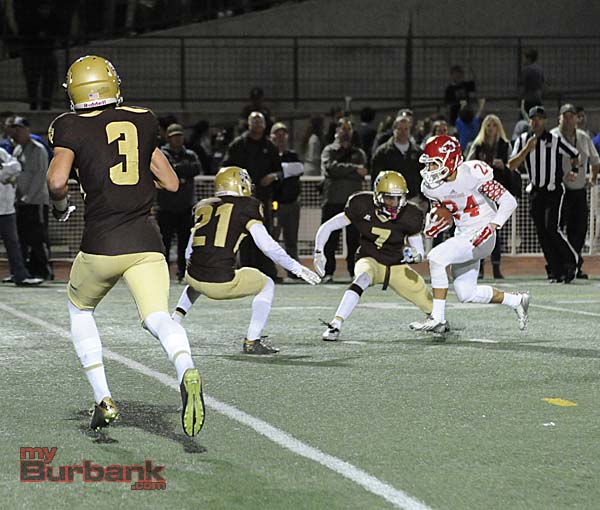 The No. 4 seeded Indians were riding a 10-game winning streak and a perfect 7-0 mark in the Pacific League, but managed one touchdown when senior running back Ash Hawkins scored on a one-yard run with 6:54 left in the fourth quarter that cut the Golden Knights’ lead to 14-7.

Burroughs tried an onside kick which St. Francis recovered at midfield, and cashed it into a 65-yard touchdown pass from junior quarterback Miles Bryant (11 of 17 for 174 yards with two picks and was sacked four times) to senior wide receiver Jasher Foster (92 yards on three catches) on second and 25 with 5:30 left that made it a two-score lead.

The Indians (10-2), who mustered 157 total net yards, including 29 yards on the ground, had two more possessions, but each resulted in a punt. 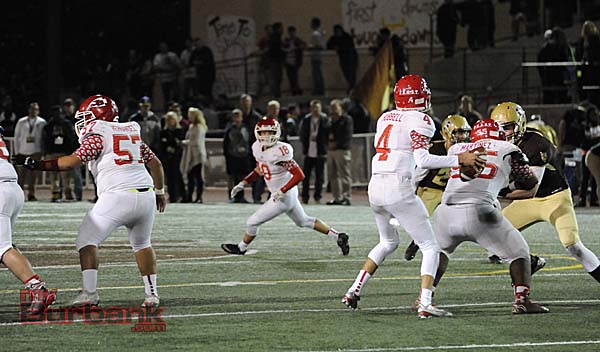 Junior tailback Chance Bell, who was the leading rusher the last two seasons, didn’t suit up after suffering a knee injury in the opening-round victory over Norwalk, nor did junior center Tommy Howe, who broke his leg in the same game. The Indians were also without senior defensive lineman Cole Gurley and senior linebacker Josue Chicas Ortiz.

“If we had those players we’re a more dynamic group and we can do more,” Knoop said. “It might have been a different outcome.” 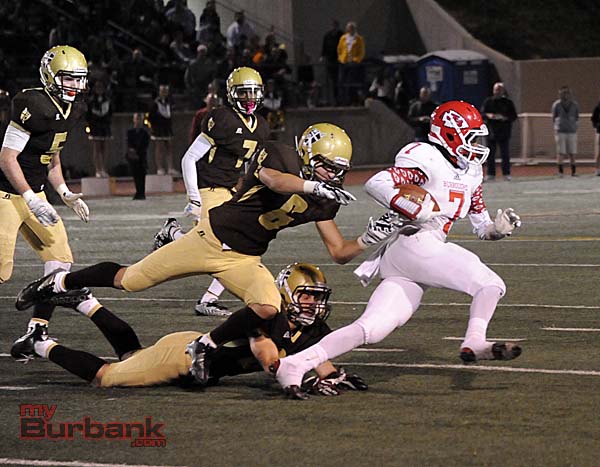 Senior wide receiver/defensive back Robert Awunganyi tries to use his speed against the Golden Knights. (Photo By Ivan Galan)

It was a defensive struggle as each team had trouble moving the football down the field, but the Golden Knights (245 total yards) scored on their second series as Bryant marched his team 42 yards on seven plays that was capped when senior running back Areg Nazarian (35 yards on 14 carries and 19 yards on four catches) had a 10-yard burst and 2:21 remaining in the first quarter for a 7-0 lead.

The half ended with St. Francis compiling 100 yards on offense and a 7-0 lead, which made it imperative that the Indians come out strong in the second half.

It worked out that way as the Golden Knights turned the ball over when junior wide receiver Daniel Scott (32 yards on two receptions) gained 25 yards on a reception, but then fumbled which senior defensive back Jarret Wrobel recovered at the Burroughs 36-yard line. 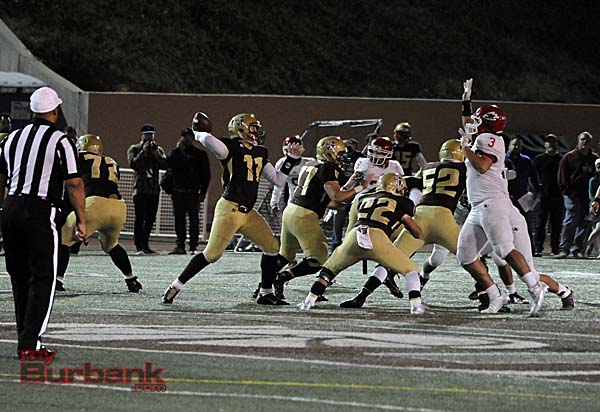 St. Francis quarterback Miles Bryant passed for two touchdowns in a 21-7 win over the Indians. (Photo By Ivan Galan)

“With all those guys missing, we had a different mental state,” said Hernandez, who had four catches for 21 yards. “We were playing more to survive. I think we ran out of gas. Stuff happens.”

Hernandez, who hopes to play college football, was pleased with the overall effort. “The defense played really well,” he said. “I think if we had those guys our offense would have been able to do more.” 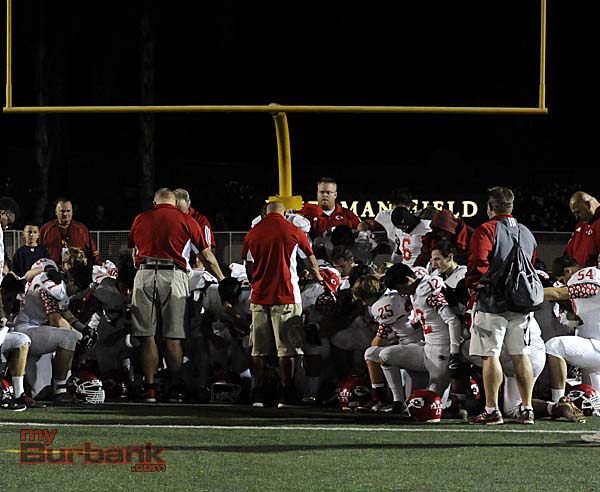 Senior wide receiver Nick Mercado, who led the way with 38 yards on four receptions, thought the Indians were going to pull off the upset.

“It definitely didn’t go the way we wanted it to,” he said. “It’s a different game if those guys are in the game. I’m not saying that we would have won, but it would have made a difference, and we would have been able to move the ball easier.”

St. Francis (9-3) then moved ahead 14-0 with 12.9 seconds left in the third quarter when Bryant found senior tight end/defensive lineman Sean Davitt (six sacks) alone in the end zone with a 16-yard offering.

On Burroughs’ next possession, Hubbell (12 carries for minus four yards) orchestrated an 86-yard march that Hawkins (two yards on two carries) climaxed with a short run, but that would be the only offensive highlight.

Senior wide receiver/defensive back Robert Awunganyi (13 yards on five receptions), who also wants to play college football and had an interception, felt the game could have gone in Burroughs’ direction.

“I was pretty disappointed,” he said. “Those players played hard. We made a couple of mistakes. It was pretty tough to take.”

Senior wide receiver/defensive back Hunter Guerin (17 yards on one catch) had a pick and accounted for 26 yards on seven carries to lead the Indians, who had 17 yards on the ground in the opening half.