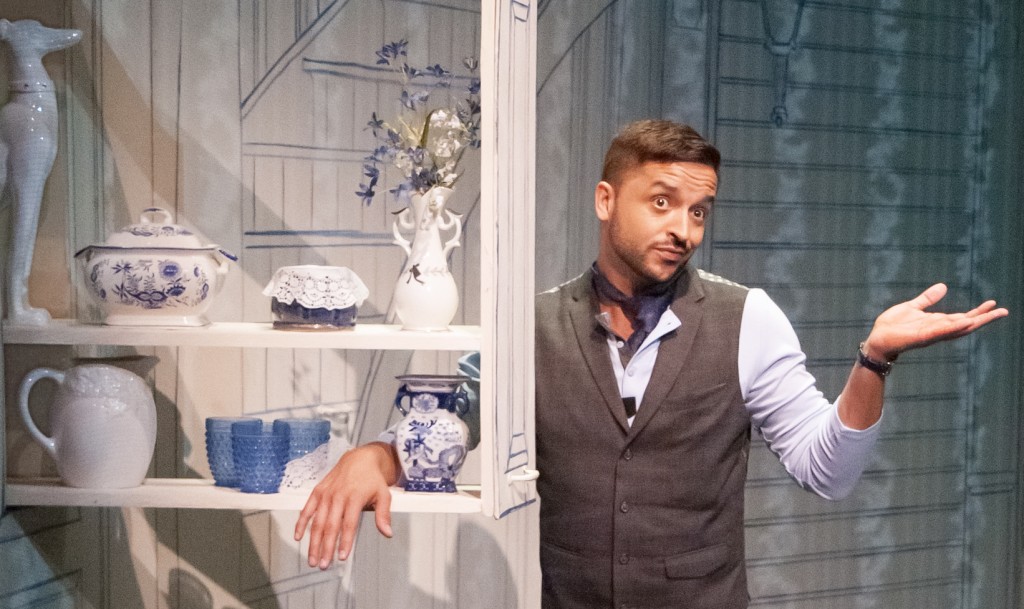 Did you know that Barbra Steisand has a mall of her own collectibles in the cellar of her barnhouse on her Malibu estate? I didn’t know that either until I saw Buyer & Cellar at the Falcon Theatre. Playwright Jonathan Tolins imagined what goes on in that mall and he created an enjoyable, refreshing one-man play about it.

Jai Rodriguez plays Alex More, a recently unemployed actor who desperately needs a new job. Then one day, his life will change when his former employer calls him up and tells him about a job in Malibu.

More has no idea what he is for when he drives up to an estate in Malibu. A woman greets him and tells him about the job. She explains that it will consist of him working in a mall that only the woman of the house visits. He agrees to take the job especially when he finds out the woman of the house is Barbra Streisand. Who wouldn’t take that offer?

Jai Rodriguez in Buyer & Cellar
Photo by Sasha A. Venola

After his interview, he runs home to tell his boyfriend, a wannabe screenwriter who is obsessed with TCM movies, about his job and who is employer is. His boyfriend is a Jewish Man from Brooklyn, so of course he is thrilled for Alex.

And Alex is thrilled for his first day of work. He starts cleaning the antiques in the antique shop, looking at her infamous costumes in the dress shop and checking out her dolls in the doll shop. It is fun at first, but then after several days of being alone down there, he is bored.

Then he hears a bell and that means Barbra is finally checking out her mall. She walks around and asks him about a doll. He creates this crazy story about the doll and she agrees to buy it. He agrees to sell it to her for a higher price than she is willing to pay. The two negotiate and he doesn’t come down to a price she wants, so she walks out him.

He is not sure what just happened. Days go by and still no Barbra. Then she shows up again to buy the doll, but he won’t back down on his price. The two have some fun, but she once again leaves him with no doll, just a story of why dolls are so special to her.

Once again, after some time, the bell rings again. Babs comes down and this time she has come up with a way to get her doll. A way that Alex will have no choice but to give it to her at the price she wants. 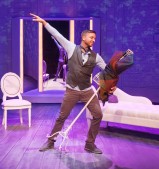 Jai Rodriguez in Buyer & Cellar
Photo by Sasha A. Venola

Now that she has her doll, she also has a new friend in Alex. The two spends many hours together in the mall and only the mall. His boyfriend questions their friendship. He uses examples from her movies to prove his points. Examples that will change the way you watch some of her greatest works in a good way.

Eventually it become too much for Alex and he breakups with his boyfriend. The next day he shows up to work and Babs comes to see him. Will she see his pain or is their friendship as fake as her mall?

You will just have to go see this fast movie one-act play that is full of laughs from the beginning until the end of the production.

Many people only know Jai Rodriguez from Queer Eye for the Straight Guy, but I also know him from the short-lived ABC comedy Malibu Country. I remember thinking he was a great actor on the sitcom, but he completely blew me away with his performance in this one. Not only does he play Alex More, but he also acts out the other characters that are featured in his story. He keeps you so entertained that the minutes fly by. Before you know it, it is over and you are left wanting more because it is that captivating.

If you are looking for something really special to do between now and November 6th, I highly recommend going to see Buyer & Cellar. Reasonably priced tickets are available at Falcon Theatre’s site or call the Box Office at (818) 955-8101.

Burbank Honors Those Who Died in Service to America
Tangkhpanya Announces Run for Burbank School Board
Get Out Of Town!: L.A. Zoo Lights
Iconic Figure Harvey Milk Is Subject Of Burbank Library Presentation