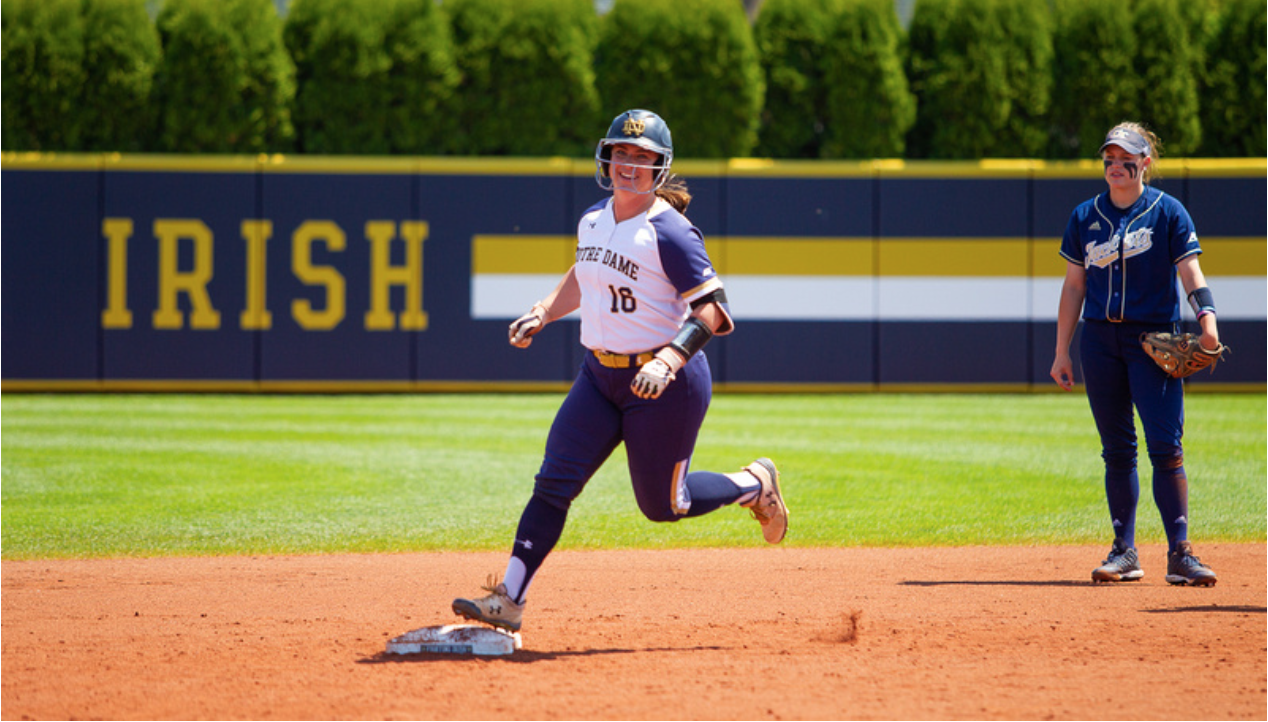 There are certain qualities or assets that one needs in order to be successful in life and in sports.

In the case of athletics, physical and mental gifts are essential and they go a long way. But even if one possesses these attributes, it’s also helpful, and perhaps necessary, to put in the time and hard work in order to get better.

For Caitlyn Brooks, who played four seasons on the University of Notre Dame women’s softball team and before that was a highly-decorated standout on the Burbank High softball squad, had all three in her tool box, but like the very best, always wanted to improve.

“Caitlyn put in a lot of hard work other than just normal practices,” said Mike Delaney, who was the Bulldogs softball coach who oversaw Brooks during her tenure at Burbank which began in 2012 and ended in 2015. “Extra hitting lessons and pitching lessons weekly.”

Delaney, who recently stepped down from that post, added: “She had a great work ethic and was always quick to praise her teammates,” he said. “She loved the individual matchups. Pitcher versus pitcher. Pitcher versus batter. Caitlyn understood her swing and pitching motion extremely well.”

There is a small percentage of people talented enough to play sports for the Fighting Irish. What was that experience like?

“Being at Notre Dame exceeded my expectations for sure,” said Brooks, who capped off her college career by being named the Atlantic Coast Conference Player of the Year in 2019 after breaking the school’s single-season home run record with 20 and leading the team in five offensive categories. “It is such a magical place and I really started to understand and experience that throughout my four years.”

Getting selected ACC Player of the Year had to be an unexpected surprise for Brooks.

“Being named ACC Player of the Year was a total shock to me,” said Brooks, who was also named to the ACC All-Academic team. “I never look at stats and this year I knew I was doing well, but that wasn’t anything I thought that I would achieve. Earning that title was really cool and I remember calling my parents [Shari and Roger] and we all were so excited and cheering. It was also really cool to see all of my teammates excel too and also support me. They are what made it special because this team was so amazing and special.”

How difficult was college compared to high school, both scholastically and athletically? “The hardest part of transitioning was the academics,” said Brooks, who received a bachelor of arts degree in film/cinema and video studies and will work in social media marketing. “For me that was the hardest part of Notre Dame. Softball was the most consistent and smoothest transition.”

What was it like for Brooks, who carved out a staggering 80-17 record with 1,011 strikeouts as a high school hurler, to actually put on the spikes for Notre Dame?

“I was definitely nervous my first time putting on the Irish uniform, but I wanted to compete and that was really exhilarating,” she said. “Once I got my first hit, I felt completely comfortable.”

Brooks said she was at ease from the outset. “Our team is like a family and that starts from the moment you’re introduced when you’re a recruit,” she noted. “I always knew Notre Dame was for me because of the team culture which is cultivated by our amazing coaches. From the moment you first speak to them, you know that they are great coaches and even better people. I felt part of the Irish team as a recruit and from the moment I stepped on campus as a freshman.”

This feeling of security and care begins with Deanna Gumpf, the Notre Dame head coach.

“She is so inspiring and is like a second mom to us all,” said Brooks, who paced the Fighting Irish in homers with nine and runs batted in with 38 as a junior. “I love how direct and passionate she is. She truly wants to see us succeed on and off the field. Notre Dame develops us into great athletes and even better women and that starts at the top by always being an example of excellence and kindness. Coach Gumpf knows us better than we know ourselves sometimes and that is what makes her such an incredible coach and person. She is definitely a role model for me.”

Brooks was a threat in the batter’s box and in the pitcher’s circle at the high school and collegiate level. Which one was more appealing?

“For sure the batter’s box. Being in the box I can fully relax and be laser focused, but have no pressure,” Brooks said. “Or at least I tell myself that there is no pressure. I also know that the girl behind me is going to get it done and having that confidence and support takes all of the pressure off. I found my stride in the box and really loved softball and the game.”

Brooks ended her college career tied for second place all-time with 48 home runs. “Most of it was from this year,” said Brooks of her senior season. “I wasn’t trying to hit the ball out, but I was really focused on my timing, pitch selection and mechanics this season and I had a great result.”

Brooks, who clubbed 21 homers during her final three seasons as a Bulldog, then added: “When it came to pitching, I definitely put too much pressure on myself, but I loved competing. I think my role as a reliever and just come in and do my job on the mound took the pressure off and really let me focus on hitting during the game,” she said.

Brooks said her approach to hitting was vastly different from pitching.

“My main thoughts were to focus on my breath and my approach,” she said. “I watch a lot of film before a game on the pitcher and saw what they threw and adjusted my plan to the pitcher and my strength. Usually I was looking inside and attacking that pitch if it was a strike. In the circle, I would just focus on my routine and breath. I would visualize the pitch when I got my sign and go for it.”

Brooks, who batted .304 with eight homers and 39 RBIs as a sophomore, said even if the team struggled, which was rare, they were always unified.

Did one hit or game stand out for Brooks, who batted .335 with a .416 on-base percentage and 55 RBIs, the most-ever by a Notre Dame freshman?

“I think the game that I broke the single-season home run record was huge,” said Brooks, who bashed a team-high 11 homers with a team-best .639 slugging percentage as a freshman. “It was against Pittsburgh, and when I broke the record it was my first collegiate grand slam which was super cool. It also could be the farthest ball that I’ve ever hit.”

Brooks continued: “After that game they gave my mom the ball and having her and my dad there to see it was awesome,” he pointed out. “My team was so pumped for me and seeing them at home plate going crazy is something that I will never forget.”

Did Brooks have targets she wanted to reach? “I set goals with myself and our coaches,” she said. “My plan had more to do with my approaches and learning from the previous year. For pitching, it was understanding my role and really capitalizing when I was called upon. Being that consistent force to get us out of a jam and always be ready. For hitting, my approach was about attacking the first two strikes. Once I started doing that I noticed a massive difference in my swing.”

Because of their lofty status, youngsters often look up to athletes. There may be local girls who admire Brooks, who posted an 18-5 mark, with a 0.66 earned-run average, 264 strikeouts, 18 walks in 149 and one-third innings as a high school senior, and would like to emulate her. Does Brooks have any advice?

“I would say that you should get the best grades that you can because grades get you into any school you want and you can always try out,” she said. “I would also say to go to camps and get on the best travel team that you can. If you get great grades and compete at the highest level, with the best competition, then you are marketing yourself in the best way that you can.”

Delaney thinks that Brooks is an inspiration to young girls who want to play softball, even if they don’t play for Notre Dame.

“Caitlyn is a great example for younger athletes in Burbank,” he said. “She was a great student and a great athlete.”

Looking back and reflecting on her college career at Notre Dame, Brooks is extremely thankful for the opportunity and wouldn’t do anything differently.

“So far there isn’t anything I regret during my four years,” she said. “I did more than I expected to academically and athletically.”