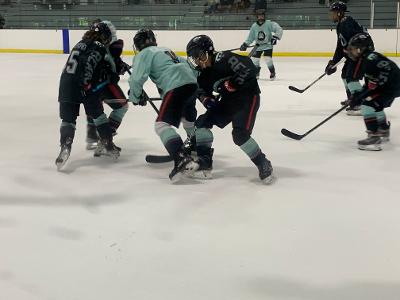 It isn’t easy trying to develop young hockey players in a place where the sun shines far more days than it does not.
But the California Golden Bears club, which has been based out of Pickwick Ice Center since 1964 are still producing quality players, many of which move on to academies in other parts of the country where there is more high quality competition.
“We have an alumni list of 60 players in the last five years of moving on from the Bears organization to prep school or hockey academies. The purpose behind that is saving money and adding education,” said Justin Blaszak, the Golden Bears’ director of player development.  “At the AAA level some of these kids are missing 30 days of school because they have to play teams out east where there is more competition. The amount of money that they are spending at the AAA level is maybe equal to a prep school, so you are getting your education and a quality hockey program opportunity. Annually we host a prep camp. I think we had 25 schools and academies to come to Pickwick to start recruiting players for the next year.”

The Bears have just two of their 15 teams that compete at the AAA level. Blaszak said bids have been put in to increase that total.

“Being ranked 48th in the country, we expected to get a little leeway, but instead of it being based off of metrics and development, they base it off of membership,” said Blaszak in reference to the organization’s ranking by Myhockeyrankings.com.
The 15-and-under team, which consists of players born in 2007 as well as the 13-and-under team, which consists of players born in 2009, are the Bears’ AAA teams.
The 2007 team is coming off a year in which it reached the final 16 at the national level.
While Blaszak said the club hopes to add more AAA teams including a 16-and-under team next year, he realizes many players will also be leaving for greener pastures.

“Inside the organization we have two (National Hockey League Players Association) certified agents. There’s only 202 of them in the world,” Blaszak said. “They have a network that comes with that. If we’re looking to move a player on, we’re looking to put them in a place to be successful both athletically as well as academically.  We’re providing that information for the families so they can make educated decisions on what’s best for their child. Having a 15U and a 16U we’re not forcing them out either.”

Blaszak said the club has introduced a no-cost ball hockey program that is intended to help grow the popularity of the sport in California, where Blaszak said the participation numbers are dwarfed by football, baseball and soccer.
He said costs affiliated with hockey are one of the reasons why many haven’t played the sport.
“All you need are you shoes, a helmet and a stick,” Blaszak said. “You can come try it.
For more information on the California Golden Bears, visit www.cgbhockey.com.