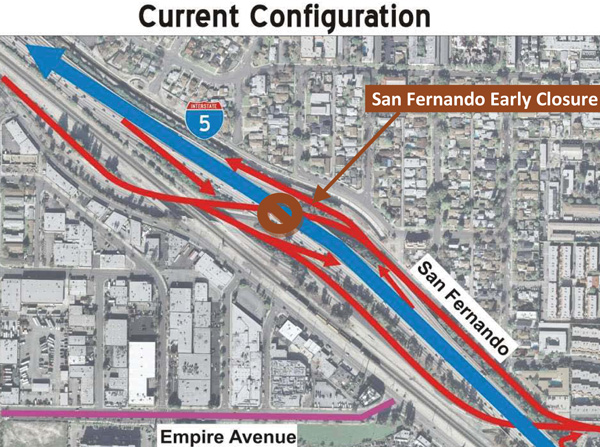 Get ready Burbank hill people, your lives are about to change for the next few years.

On Tuesday night, the Burbank City Council will consider a request from CalTrans to close the San Fernando underpass at the I-5 Freeway around April of this coming year so that they can get an early start on the widening project scheduled to start in 2013.

One aspect of the project is to raise the railroad crossing OVER Buena Vista with a gradual grade on both sides of the street.  Because of this, some major utility and oil pipelines will have to be relocated which CalTrans wants to get a jump on before the project begins.

Staff is recommending this closure to the Council, which will leave hill residents only Buena Vista and Burbank Blvd. as access points to cross over the freeway.  In 2013 when the CalTrans project moves into Burbank, the Burbank Blvd. bridge will also be shut down for approximately one year as it is rebuilt.

As businesses on Pass Ave. found out a couple years ago when the Pass Ave. bridge was closed, their business went down 25 to 50%.  Once the Burbank Bridge closes in a couple of years, look for a major impact to effect the businesses on both sides of the freeway.

One thing is certain, once construction begins, hillside residents and valley residents will spend a little more time in their cars if they would like to visit with each other.