The Bulldogs manage just one hit, a leadoff double by Dominik Severo in the sixth inning.

Burbank Will Again Be Well Represented in College Athletics

A look at the graduating seniors who will be playing college sports around the nation. 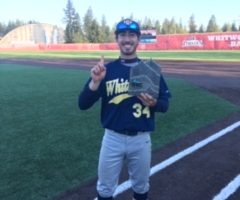 The Bulldogs score in four of the seven innings and tally three runs in the third and fourth.

The Bulldogs score a run in the eighth inning after trailing 2-0 in the top of the first.

Burroughs Baseball Comes From Behind, Wins 4-2 Over Crescenta Valley

The Indians scored solo runs in the fourth and fifth and added two more in the sixth as they rap three consecutive hits including Hyatt Entz's key double.

Burbank takes 4-0 lead in the first inning, but can't hold it. Offense is limited to seven hits with Dominik Severo getting two singles.

Brian Garcia's two-run double in the sixth inning was the key blow for the Indians.