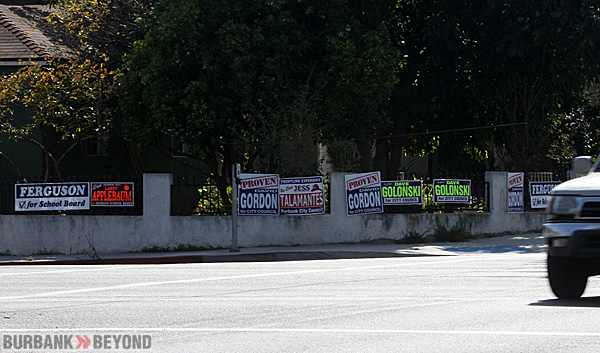 Scott Jamaal Trinidad, who has been described by Burbank School Board candidate Steve Ferguson as “a volunteer worker” in his campaign for a seat on the Burbank Board of Education, has been charged by the Burbank City Attorney’s Office with petty theft after an investigation by the Burbank Police Department into the taking of signs for rival school board candidate Char Tabet, on the night of February 11.

According to Sr. Assistant City Attorney Denny Wei, 30 year-old Trinidad is being charged with section 490.1(a) of the California Penal Code.  The section deals with petty theft where the value of the item stolen is less than $50.  Violation of this section is an infraction, according to Wei.  The maximum fine in this case would be $250.  Trinidad was not arrested, as some unreliable blogs have speculated, but ordered to appear in court.

Trinidad is accused to taking the signs from the front of an insurance company office in the 1200 block of W. Magnolia Blvd.  The incident was caught on the company’s surveillance video.  When the video was shown on BurbankNBeyond.com, several people identified the person taking the signs as Trinidad.  The video reportedly was used as evidence in the police investigation. (Click here to see video).

Ferguson has publicly apologized for the actions of one of his campaign worker, and sent two letters of apology to fellow candidate Tabet.

In a statement to this publication he said,  “I am disappointed that this issue continues to be the topic of conversation as our school district faces significant challenges that haven’t been given nearly the time or conversation that they deserve. As I have stated before, I have taken corrective actions within my campaign to ensure that this never happens again – it does not reflect who I am as a candidate or the mission of my campaign for the Board of Education,“ said Ferguson,

I will again apologize to Ms. Tabet, as I have twice before both in public and in private. I wish her well and I hope we can move past this to engage in a substantive conversation about our ideas for the district and our community.

Ferguson had previously denied any knowledge of Trinidad’s actions, and stated that his role in the campaign would be “greatly diminished,  and he would be continuously supervised.”  Tabet publicly questioned Trinidad’s role in the Ferguson campaign, noting that several community leaders had seen Trinidad with Ferguson “on numerous occasions at several City and campaign related events.”

In referring to her youthful opponent (Ferguson is 24 years old) Tabet said, “We certainly wouldn’t want someone sitting on the Board of Education what makes decisions regarding our children, people’s livelihoods, and millions of dollars in taxpayers’ money, who is not mature enough to run a campaign like an adult.”

Prior to the primary election in February, at least one homeowner in the hill area of Burbank captured video of two people taking signs for various candidates.  Other candidates, including Ferguson, have said their signs have been taken from lawns.  The City Clerk’s office noted that they had received a few calls about signs being stolen, and referred the callers to the police department. Police are currently looking into an incident this month possibly involving sign theft suspects with a large number of signs in their vehicle.  That case remains under investigation, and no suspect information has been released.

Sign thefts are nothing new. Over 20 years ago, the wife of a prominent business leader was charged with stealing campaign signs.  One veteran of local politics recalled signs for candidate Leland Ayers, who went on to be elected to the council in 1973, being stolen by a teenaged volunteer for another candidate. The police were not involved in that incident, and the matter was quickly and amicably settled.

Trinidad is scheduled to appear in Burbank Superior Count on Monday, March 25.  The run-off election for Board of Education and City Council seats will be held on April 9.