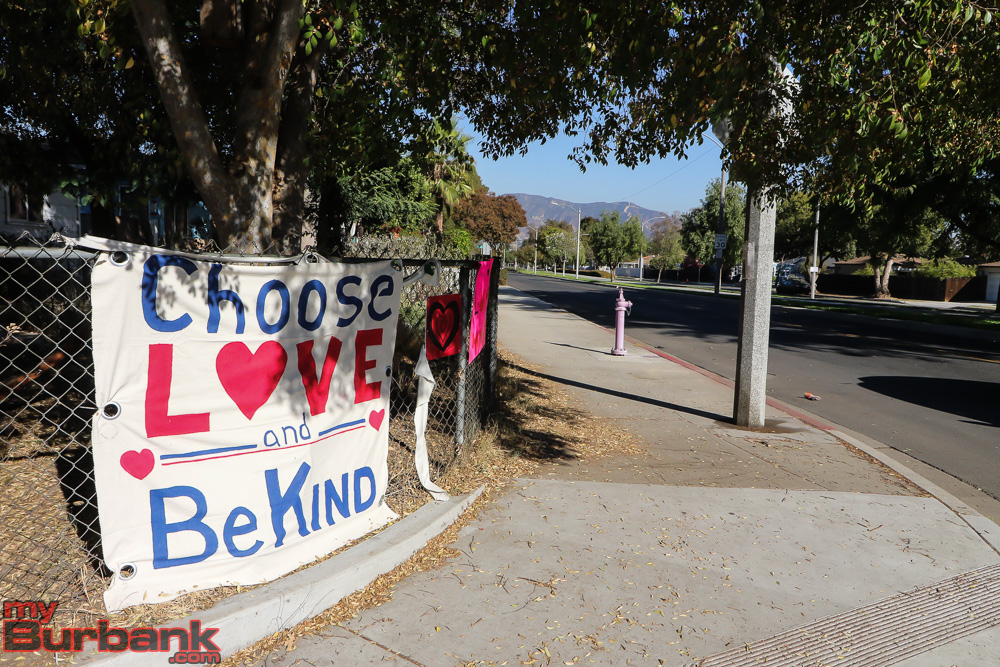 On the evening of Tuesday, November 7, Burbank resident Christy Xandrick and her daughter drove down Chandler Blvd. when they witnessed a vandal cutting down a banner outside a house at 904 N. Keystone St. which read, “Choose Love Over Hate.”

An uproar followed on Twitter after Xandrick shared her experience with the community. Residents were confused and upset that someone would cut down a sign simply proclaiming that love is stronger than hate, a message especially relevant in a time of constant controversy.

“I was in the passenger seat and we came to a stop on the corner of Chandler and Keystone and I saw a woman with a huge pair of scissors cutting down the sign!” said Xandrick. “My daughter started to drive and I told her about the woman and she literally flipped a u-turn right in the middle of the street and went back.”

Spotting the 60-some-year-old woman walking down Keystone St. toward Burbank Blvd., Xandrick and her daughter pulled up next to the vandal, who was wearing a grey t-shirt, blue sweatpants, and a white cap.

“…I asked, ‘Did you just cut down that sign?’ She had rolled up the sign and shoved it in her shirt! She gave me a dirty look and kept walking.”

Located directly across the street from Edison Elementary School, the banner has been promoting the message of “love over hate” since early this year. It is unclear why the vandal, who remains unknown, wanted to take it down. Some wondered if results from the election earlier that evening pushed her to choose hate.

Shortly after the sign was removed, homemade signs from residents were put up in its place, proving vandalism can’t vanquish love for long.

Upon reading Xandrick’s tweets, the banner’s creator, Tonya Kane, was notified of the incident and put up a new version of the “Choose Love Over Hate” sign the following Friday.