If one had to describe Chris Peres in a word or two as a baseball player, it might be that he’s versatile.

Peres, a one-time Burroughs High standout who just concluded his four-year collegiate career at the University of La Verne, wore numerous hats for the Leopards.

There were games when Peres played right field, while other times he pitched and on yet other occasions was the designated hitter.

In all three, Peres was able to excel which very likely helped him to be named the Southern California Intercollegiate Athletic Conference Player of the Year in 2019. 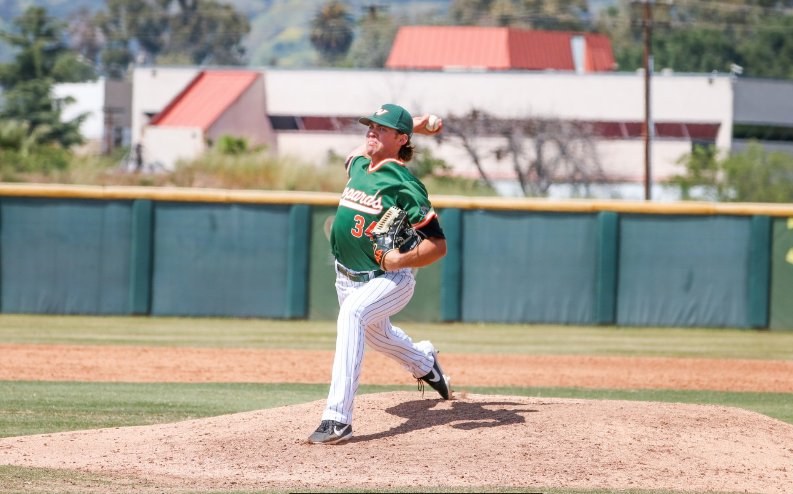 Chris Peres pitched as a starter and reliever for the University of La Verne. (Photo courtesy of Chris Peres)

This season the University of La Verne went 30-13 overall, 16-8 in the SCIAC and also played in its postseason tournament.

Peres will spend his summer playing baseball in Minnesota in the Northwoods League for the Willmar Stingers, said that every time his name was on the lineup card, he knew he was given another opportunity to shine.

Was there anything Peres did in order to keep ahead of the curve?

“Usually I like to visualize some plays or at-bats leading up to the game,” he said of his pregame preparation, “but my teammates relaxed and light energy keeps me loose and ready to play.”

Though difficult to master, baseball is something Peres, who was selected to the Division III All-America second-team by the American Baseball Coaches Association/Rawlings, has been playing for many years.

“Baseball is fun always because the more you learn about it the more information opens up because there is not one specific way to do something,” he said.

Peres, who batted .355 with a career-high 41 runs batted in and a personal-best 35 runs scored during his senior season, knows there are peaks and valleys.

“Failure is a big part of the game, so being mentally tough and sticking to an approach really helps you get over the slumps,” said Peres, a key contributor on the 2015 Indians’ Pacific League championship team.

That season Burroughs went 24-5 and 13-1 in league. After a bye in the CIF Southern Section Division II playoffs, it defeated Paramount 3-2, but dropped a 1-0 decision to Moorpark. 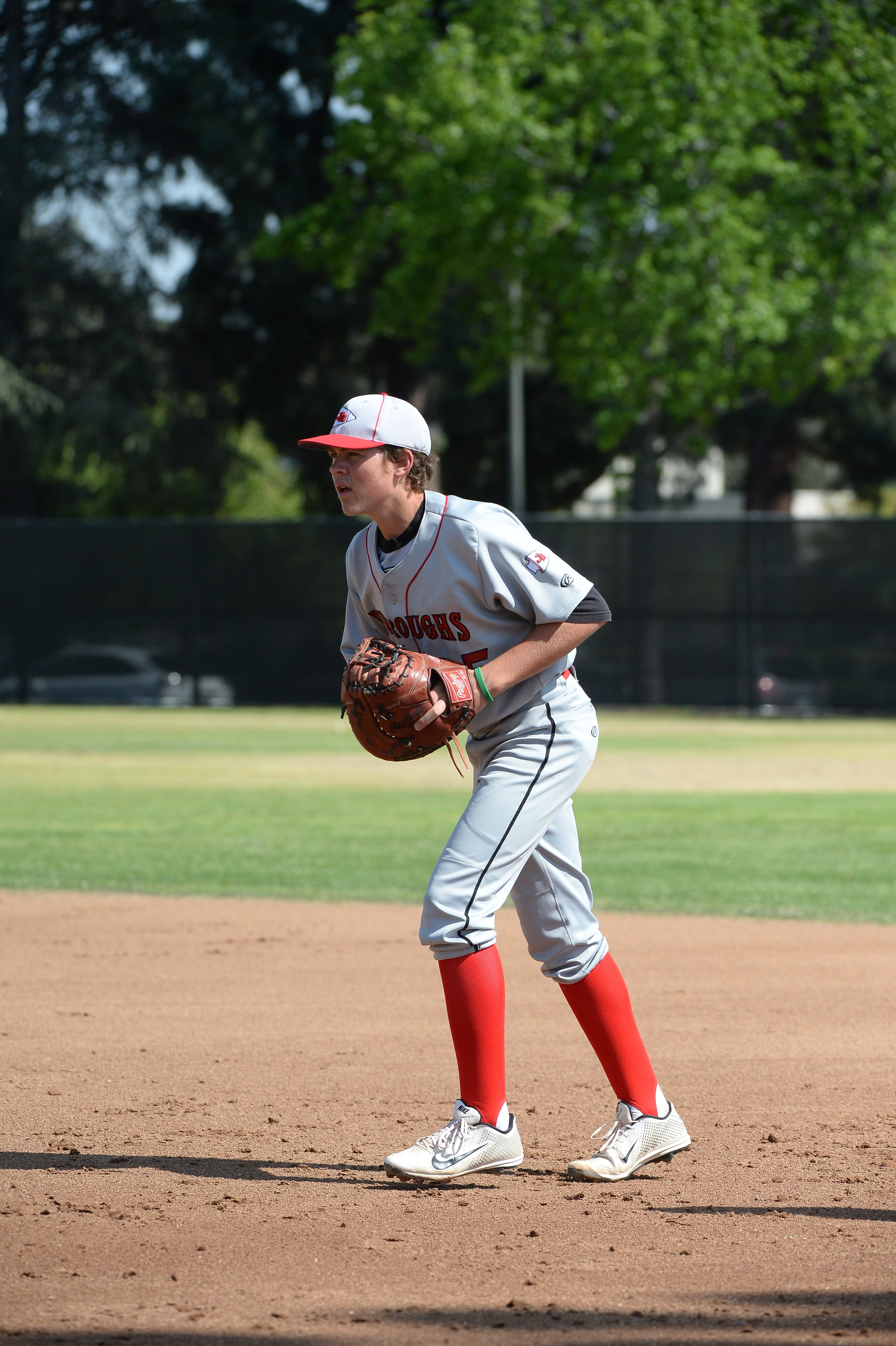 Chris Peres shown when he played for Burroughs High. (Photo by Mitch Haddad)

“Chris was one of several players who knew that if they wanted to be something someday, it would only occur through hard work,” he said. “He would be there before practice and stay late or go get hitting on his own. That is a determination that you cannot teach. It has to come from the heart.”

Sherwood said some players stand out because they are dedicated. Peres was one of them.

“People sometimes look at the result and do not realize the process. It’s work, day in and day out,” he said. “When no one is watching. When your friends are out having fun, you are working.”

Baseball is humbling, so what was the initial attraction?

“The competition and how every fundamental and technique matters throughout the game,” said Peres, who capped his college career with a .425 on-base percentage and a .456 slugging percentage, of baseball’s appeal.

Often times sports teach life lessons. What did Peres, who slashed 28 doubles with a best of 13 in 2019, learn by playing high school and college baseball?

“Baseball has taught me how to be detail-oriented, reliable and showed me how accountability can be used in daily life,” said Peres, who fashioned a 12-3 record as a pitcher across three seasons, including a 6-2 mark in 13 starts with a 3.06 earned-run average, 49 strikeouts and 15 walks in 2017.

Sherwood has brought along several prep players who succeeded after high school. Did he think Peres would do well at the next level? 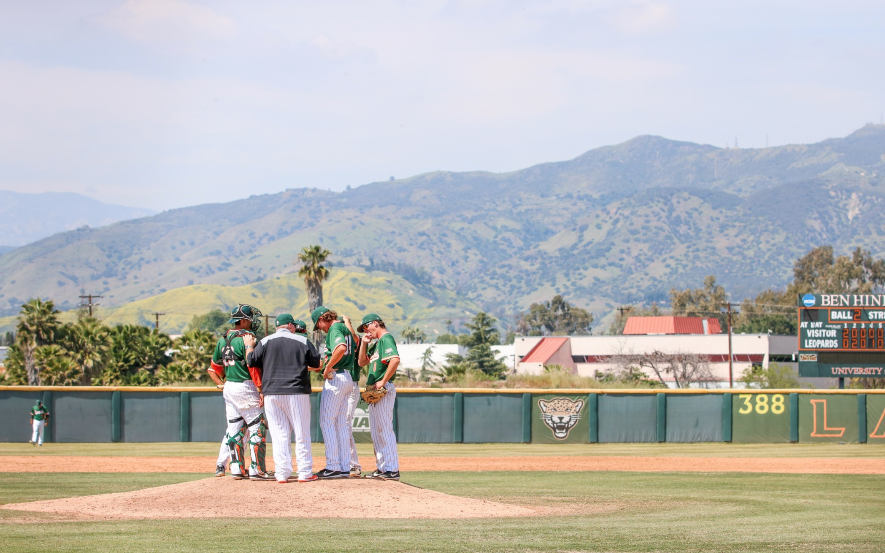 It’s a meeting on the mound as strategy is discussed. (Photo courtesy of Chris Peres)

“Even as a high school senior and a key member of our championship team, I knew that Chris has not reached his full development and strength levels yet,” he said. “I knew there was a lot more to come. He has not disappointed.”

Though baseball is baseball, there is a clear difference between high school and college hardball.

“High school and college baseball has many similarities, but the major difference is the pace and speed at which guys play,” said Peres, who tossed 150 innings, posted a 2.88 ERA and collected 17 saves in three seasons with a high of nine in 2018. “No matter the division guys play in college, the speed is different than high school.”

Sacrifice has been something Peres, who would someday like to coach or perhaps work in the front office of a Major League Baseball or NFL team, has willingly done in order to succeed.

“Sometimes I would have to leave class early for games, leave practice for class or even miss a class because of a game so it is about being responsible to get your work done,” he said.

Sherwood realized Peres, who ended his college stint with 188 hits including a personal-best 55 during 2016 and 2019 and 127 RBIs, was always willing to go the extra mile in order to become an even better player.

Goals are important for many because they serve as measuring sticks. Did Peres reach his goals in high school and college?

“I would say my main goal at both was to win the title at the end of the season and even though we won some conference titles, I wanted to hold up the outright division championship title,” he said. “Maybe during my coaching days I can receive one.”

Was there a most memorable game or games at the high school and college level?

“High school had many big wins, but none bigger than the one that won the 2015 Pacific League title,” he said. “For college, it was this season playing against our rival Cal Lutheran University. We were down two runs late in the game and I came up with a runner on and hit a game-tying home run out to center field.”

Does Peres have any advice for someone who wants to play baseball after high school? “There is good baseball anywhere you go, but choose somewhere you will get the opportunity to compete,” he said.