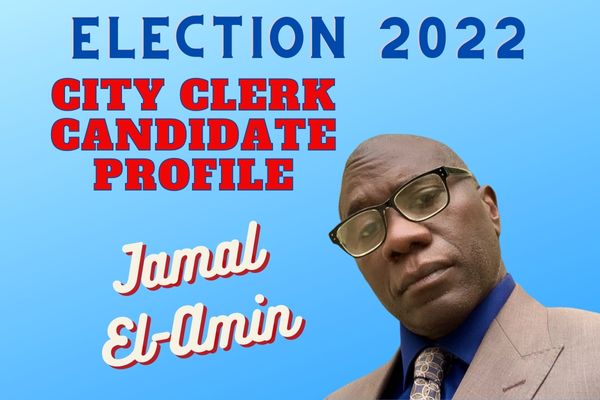 Jamal El-Amin is a native New Yorker who moved to Burbank one decade ago. The film and television editor and his wife are big fans of the comedy routines at Flappers, and El-Amin “love[s] the communal feel” and “engaged” residents of the city. Following his 2012 nuptials, El-Amin developed an interest in politics and has since graduated from the Residents Inspiring Service & Empowerment, or RISE, program for local leaders. The 2022 Burbank city clerk candidate states that he is optimistic this position “will provide [him] with a wonderful opportunity to interact with and serve [his] fellow residents.”

I’ve lived in Burbank for 10 years. My girlfriend, now wife, lived out here. I followed her, as all good husbands do. 🙂

I love how close and convenient everything is in Burbank. My wife and I go out to dinner, movies or comedy and are home in under 10 minutes. I’m so spoiled, I barely wanna leave Burbank. I also love the communal feel. It’s such a beautiful and well-kept city. The residents are so engaged and take a lot of pride in this city, and it shows.

Flappers. My wife and I are comedy nerds, and we love Flappers. We go about two to three times a month. In addition to the normal lineups, we’ve seen comedy greats such as Jay Leno, Kevin Hart and Bill Burr.

I’m a native New Yorker. I’m a State University of New York (SUNY) graduate with a BA in Communications. I studied TV broadcasting, which led me into a career of editing in the film and TV industry. The filmmaker in me had my California dreamer, so I moved to L.A. in 2008. I worked in film and did some of my own projects, but after I got married in 2012 my interest began to sway heavily into politics. I’ve canvassed for local candidates and recently did a lot of phone banking to help Gov. Gavin Newsom ward off his recall effort. Shortly after marriage I moved in with my wife in Burbank and instantly fell in love with the city. I started attending city council meetings and many other local events. I wanted to get more involved, so in 2021 I applied and was accepted into the RISE (Residents Inspiring Service & Empowerment) program, which taught me about city government and services. We learned from representatives from the City Council, Burbank Water & Power, Parks and Recreation and the City Clerk’s Office. Upon graduation I knew I wanted to serve my community. The City Clerk’s Office serves the community and is the keeper of Burbank’s history. It will provide me with a wonderful opportunity to interact with and serve my fellow residents.

I lost 50 pounds over the last year through intermittent fasting, keto diet, 7-minute strength and agility exercises and walking 10,000 steps per day, five days a week. It’s been my best health regimen in over a decade.