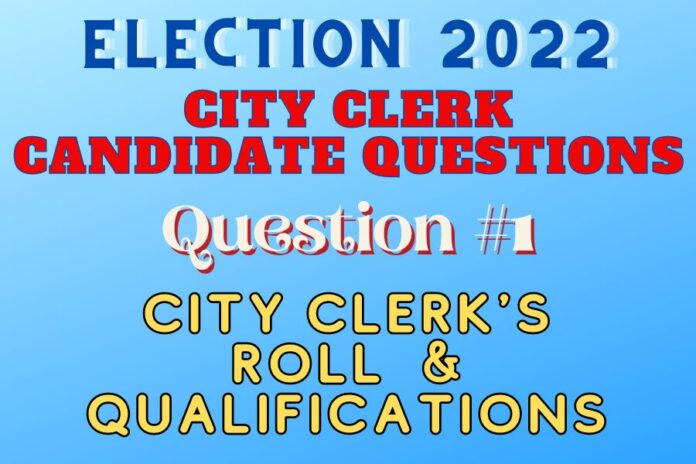 As part of myBurbank’s Election 2022 coverage, we have asked all of the candidates in the three races some tough questions to help voters decide who deserves their vote.

In the race for City Clerk, there are three candidates, and we asked three questions. We told the candidates they could write as much as they wanted, and we did not edit their responses in any way.

Today is Question 1 of 3: What is your understanding of what the City Clerk’s role is in the organization and to the community, and why do you feel you are qualified for the position?

The Burbank City Clerk serves as the liaison between the public and the City Council; ensures that all actions of the City Council comply with federal, state, and local statutes; administers the federal, state, and local procedures through which government representatives are selected; and acts as the Records Manager to preserve and protect the public record. In Burbank, the City Clerk also oversees the passport office. The City Clerk is an elected position in Burbank, rather than an appointed position, for an important reason: They work for the people of Burbank and should be elected by them as well.

In my current position with the Burbank Unified School District, which I have held since 2010, I oversee elections, mandatory disclosures (such as Conflict of Interest forms), process public information requests, produce and archive Board of Education meeting agendas and minutes, and serve as the custodian of the District’s policies and administrative regulations. There is a remarkable similarity in the duties of the City Clerk and my current duties. I have developed good relationships with our local and state elected officials and I have a reputation for being a responsive and dependable problem-solver in my service to Burbank students and their families.

I was responsible for creating the necessary reports, resolutions, and filings for the District to comply with Senate Bill 415 (which consolidated our municipal elections with Los Angeles County). During this process I attending training provided by the County on the VSAP (Voting Solutions for All People) modernization effort. I have a B.A. in Honors English and an M.A. in Business Writing. I believe that my education and my professional experience would make me an effective City Clerk who will perform the duties of the job with trust and transparency.

One of the primary roles of the Clerk’s office is to keep the public informed on city government activities. I love working within the community. I’ve done a lot of door to door canvassing in prior elections. I’ve also done extensive work with young people coaching a little league baseball team for many years. Having an enthusiastic and engaged community is the lifeblood of a healthy democracy and I will keep that connection vibrant and strong.

The City Clerk has a vital full-time administrative position in the City of Burbank, overseeing the City Council’s decision-making process, city elections, management of the city’s records including compliance of the Public Records Act, appointments for 22 boards and commissions, the Passport Office, and maintaining the City Charter and Municipal Code.

The City Clerk is the conduit of information for Burbank residents and Council; ensuring residents have a direct link to their local government. It is the City Clerk’s responsibility to provide high quality customer service to the public when residents inquire information regarding the City Council’s decisions, as well as City departments, resources, and programs. The City Clerk ensures that the City Council’s decision-making process is transparent to the public and in compliance with federal, state, and local regulations, such as the Ralph M. Brown Act, which guarantees the public’s right to attend and participate in open public meetings.

The agenda process is managed in partnership with the City Clerk’s and City Manager’s Office, including the agenda forecast, agenda management, review of reports, agenda posting, and proper recording of meeting minutes. The City Clerk attends every Council meeting and administers the City Council’s vote on every item on the Council Agenda. As a Department Executive, the City Clerk works with the City’s Executive Team to ensure information about the City Council’s decisions are being disseminated to the public with integrity and transparency.

The City Clerk is also the Elections Official, conducting all municipal elections as scheduled and any special election which may be called. The City Clerk plays a vital role in the success of all candidates, providing support through the election process, ensuring compliance of the California Elections Code, managing the required Fair Political Practices Commission filings, and working with the Los Angeles County Registrar-Recorder/County Clerk Office.

My 20-year career in the City of Burbank and my current role as the Administrative Analyst II in the City Manager’s Office makes me the most qualified candidate on the ballot for Burbank City Clerk. I have an essential, active role in the City’s administration and legislative process and know the City’s internal operations, administrative procedures, policies, and expectation for high quality customer service well. I have served in various leadership capacities, including community outreach, staff development, and program management. I have effectively managed teams of 40+ City employees, implemented program policies, and executed youth programs with 350+ daily participants. I have also supervised the daily operations of multiple facilities in Burbank. I lead with integrity, purpose, high work ethic, and a positive attitude My leadership, administrative, and management experience will be essential in leading the City Clerk’s Office.

I work with the City Clerk’s Team daily to manage the Agenda Process for all Regular, Joint, and Special City Council meetings – always ensuring the City Council’s decision-making process is thorough, transparent, and accessible to the public. I have built a strong relationship with the City Clerk’s Team built on mutual trust and respect. I have a strong work relationship with the 14 City Departments and oversee the submission and review of staff reports and presentations going to the City Council.  I manage the details of each Council meeting including the call-in public comment process, Mayor’s Script, Announcements, Council Proclamations, and Presentations. I also track legislation that affects our community and oversee the City’s community funding requests to the United States Congress and California State Assembly.

As the staff liaison to the Racial, Equity, and Diversity Council Subcommittee, Charter Review Committee, and Domestic Violence Task Force, I manage the production and posting of the agendas and minutes for these meetings. I am well versed on Granicus, the online meeting and agenda management program used in the City.

I am honored that our current City Clerk Zizette Mullins is endorsing my candidacy and trusts me to lead the City Clerk’s Office and fill the seat she held for 10 years.  I would be proud to continue the long legacy of Burbank City Clerks who worked their way up through the City of Burbank with in-depth understanding of the City’s government and administrative functions.

I am a member of the International Institute of Municipal Clerks and the City Clerk’s Association of California. I graduated from UCLA and have a Master of Public Administration from CSUN.  As I said on my Candidate Video that aired on the Burbank YouTube Channel on September 7, 2022, I have the knowledge and experience to hit the ground running on day one.  You can learn more about me and my goals, at www.vivianaforcityclerk.com and follow me on FB and IG @vivianaforcityclerk and Twitter @vivianaforclerk.