With the subject of mental health and shootings at schools and in public places taking place in communities across the country, the Burbank City Council on Tuesday night had its own discussion on the topic as it relates to a police officer on school campuses.

The position, called a school resource officer or SRO, has existed in Burbank since the 1970s, according to discussions about the program at a February Burbank Unified School District meeting.

Burbank police, in a report to the city, stated that the SRO program has been in place since the 1980s, and at its peak, had six officers, one of whom was assigned to the Outreach Program.

There is currently one SRO.

The SRO program is being discussed because police applied for and received a federal grant.

Burbank Police Chief Scott LaChasse said at a January city council meeting that when police applied for the grant, they were not told how much funding they would receive and were not aware what the share of the cost was until they received notice of the award.

The Department of Justice granted $375,000.00 for three SRO positions for three years. If the city were to accept the grant, they would be required to fund the three officers for a fourth year, according to city documents. The salary of one SRO is $130,000.00 a year. That means the city would need $1,185,000.00 to staff the program.

When city council members discussed the matter in January, they expressed hope that the BUSD would be able to help financially.

Council member Bob Frutos, an SRO for 13 years, said in January that there was a shooting at a Hawaii high school.

“It happens anywhere,” Frutos said, adding he hoped the school district would be able to partner with the city and help finance the program.

LaChasse noted at the school board meeting that this is the first year police do not have to submit budget reductions since he has been in Burbank. He also informed council members that the most common model in California is for joint funding.

“The group of personnel eliminated most recently were the SROs because we had already decimated the patrol force,” LaChasse said. The city, like the school district, downsized when the economy crashed, he said.

Tuesday’s council meeting at City Hall included almost three hours of public comments by about 40 people, and it was almost midnight when discussions on the SRO program began.

The SRO program was mentioned by at least three members of the public, who supported it.

Elise Stearns-Niesen, a member of the police commission, spoke as a resident in support of the program. She expressed disappointment with staff’s recommendation to decline the grant and fund one SRO.

She said Burbank should avoid being a “reactive city when something tragic happens,” but be a “forward thinking city” that values its youth. She favored the idea of joint funding.

A 31-year former Burbank police officer, Eric Rosoff, who worked as an SRO, said he wondered if the grant was well thought out. Regardless of how the council planned to proceed, Rosoff said something needed to be done to get SROs back, among other comments.

Most council members lamented the cost to fund three officers for three years but were supportive of adding at least one officer. 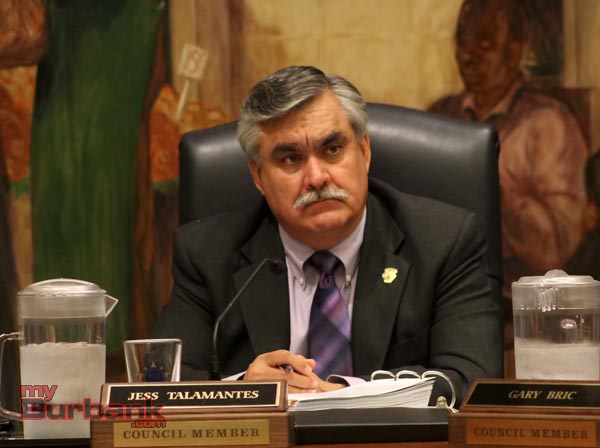 City Councilman Jess Talamantes did not vote with the majority (Photo By Ross A. Benson)

Mayor Emily Gabel-Luddy also expressed interest in having a joint meeting with BUSD to discuss possible funding ideas for a SRO in the future.

In a 4-1 vote, with Council member Jess Talamantes dissenting, the council approved having police submit a request for one officer to work as an SRO for the 2014-15 fiscal year.