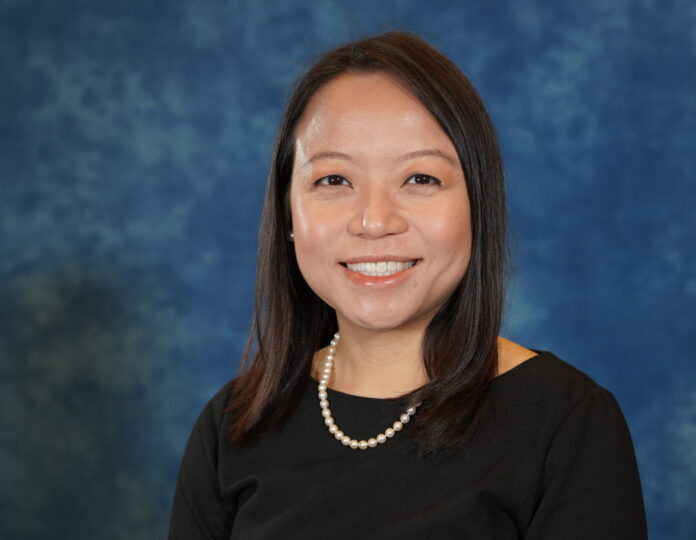 Krystle Palmer is persisting in preserving Burbank’s financial holdings through her role as city treasurer.

From a young age, Palmer showed an interest in the subject of finance while growing up in the Philippines. As she was exposed to the inner workings of an enterprise owned by her family, the City of Burbank professional developed an enthusiastic passion for fiscal matters that blossomed throughout her academic studies.

“My parents were small-business owners, so I spent a lot of time in the office when I was a child,” Palmer said. “I did my internship in investment banking in college, and this inspired me to pursue my master’s in financial engineering from Columbia University.”

After obtaining her bachelor’s degree from Ateneo de Manila and the master’s from Columbia, Palmer worked for a management consulting firm and a fund of hedge funds back East. She later relocated to Southern California following her now-husband earning a position at Disney. The couple then had twins, and Palmer was a stay-at-home parent for a time. She chose to resume her career when the city treasurer job emerged. Palmer explains that this opportunity amalgamated her professional expertise and personal desire to stay involved in Burbank.

“I knew I wanted to go back to work eventually, but it had to be for the right opportunity,” Palmer said. “The city treasurer role is perfect because it leverages my interest and experience in finance while still allowing me to be deeply involved in my community.”

Palmer was appointed treasurer by the Burbank City Council in 2019, and a 2020 vote by Burbank residents resulted in her retaining this position. With this victory, she secured the highest number of tallies ever received by a city candidate. Public funds are protected as a result of Palmer’s guidance, and she has additionally made moves to educate locals on their personal finances and boost the savings of neighborhood members. This includes Palmer leading a children’s savings program in collaboration with UMe Credit Union, speaking at the Buena Vista Library about the importance of one’s attitude toward money, and developing an upcoming initiative with the Burbank Chamber of Commerce that will encourage residents to support Burbank eateries while helping them spend less on meals.

“More than just the day-to-day aspect of managing the city’s investment portfolio, I love to think of ways that my office can empower Burbank residents with their finances,” Palmer said.

There are numerous triumphs Palmer has overseen as treasurer, including the department halting check fraud attempts adding up to more than $1.4 million this past year. Palmer states that this has led to zero monetary losses for the city. In addition, Burbank’s financial gains have regularly been robust under her watch.

“Given the volatile markets of the past few years, I am proud that our [approximate] $500 million investment portfolio has consistently yielded returns that outperform our benchmark,” Palmer said. “Higher investment returns generate additional income which translates to more services we can provide to residents, so I am always looking for any extra yield when analyzing investments that meet our criteria. For example, a $3 million investment that returns 3.5% versus 3.4%, though seemingly a small difference, generates an extra $15,000 over a span of five years.”

“Our mandate is safety, liquidity, and yield, in that order, and I am proud that I have safeguarded our public funds,” Palmer added.

Although only five employees work for the Office of the City Treasurer, all of Burbank’s ingoing and outgoing payments are managed by this department. The incoming Automated Clearing House payments that were handled by these workers in 2021 totaled $442 million, while an additional $151 million worth of checks was processed by the office during this year alone. Palmer and her colleagues work each day to ensure that the finances of the City of Burbank are handled with care as they serve residents.

“Since my role is elected, I answer directly to the people of Burbank.” Palmer said. “This allows independent oversight over our finances and ensures that taxpayer dollars are managed responsibly. We are the watchdogs for all checks and outgoing transactions, accounting for all bank activities to the penny.”

Before she stepped into the role of treasurer, the choice to move to Burbank was inspired by Palmer’s love for the city’s “self-contained” quality within the Los Angeles region. Her three children were all born in the city and attend local schools. Palmer notes that it’s “very convenient” for herself and her family members to live in an area with accommodating characteristics such as plenty of shopping options, friendly faces in town, and more.

“When you need to buy something, Burbank has all kinds of stores available – most major chains in addition to our numerous small family businesses,” Palmer said. “We chose to move here because of the small-town feel of our city. People are welcoming and it feels like everyone knows one another. Everyone we’ve met is down to earth and genuinely kind.”

Considering her list of achievements as Burbank’s treasurer, Palmer is evidently working in a field that is in alignment with her purpose. When asked about what words of wisdom she would impart to fellow professionals who are going after their career ambitions, Palmer advises others to make use of any available tools within reach and not be hesitant in chasing their goals.

“I would tell them not to be afraid to take advantage of all the resources out there to pursue their dreams,” Palmer said. “Coming from a third-world country where there were few opportunities available for the average resident, I am always in awe of the access and opportunities provided here in the United States – from public schools, libraries filled with books, scholarships, financial aid, to government and privately funded grants and other subsidized programs like free museum access.”

In addition, Palmer explains that those who “work hard, are well-prepared, and open and ready to capitalize on a lucky break or two” are highly likely to reach success. This, in combination with a bold attitude and some persistence, will likewise assist workers in landing a position suited to their skill set, she believes.

“Our culture often promotes instant gratification, and we sometimes need to remind ourselves of the value of discipline and sacrifice,” Palmer said. “I would also advise people to take more chances. Sometimes, you just have to go for it. You don’t necessarily need experience. You would be surprised that people are often willing to give you a chance as long as you have done your homework and are genuinely passionate. Most people want to help others, especially those early in their life journey. All you have to do is ask, and the worst they can say is no!”

To learn more about Krystle Palmer, read her City of Burbank bio here.