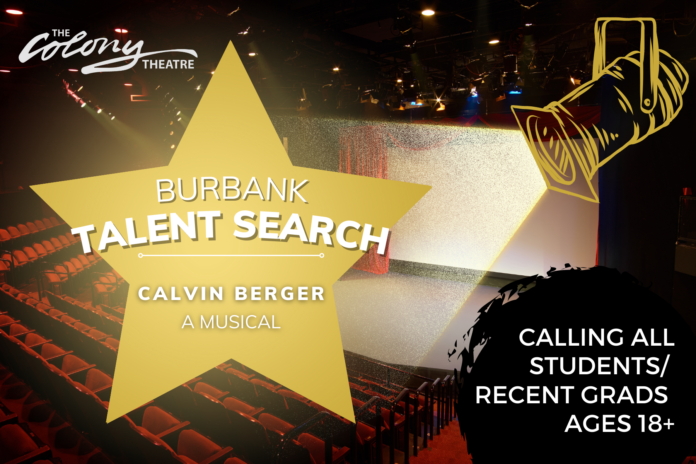 The Colony Theatre in Burbank is holding a talent search for its upcoming production and west coast premiere of the musical, Calvin Berger. Loosely based on the story of Cyrano de Bergerac, the musical Calvin Berger is the contemporary and hilarious story of unrequited feelings, love notes, and physical insecurity among high school seniors.

Current Burbank students (18 and over) and recent grads are invited by special invitation to audition for the production. A minimum of four students will be selected to move directly to final callbacks with a chance to be seen by some of LA’s top industry professionals and the potential opportunity to be a part of an AEA production.

To submit to The Colony Theatre’s talent search, students are asked to submit a self-tape of themselves singing their best 32 bars of any contemporary Broadway song of their choice. Submissions are due by October 31st and can be submitted via email at: michaeldonovancastingtapes@gmail.com. Please slate your name, height, vaccination status, and your Burbank student ID card in the video submission along with an attachment of your headshot and resume, and “Burbank Student” written in the subject line of your submission.

THE COLONY THEATRE IS SEEKING:

[CALVIN]  Male, all ethnicities, over 18 to convincingly play 17. Charming, witty and lovable, but not traditionally good-looking (for clarity of plot, he ideally has a big nose). Maybe a bit on the nerdy side. Funny, self-aware, super-intelligent, and a bit neurotic. VOCAL RANGE:  Baritone up to F#.

[MATT] Male, all ethnicities, over 18 to convincingly play 17. Athletic, likable, happy-go-lucky, earnest, and not what you’d call intelligent. Standard pretty-boy jock, but with a good heart and good intentions. Think Zac Efron in the original “High School Musical”. VOCAL RANGE:  Bari-tenor with a rock sound, must be able to belt an A.

[BRET] Female, all ethnicities, over 18 to convincingly play 17. Quirky, witty, sarcastic but lovable. Not what we’d consider “conventionally” good-looking, but beautiful in her own way. Alternative, indie, “best friend” vibe. Think Juno in “Juno”.  VOCAL RANGE:  Alto with a good high belt/mix up to D.

The Colony Theatre recently announced the new production of the musical Calvin Berger with preview performances beginning on February 16, 2023. The opening of the production is set for Saturday, February 18th at 8pm.

Loosely based on the story of Cyrano de Bergerac, the musical Calvin Berger is the contemporary and hilarious story of unrequited feelings, love notes, and physical insecurity among high school seniors. Smitten with the beautiful Rosanna, Calvin is paralyzed by self-doubt due to the size of his nose. No words of encouragement coming from his quirky best girlfriend Bret seem to help. Rosanna finds her head turned by the good-looking new student, Matt, who is painfully shy and unable to voice his mutual attraction to her. Hoping to forge a closer relationship to his love, Calvin offers to pen Matt’s eloquent love notes to Rosanna. As deceptions unravel and truths are revealed, Calvin is about to learn that sometimes what you’re looking for is right under your nose.

“I am thrilled to bring this musical to The Colony stage,” said Producing Artistic Director, Heather Provost. “The music is fantastic, the story is timeless, and the contemporary element of a present-day high school setting makes it a wonderful piece of theatre — especially with Richard Israel directing and the entire dream team we’ve put together.”

The book, music, and lyrics are by Barry Wyner and the productions is directed by Richard Israel with music direction by Anthony Lucca. “Calvin Berger is a joyful retelling of the Cyrano story, and it’s a rarely produced, under-the-radar gem of a musical,” said Israel. “Set in a modern-day high school, the show takes us through the triumphs and tragedies of adolescence in a propulsive and hugely entertaining way. It is fresh, funny, and wonderfully resonant, and I’m honored to be partnering with The Colony to introduce it to Los Angeles audiences.”

Barry Wyner (Book, Music, and Lyrics) has written several musicals including Austin the Unstoppable, The Counselor, Sugar Plum, Stop! and Something to Say. He has composed music for several world premiere plays, a BBC Radio play, The Actor’s Studio, AMDA, 78th Street Theater Lab, and more. He has won the Kleban Prize, Jerry Bock Award, Richard Rodgers Award, and Noel Coward Prize. He is a member of the BMI Advanced Musical Theatre Workshop.

Richard Israel (Director) is an LA and New York-based director specializing in the development of original musicals. Directing highlights include Violet (LA Stage Alliance Ovation Award for Best Direction of a Musical), Floyd Collins (Ovation Awards for Direction and Outstanding Musical), 110 In the Shade (Ovation Award for Outstanding Musical), and Avenue Q (Ovation Award nomination for Best Musical). He is currently working on the development of several original musicals including A Very Brady Musical (working with the original series creator Lloyd Schwartz) and King of Pangaea, which was recently presented at the NAMT Festival of New Musicals. He is proud to have been the on-set theatrical coordinator for the multiple Emmy Award-winning HBO series Big Little Lies, directing all the Avenue Q theatre sequences in the series. He is the recipient of the LA Drama Critics Circle Career Achievement Award for Directing.

Heather Provost (Producer) is a Tony, Drama Desk, Outer Critics Circle, and Drama League Award-nominated producer. Critically acclaimed hits on Broadway include Reasons To Be Pretty by Neil LaBute (three Tony nominations including Best Play) and the musical [title of show] (Tony Nomination for Best Book of a Musical). She produced the hugely successful Under My Skin segment of ‘The Pink Campaign’ on Broadway for which all proceeds went to the Susan G. Komen Foundation. Provost produced the short film Harmony starring Jason Alexander and the feature film Racing Colt (which she also co-directed). She produced three seasons of the It’s Showtime series at The Colony Theatre and was the Creator/Director of Camp C.R.E.A.T.E. at The Colony for which she was recognized by the California Legislature for her service. Also at The Colony, she directed and produced Driving Miss Daisy starring Donna Mills. Other producing credits include Chix 6 and the series Penelope P.C.S.A. starring Dave Foley. She was associate producer on the feature films To The Beat! and its sequel To The Beat! Back to School. She recently co-wrote A Joyous Christmas starring Natalie Knepp, Michael Rady, and Bonnie Bedelia for Hallmark Movies & Mysteries as well as Hallmark’s hit Season for Love starring Autumn Reeser and Marc Blucas, which dominated the weekly cable ratings and became one of Hallmark’s most popular summer movies of all time. She is currently in active development on multiple projects for both Hallmark and Stargazer Films as well as an upcoming rom/com feature film for MarVista Entertainment. She recently sold a rom/com series to a popular streaming app and is currently in pre-production on the feature suspense/thriller Among which she co-wrote and will also co-direct, as well as the soon-to-be released crime drama podcast, Hope Haven.