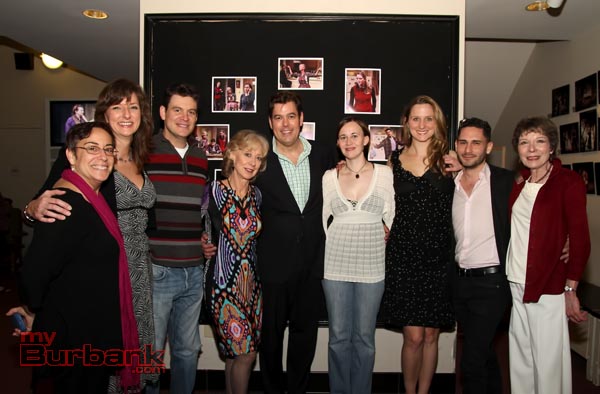 The Colony Theatre’s 39th season continues strong with Miracle on South Division Street. Beautifully realized characters drew me across the threshold into their world, then proceeded to dump a big bucket of comedy on my delighted head.

TOM DUDZICK’s play drops us into modern-day Buffalo, New York, where the livin’ was never easy, even before the paychecks and the mom-and-pop shops started disappearing. But the working-class Nowaks aren’t ones to complain. Their late grandfather, an immigrant from WWII Poland, knew how bad the world could really get, and it could be far worse even than a city where the rust belt and the snow belt slap each other with a vengeance.

Besides, granddad had received a miraculous vision of the Virgin Mary in his barbershop, shortly after coming to America. He’d built the shrine to her, complete with a life-sized statue, as a proud and constant reminder to his family. “I always knew we came through because of her,” the devout and widowed Clara (played by ELLEN CRAWFORD) tells her three adult children.

Clara’s children did always feel a little special because of what Clara’s father had told them. There’s the easygoing and Jimmy (BRIAN IBSEN), who does minor repairs for his mom. He’s dating a Jewish girl. Hasn’t told mom yet.

There’s the no-nonsense and intense Beverly (MEHGAN ANDREWS) who was probably the one that kept Jimmy in line when they were growing up.

And then there’s the cerebral and earnest Ruth (KARIANNE FLAATHEN), who for some reason has stopped going to mass. But what’s really weighing on her is granddad’s explosive deathbed confession. Which she wants to share with the rest of the family. And then the world.

Thanks to all the actors’ comedic timing and sharp portrayals of their engaging characters, the fun begins as soon as the play does, and the hilarious payoff of the third act is even more of a belly shaker.

Dudzick bases his play on a real life, 20-foot tall shrine to the Blessed Virgin Mary, which had been erected next to a Buffalo barbershop some 45 years ago. It seems that Mary had appeared to the barber with a message concerning world peace. (Dudzick tells us in the program notes that “she was in favor of it.”) The local Catholic Church was skeptical of the barber’s story and discouraged prayers or coins to the shrine. Yet, today the shrine still stands, lovingly maintained by the locals, long after the local church (and much else besides) had pulled up stakes. “There’s a story here,” Dudzick said to himself.

And indeed there is, especially as brought to vivid life by Director BRIAN SHNIPPER and his great cast, along with a richly-detailed and evocative set.

POSTSCRIPT: Impressed with the Colony’s magic on the stage? You’re not alone. Someone is willing to match our contribution, dollar for dollar. If we Colony fans can donate $25,000 by December 31, then the magic of matching grants will turn it into $50,000.

Miracle on South Division Street continues through Sunday, December 16. Performances are Thursdays and Fridays at 8 p.m., Saturdays at 3 p.m. and 8 p.m., Sundays at 2 p.m. (But no performances through Thanksgiving weekend, November 28 to December 1.) Prices range from $25 to $45, with various discounts available. The Colony Theatre is located at 555 N. Third St. (at Cypress). For tickets, call the Colony Theatre Box Office at 818-558-7000 ext. 15 or go online at www.ColonyTheatre.Org.