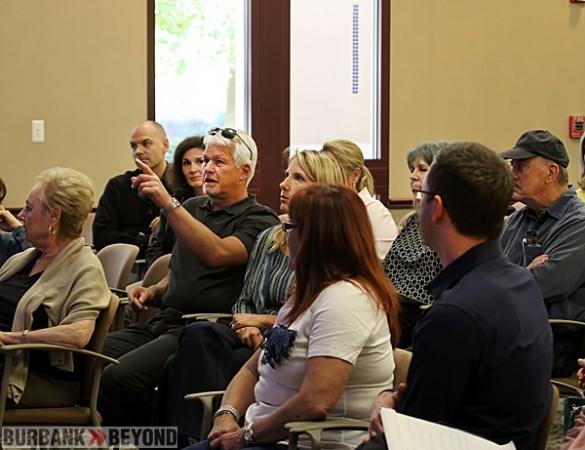 The meeting was quite cordial, which was in sharp contrast to one held several months ago when a housing development  being considered for the site in the city’s Rancho area drew an overflow crowd of mostly angry residents.  City of Burbank Planning Department staff members as well as several representatives from LILA  were at the meeting The 40 or so people in attendance seemed pleased with the proposed school.  Even those who had some concerns, seemed willing to take give the project a chance.

LILA President and CEO John Fleck, outlined the school’s plans to create a campus using the existing building.  Except for signage and landscaping, the site will look very much like it does today.  The extensive remodeling that they are planning will take place on the interior as the building is configured into classrooms.  The school will be for students in grades 6-12.   Initially, they expect 220 students on the site, with a projected growth to 350 students.

Students from LILA’s schools in Tarzana, Pasadena, and the Los Feliz area will be shuttled into the new campus from the existing schools, which Fleck noted would reduce the number of cars coming to the site.  Some students who live near the site, or whose parents work in Burbank, might arrive by private car.  It was noted with some laughter, that two students who live on Mariposa St. around the corner from the site, would most likely walk to school.

Students enter LILA at the pre-kindergarten level at their Los Feliz location, according to Dr. Elizabeth Chaponot, Head of the School.  They are in a “total immersion” program in French through the first grade.  “Most of the day is in French, with a few hours of English language to reinforce English,” she said.

Escrow on the sale of the site to LILA is expected to close in early June.  A public hearing before the Burbank Planning Board is tentatively scheduled for August.  The earliest construction work at the site could begins is September.  The school would like to open for students in September 2013.

According to  Dr. Chaponot,  “We are looking at an extended time, a full year, to do the remodeling, as opposed to speed.”

While the interior classroom work is their first priority, a second phase of construction will involve tearing up the large paved parking lot a the rear of the site, and converting it to a grass soccer field and basketball courts.   Fleck noted that while they will have a field and courts, sports is not the school’s focus.  They are not part of the California Interscholastic Association (CIF), and don’t plan on having games on the site.

Although there were a few concerns voiced about construction noise and traffic congestion, most of those in attendance seemed please with the school’s plans.  The proposed plan has already incorporated many of the concerns of Rancho residents.    Bill Smith, who lives in the Rancho, seemed to sum up the sentiment of the residents who feel this proposed use of the site is more compatible with the equestrian neighborhood that previous development ideas.