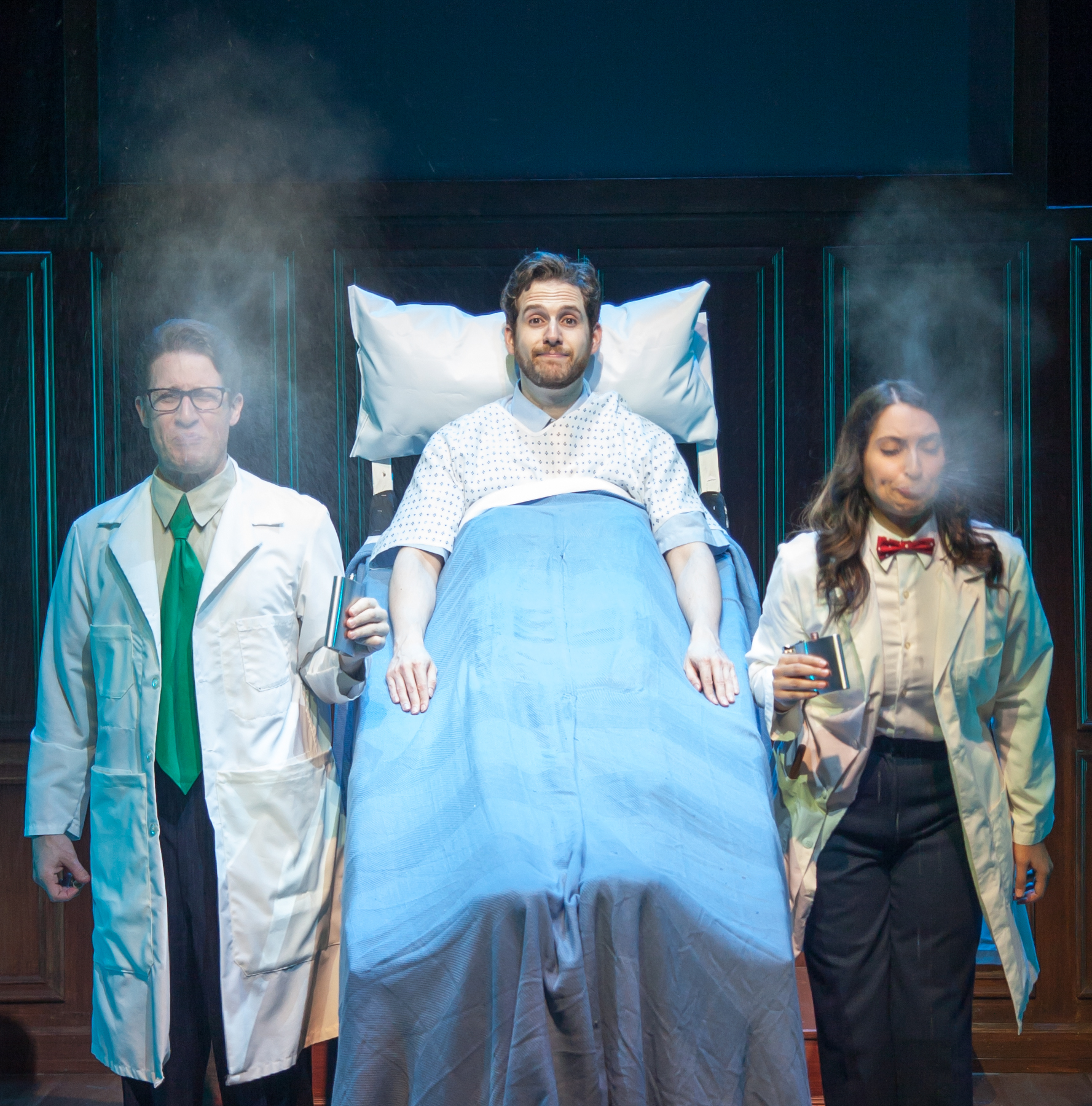 I grew up with comedy, therefore I take it very seriously. That is why I am so sick of seeing comedies being anything but funny. The Complete History of Comedy (abridged) that is playing now at the Falcon Theatre is not only funny, it is a hysterical, hilarious and it made me laugh my tush off. My abs still hurt from laughing so hard.

The Complete History of Comedy (abridged) stars Zehra Fazal, Marc Ginsburg, and Mark Jacobson and they tell the story of the recently discovered Chinese book called the Art of Comedy by Ah Tzu. There are 13 chapters in the book, but the final one is missing. Therefore, we get 12 chapters of hilarity. The play was originally written and performed by Reed Martin and Austin Tichenor and is directed by Jerry Kernion.

You know you just strapped in for a major laugh ride from the very second the lights go down. That is when the three stars come out dressed like Cavemen and one of them gives birth to an unlimited supply of babies. During our performance, there was an improvised moment between an audience member and the three leads that proves these actors have the comedy chops to pull of this show.

Now it is time for the three actors to tell us its premise and begin with one of the oldest jokes. Why did the chicken cross the road? We know that joke already, but they take it and tell it in different styles throughout the ages like Greek Philosophy, Shakespearean, Mime, Vaudeville and other different way. A funny is joke made funnier with the different interpenetrations.

As we all know, not everyone has a funny bone. There are a lot of unfunny people out there and they show us some of them including mimes. I know they want us to believe that they cannot make us laugh, but they do not succeed. Mimes are amusing.

Next up, they tackle politically incorrect issues like Stereotypes, Religion, Politics and Languages. Warning, you might get offended by what they say here, but they do not really say anything offensive. I am still telling some of the jokes that they told in this chapter. That is what comedy is really all about.

Before they close out the first act, they take the work of Chekov and tell his stories with famous catchphrases from popular TV sitcoms like All In the Family and Good Times. But it is the final scene that is a work of pure genius. They act out a Charlie Chaplin like Keystone Cops chase scene from the Silent Movie era with a strobe lighting. They get a standing ovation for that and everything they did leading up it.

After a quick break from hysterics, it is time for the curtain to go up for the second act. We start it off with a fast talking con man, famous duos like Abbott & Costello and Laurel & Hardy, and a Tiny Tim like song. Next up is a Carrot Top like shtick where the two doctors take items out of a man’s stomach they are operating on. Lots of slapstick humor, which leads to them, doing an improvised bit with two audience members. One that can either go off well or fall flat on its face, and of course they nailed it. Thankfully, the audience members had a good sense of humor and helped to make bit a successful one.

During this time we are living in, we can’t avoid political humor. Yes, there are jokes about our current president. Once they made fun of him and all the schmucks who came before him, they go off on the Supreme Court. Or should I say, Supremes Court because they do an Avenue Q type song number to the tunes of The Supremes and they have puppets representing the other 6 members of SCOTUS.

And now it is time for the final scene and the newly discovered 13th chapter of the book. They send in the clowns literally to tell it, Rambozo the Clown that is. He has a lesson for them and all of us. One we should all listen to because it is something we need to follow.

But more importantly we all need to go see The Complete History of Comedy (abridged) at the Falcon Theatre before it closes on April 23rd. They say laughing is the best medicine and I have not been sick since I have seen it.

Seriously, I can’t remember loving a play as much as I loved this one. I laughed until hurt and so did everyone else in the audience. This is the type of play I want to see carry on for ages because everyone should know The Complete History of Comedy (abridged).

I also think the actors of this production need to be the ones to take it on tour and make people all over the World smile. Zehra Fazal, Marc Ginsburg, and Mark Jacobson worked so well off of each other, I can’t see anyone else playing their roles as well as they did.

And now comes a little bittersweet news. This production was Garry Marshall’s final selection for his theater before he passed away last year. This season is going out, the same way he lived his life, bringing joy to others. Not only is it his final selection, it is also the last production at the Falcon Theatre. Don’t worry it is not closing down, it is getting renamed after the man who founded it. Starting next season, it will be renamed the Garry Marshall Theatre. A fitting tribute to man who made this world a better place for over four decades and counting.

Tickets for The Complete History of Comedy (abridged) are available for performances Tuesday-Saturdays nights and Sunday afternoons, now until April 23rd, at the Falcon Theatre website and the Box Office located 4252 Riverside Drive, Burbank, CA 91505. For questions, call (818) 955-8101.