Mayor Bob Frutos and Councilman David Gordon visited Incheon from Nov. 17 to 21 to attend the unveiling of an art sculpture titled “Dancing Stones” that is a gift from the city of Burbank. 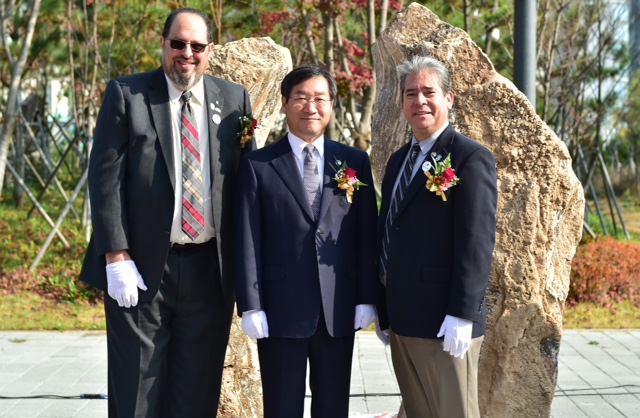 Incheon was adopted as the first sister city of Burbank’s Sister City program in 1961. To mark the 50th anniversary of the sisterhood, Incheon sent a sculpture to Burbank in 2011, said Sharon Cohen, former Library Services director. The Sister City program operates under the Library Services Department. A delegation came from Incheon for the unveiling including a Korean dancer troupe.

That art piece, titled “Mutualism” and created by artist Oh Soon Mi, is of two heads in silhouette, one in pink, one in blue, engaged in discussion. It was installed at the front entrance of the Northwest Library.

After that, the City Council decided to reciprocate the gesture and approved to have the Library Services Department begin the process of commissioning an artwork for Incheon, Cohen said. A request for proposal was sent to artists the city has worked with in the past. In addition, a committee was created of members of the Sister City Committee and Art in Public Places Committee that reviewed the submissions.

The committee narrowed down the submissions to two, and the City Council met with the artists and selected the piece made by Jose “Rude” Calderon of Long Beach and Roberto Delgado of Highland Park.

Now installed in Incheon, the artwork features twin seven-foot carved travertine sculptures surrounded by a walkway that has ceramic tiles inset between the pavers. Calderon sculpted the stones. He chose New Mexico Travertine, because he wanted a piece of our land — a piece of our continent — transported to Incheon, he said. The twin stones were cut into an S shape and sculpted into forms that resemble wings, flames or leaves — depending on the eye of the beholder. 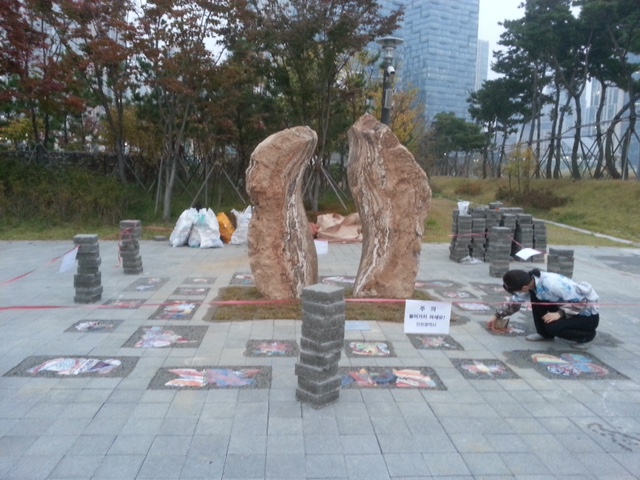 A worker installs tiles and pavers around the “Dancing Stones” sculpture in Incheon, South Korea. (Photo courtesy City of Burbank)

Calderon cut the stones from one boulder that was shaped like a wafer and angled the cut on the inside of the stones like yin and yang, [the symbol for Chinese philosophy], so they resemble wings or flames.

“They also look like continents coming together,” he said. “They also look like male and female figures in an abstract sense. The title is ‘Dancing Stones’ and the idea behind it was the collaboration between two cities, but in art, it goes deeper — two cultures collaborating, two continents in friendly terms coming together and in art, exchanging culture. I left it vague so there is not just one meaning but many.”

For the overall design, Calderon said, he wanted it to reverberate with a message of harmony therefore dancing in harmony and rhythm.

Calderon has exhibited his work internationally but this is his first international public art monumental piece.

“It makes me feel wonderful because art is universal. Art is for everyone. If I’m able to communicate a fraction of my inspiration for this piece to another culture, in a different language, on another continent, to me that’s just amazing to be able to do that,” he said. “I’m hoping it will do that for the people in Korea who see the sculpture.”

Artist Roberto Delgado created the tiles that are inset on the walkway. He used an airbrush and silkscreen technique to apply the collaged images of Lockheed, Warner Bros. and other pictures symbolizing Burbank on one side of the walkway and pictures depicting the sisterhood of the two cities on the other side. Delgado said he used photographs from Burbank historical books, the library and internet.

“It’s nice to have it in Samsung’s backyard,” Delgado said. “Incheon is a big port city and it is the corporate headquarters of a really big company — Samsung Electronics.”

The cost to commission the art piece and to ship it to Incheon was $50,000 and was paid for out of the Arts in Public Places Fund, Cohen said. The project and funding source were approved by the City Council in the spring of 2012.

The art sculpture is placed outside the newly built G-tower that features a park with a lake, Frutos said.

“It’s open space where the community can enjoy walking their dogs, bicycling and hiking,” Frutos said. “They paid Burbank the highest honor by placing the statue that we sent to them right outside their G-tower for all to see.”

During their stay, Frutos and Gordon toured Seoul one day and saw many historical sites and significant buildings, including Gyeongbokgung Palace. Another day, they toured Incheon and were introduced to city life.

Over the past 15 years, the port city of Incheon transformed thousands of acres of undeveloped tidal mud flats into an global business hub known as the Incheon Free Economic Zone, Gordon said. Numerous high-tech office buildings, hotels and residential skyscrapers have made Incheon into a highly desirable key economic gateway to Asia.

“At the same time, Incheon is in the midst of constructing a new port facility capable of handling the high-volume, super-sized containerized transport vessels that have become the gold standard of international trade and commerce, Gordon said. “Incheon is a very clean, modern city incorporating the latest technologies and environmentally compatible designs and practices.”

Frutos, being a police officer, noticed that Incheon is having serious traffic issues, in fact, while driving in traffic, it took two hours to go 30 miles. Frutos also asked a lot of questions about public safety and found out they use a lot of surveillance cameras.

“To the point that if a person is driving an unregistered vehicle, they immediately call the police to cite the person so the government can get their share of the registered taxes of the vehicle,” Frutos said.

Space is so limited that apartments are built 20 stories high. But in their culture, it is preferred.

“Especially single women, they don’t want to live in single family homes,” Frutos said. “They actually like living in apartments because of the [sense of] community and because of the safety. It keeps peddlers out of the complex.”

The rental system for apartments is also different in Incheon, Frutos added. When a person rents an apartment, he has to pay the owner of the property two years of rent up front. So people go to the bank to get a loan to pay the apartment owner. So for two years you have rent control. After two years, the property owner has the right to raise the rent, and you can stay or move.

The airport, he said, is a “total modern convenience airport.”

Gordon noted that the close ties created between cities through the Sister City program has broadened the opportunities for better understanding and appreciation of the cities’ differences and similarities.

“We have close and friendly relations with our first Sister City that afford highly beneficial educational and cultural exchanges whether through visiting students living with host families, the dedication works of art or simply sharing our respective histories and hopes for the future,” he said.

Cohen is very proud to see the art exchange come to fruition, she said.

“It expresses the deep friendship that’s existed between our two cities for almost 55 years,” she said.

The relationship with Incheon began soon after the Korean War. A young man from Incheon sent a letter to Burbank seeking books in English and that set into motion a series of book drives that took place on the San Fernando Boulevard (then known as the Golden Mall), Cohen said. Several book shipments were sent to Incheon and out of that came the Sister City relationship.

“In the last three years we have received books in Korean language from Incheon when the students have come to visit and when the mayor of Incheon came earlier this year, he brought several books written in Korean, which were donated to the library and are available to the public,” she said. “It’s kind of a nice circle, that we sent them books in English originally and now they are reciprocating with books in Korean to us.”