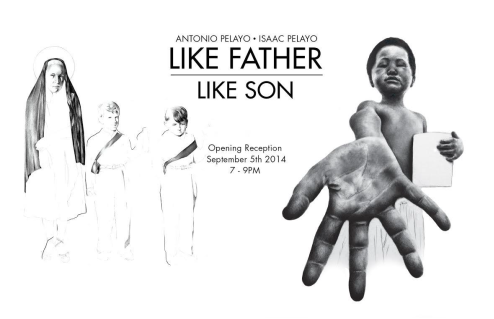 Explore the imaginations of two generations of hyperrealist artists, Antonio Pelayo and his son Isaac Pelayo, as they exhibit their works side by side for their upcoming exhibit “Like Father, Like Son”. Like Father Like Son opens September 5, 2014 at the Creative Art Center Gallery and is a celebrated collaboration between father and son who tell their intimate stories through mind blowing personal drawings. Belonging to the rare breed of hyperrealist artists who draw using only 2B lead on Bristol paper, the father – son duo have created with precision and detail, two separate series of their own entitled “Mi Familia II” by Antonio Pelayo and “Los Niños” by Isaac Pelayo.

Antonio Pelayo continues the journey of his family ancestry and explores that ever so deep question of “who are we” in his newest series Mi Familia II. By deliberately leaving void the individual’s bodies he draws, Antonio conveys through his hyper realistic series that nobody really knows who they are and that they are only faces in a crowd. Mi Familia II will invite the viewer into a detailed world full of close up miniscule moments and a tapestry of narrated experience, which dive into the roots of working class family, who has found peace despite their hardships.

Antonio Pelayo’s mastery of the pencil and paper moves inward to find and intimacy that we all crave. With his own hand, he drew himself into darkness and solitude and discovered his art. Now, ironically, that art goes public, and finds homes in not one or two worlds, but all. “That intimacy between the subject and the artist, the vulnerability that the subject must have to my interpretation – that is trust at its most divine.” His son, Isaac, is now following in his footsteps.