Discord is tremendous good fun. The brilliant dialogue should qualify as a special effect, triggering as it does a delightful display of intellectual fireworks. 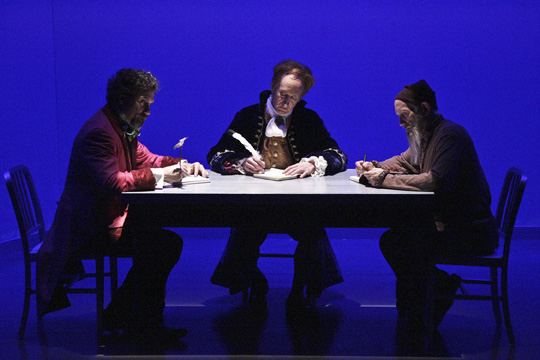 David Melville, Larry Cedar and Armin Shimerman star in the World Premiere of THE GOSPEL ACCORDING TO THOMAS JEFFERSON, CHARLES DICKENS AND COUNT LEO TOLSTOY: DISCORD,” written by Scott Carter and Directed by Matt August and now playing at the NoHo Arts Center in North Hollywood (Photo Courtesy of Michael Lamont)

In the very engaging program notes, Playwright SCOTT CARTER tells us that following a life-threatening event “he had an epiphany like Saul on the road to Damascus,” turning him from a “cynical comic” to a “non-affiliated deist.”  He went on a personal odyssey to hold on to his sudden insight and not let it fade. Discord emerged.

In the play, three men find themselves in a bare, white room with only a table, some chairs and a mirror mounted on the stage’s “fourth wall.”  All three had just died. All three entered through the room’s only door. And none of them can leave. It seems that God has put them into detention.

The three men are Thomas Jefferson (played by LARRY CEDAR), Charles Dickens (DAVID MELVILLE) and Count Leo Tolstoy (ARMIN SHIMERMAN).  Like in The Breakfast Club, we have the pleasure of seeing very strong and very different personalities spar with each other. Director MATT AUGUST and his great cast take this classic set up to a new level, seamlessly weaving together their characters’ differences in temperament and philosophy. 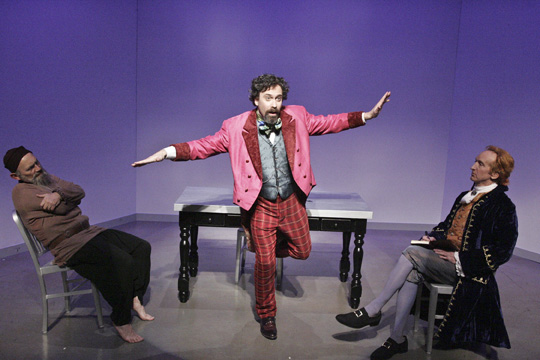 In classic Twilight Zone fashion, the three men have to figure out why, in spite of having died decades apart from each other, they are detained together.  Soon they come to realize that all three of them had written their own, decidedly conflicting versions of the Gospel.

And hence the play’s full title: The Gospel According to Thomas Jefferson, Charles Dickens and Count Leo Tolstoy: Discord. In their day, all three historic figures were no strangers to discord. Jefferson’s political enemies had made great hay from his unorthodox beliefs. Count Tolstoy had been excommunicated from the Russian Orthodox Church. And even the Anglican Dickens, the most traditional of the three, had taken the plight of Victorian England’s wretched working class a bit too seriously in the eyes of many of his co-religionists. 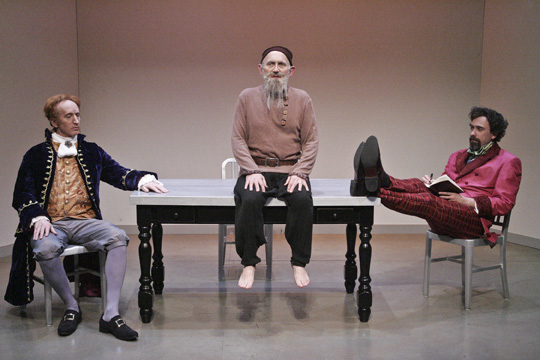 Each man in his own way was a heretic. The word “heresy” comes from the Greek word for “choice.” To the orthodox, the heretic chooses to exclude certain inconvenient truths that the faithful refuse to ignore. To the heretic, the orthodox have allowed institutional corruption to grow like tares alongside the truth, and so choosing becomes necessary.

And indeed Discord at first focuses on Jefferson, Dickens and Count Tolstoy trying to convince each other that their version of the Gospel is the best distillation of its truths. But then Discord takes an inspired turn that presents the audience with an ending as ingeniously constructed as the one in Sixth Sense. Here are some hints drawn from Gospel verses that all three men would’ve subscribed to:

From a balcony seat in the afterlife, Rod Serling’s applauding Discord along with the earthbound NoHo audience as he says to himself, “Wish I’d have thought of that.”

Discord runs through Sunday, February 23 at the NoHo Arts Center, 11136 Magnolia Blvd. (near Lankershim) in North Hollywood.  Performances are Thursdays, Fridays and Saturdays at 8 pm; Sundays at 3 pm. Ticket prices are $35 for all performances; seniors and students, $25. For tickets or group rates, please call (818) 508-7101 Ext. #6 or visit www.nohoace.com.