The “Big Game” between cross-town rivals Burbank and John Burroughs High Schools on Friday night , is the biggest thing in town — even if it isn’t going to happen in town.  The game is being played at Arcadia High School, due to the construction at Memorial Field. 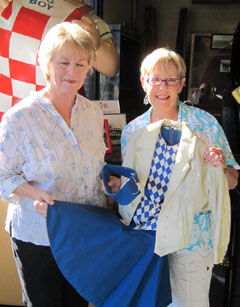 For one Burbank High Alumnae, the game brings back memories of a similar game 50 years ago.  In 1961, Ellen Humphrey was a senior at Burbank High, and a member of the school’s Drill Team.

Ellen and her husband, Neil Russell live in British Columbia, Canada, but have visit her parents here often.  On a recent visit to Burbank, she was going through things that had been stored away in a closet at her parents’ home on Reese Pl.   She came across her old Burbank High Drill Team uniform.

“Mrs. Dettmann was our instructor, and I was in rank 5,” said Russell, “We practiced every morning, coming to school at 7:30 a.m.”

Being on the drill team required a lot of hard work and dedication, plus an attention to detail.  “We wore little hats that were held on our heads with bobby pins,” noted Russell, adding, “You couldn’t have a bobby pin showing.  If it did, you had to fix it immediately.”

She remembers the Burbank vs. Burroughs Game in 1961 as an exhilarating experience for the drill team members.  Burbank High was the home team that year.  The score was tied 7-7 into the 3rd quarter.  By the end of the game, Burbank High had won by a score of 25-13.

“We were so proud of our team, they beat Burroughs,” said Russell, “It was an adrenalin rush being on the field under the lights.”

Although her old uniform brought back all those happy memories, Russell decided to donate it to the Burbank Historical Society, so that eventually it can be on display in the Gordon R. Howard Museum.

Although she and her husband don’t plan on attending the game in Arcadia, they may just stop over at Bob’s Big Boy in Toluca Lake.  It’s where she used to go, along with everyone else on the dill team, after football games.