Burroughs High has had its share of students over the years that have missed large amounts of school time for legitimate reasons.

Many of those, like Ron Howard, have done so because of their careers in television.

But Burroughs High junior Dylan Young figures to miss a good amount of time this year for a completely different reason. The 17-year-old all-around gymnast recently was named to the United States L-10 Junior National Team after a strong showing in the P&G National Championships in Anaheim.

“When I first started gymnastics as a little kid, I would have never expected to be at the position I am,” said Young.

He will now miss some time from school to participate in four training camps at the U.S.  National Team training facility in Colorado Springs, Colo. The first one is later this month.

“I haven’t told my teachers yet, but I’ve told some of my friends and they think it is very cool that I am able to do all these things,” said Young, who said he doesn’t like to eat fast food and has either fruit and or vegetables with every meal.

Young’s coach Arthur Minasyan said he has been thrilled to work with him for so many years.

“I have been working with Dylan since the age of six. This journey has been filled with ups and downs, sweat and tears,” Young’s coach Arthur Minasyan said.

“Dylan made the L-9 USA National Team back in 2015. At the Olympic Training Center he injured his knee. After recovering from the knee injury, he needed elbow surgery, through all these setbacks, Dylan never lost hope of one day returning to the main stage with an opportunity to get back on the National Team,” Minasyan added. “He never lost focus of his goals, and this year being injury free for the first time in over two years he had the opportunity to compete on USA’s biggest stage at the P&G National Championships in Anaheim’s Honda Center, where his hard work and dedication finally paid off.”

Young said he bounced back from the anterior cruciate ligament injury through conditioning and working with a strength coach.

This summer his rise even landed him an opportunity in July to attend a camp in Hungary.

“I guess the furthest is Florida,” Young said of his longest competition away from home to date.

That will soon change and Young is eager to new challenges and experiences.

Young, who said his favorite event is the parallel bars, is now able to field calls from major universities around the nation.

“I haven’t even begun putting together my list of colleges yet,” said Young. 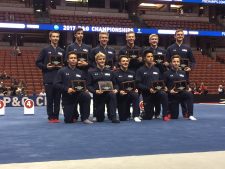 Combining athletic talent with a 3.7 grade point average, Young said that although he has no favorites, he certainly wouldn’t mind getting a call from Stanford University.

“A lot of them are looking at me, which is good,” Young said of colleges.

There may be times when there is an empty chair in Dylan Young’s classes at Burroughs, but chances are he too will be celebrating some ‘Happy Days’ ahead.

Burbank Football Gets In Shoot Out With Pasadena