There is something about Burbank On Parade that makes it one of the highlights of the year in our city, and this year’s parade was no exception. 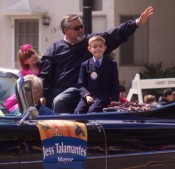 Hometown parades are something special.  They are never going to compare to the Rose Parade with its beautiful flower bedecked floats, , but they are special in their own way.  Where else would you find your neighbors and friends riding or marching by, or the mayor waving back at you because he actually knows you?

It has become a tradition in our family to go to Burbank On Parade.  I fondly remember going to the parade with my parents, aunts, and cousins back in the late 1940’s and early 1950’s.  Since the parade was revived in 1982 by a group of realtors headed by Sandy Dennis, I don’t think I’ve missed more than one or two parades.  I even recall sitting through a parade years ago with my young son when it was raining.  We had on raincoats and boots, and held umbrellas.   It was cold and wet, but it was still fun.

This year’s parade at least had beautiful weather.  I can remember years when it was downright hot.  We used to put up our big red beach umbrella, but it was always a hassle to set up.  This year we found a nice tree to give us a little shade if we needed it.  At the 2006 parade we fought over who would get to hold my baby granddaughter.  It was cold that year, and tucking Madison inside one’s coat was like having a little heater.

Keeping up the family tradition, we took Madison’s baby sister, Savannah, to her first Burbank On Parade this year.  At just shy of 4 months old, I’m not sure how much she liked it.  The siren on the Airport’s big yellow crash truck did get her attention, however.   She’s still a little too young to wave at the folks in the parade, but plenty of them waved at her.

We, and those around us, were all quite impressed with the helicopter flyover.  Everyone along the parade route who received the special BurbankNBeyond Souvenir Parade Program got advanced warning to look up in the sky and not down the street when the parade started at 11 a.m.   Several folks around us were commenting on it, especially about how they never knew that the police and fire helicopters came equipped with sirens.   Sgt. Robert Quesada of the Burbank Police Department’s air unit did a great job in coordinating the flyover.

It wouldn’t be a parade without bands.  The John Burroughs and Burbank High marching bands always impress the crowds with both their music and colorful uniforms.  The middle school bands were great, too.  Jordan’s band “marched” the entire parade route while seated on a large semi truck trailer.  My favorite is the Burbank Burroughs Alumni Band.  Although small in number, they show up every years for the parade.

I remember standing on Olive Ave. next to Robert’s Drive-In at Victory Blvd. watching the parade at night. It must have been 1955 or 56.   My friend and neighbor, Ronnie Lee, drove by in a miniature Ford Thunderbird that was advertising the local Ford dealer, Valley Ford.  The battery-powered car was running out of juice, and Ron’s father (who was just ahead of him riding on the back of a truck) was hollering at him to turn off the car’s lights.  Fortunately the parade ended just a couple of blocks away at Olive Park.

Back in 1985, my step-daughter’s Brownie Troop had its own float in the parade.  I built it on a flatbed trailer, with a row boat borrowed from Hume’s Sporting Goods.  It featured a large whale we made out of paper mache, that the Brownie’s had hooked while fishing.  The whale was pulling the boat through the make believe water. Inside were a couple of older girls recruited to blow bubbles out the blow hole in the top of the whale.  They won a trophy, but we all got some great memories from it, as I’m sure all the Girl Scouts and Brownies did who were riding by on the big lumber tucks from Stock Building  Supply this  year.

Seeing some of her friends go by was exciting to my granddaughter Madison.  She especially enjoyed it when some of her fellow classmates from Geneva Tarandek’s kindergarten class at Edison Elementary came by, like George Wyatt and his mom, Faith,  Kelly Hagan and her dad, CJ. and Collin Kusumi and his little brother Lincoln.  She was really impressed to see her school’s principal, Laura Flosi,  in the parade.  When her friend Bella Bullock and her mom Mary, who were riding with the Girl Scouts, came by Madison decided that she wants to be in the parade next year.

The Bob Hope Airport did a fantastic job in sponsoring the parade this year.  We are so fortunate to have the airport as part of our community.   Saluting aviation was a great idea.  I just wish they had flown one of Lockheed’s SR-71’s down the parade route.  Of course at mach 3, maybe they did, and it was just so quick we didn’t see it.