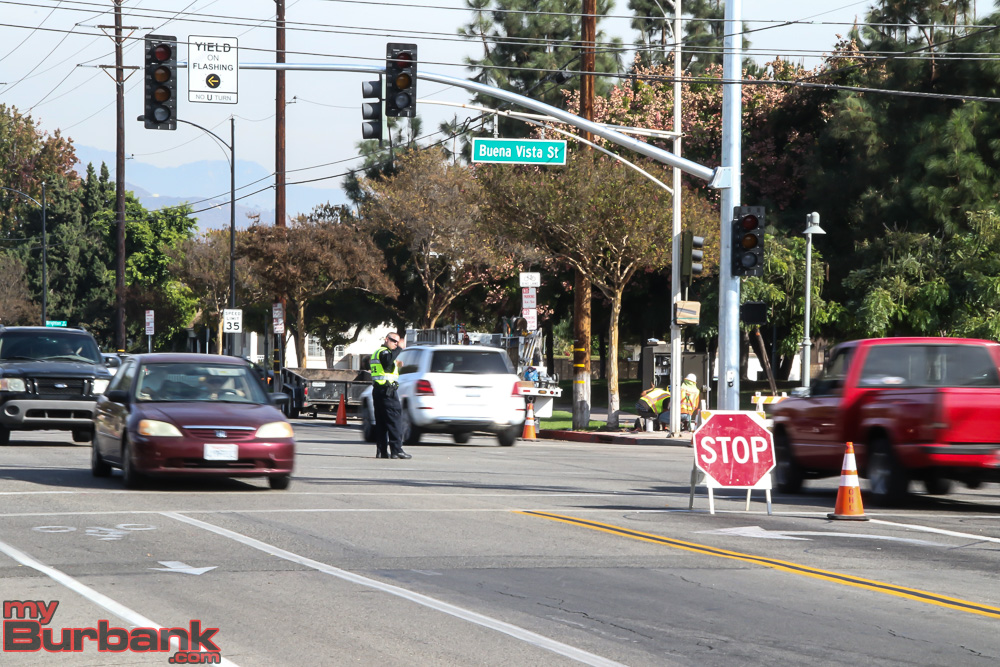 While 2021 signifies the start of a new chapter in Los Angeles County as COVID-19 continues to evolve, this year also marks the close of The City of Burbank’s 2011-2021 ten-year strategic plan, entitled “Our Plan Our Future Our Burbank.”

Adopted by the City in November of 2011, the proposal includes a list of ten goals for Burbank’s 2011-2021 timeline, with goal number 8 addressing an essential function of the City: transportation.

The strategic plan’s focus has largely been placed on active transportation, meaning a transportation system which promotes automobile efficiency while implementing features that allow for increased traveling alternatives. The third highlight of the plan’s transportation goals specifically addresses bicycle and pedestrian needs in order to reduce congestion and increase street safety for all users.

“Back then and even now, our focus [with the plan] was coming away from looking only at automobiles and moving to a more inclusive transportation system that has more choices for people,” David Kriske, Assistant Community Development Director of Burbank’s Transportation Division, said.

A top-priority project the City created in order to include more extensive biking options is the Bike Master Plan. Adopted in 2009, two years prior to the ten-year strategy’s establishment, the plan has resulted in the City pursuing numerous grants for bike-related projects. This includes the Burbank Channel Bike Project, which just re-opened in February of 2021. Although initial grant fund requests were placed to Metro in 2011, and phase 1 of the project was completed that same year, the pace of grant funding has inhibited further progression until now.

“That’s the pace of transportation projects,… with getting the money, then doing the project and implementing it and going to the public and doing the outreach,” Kriske said. “It takes a long time…it’s been about 10 years since we put pen to paper to get that grant to when the project opened.”

Another noteworthy proposal formulated from the City’s ten-year goals has been Burbank’s Citywide Complete Streets Plan, a comprehensive guide for improving transportation across the board, placing emphasis on total traveler safety for the Burbank community. The plan is detailed in an outline which includes such goals as reducing neighborhood traffic, forging connections in local infrastructures, and encouraging walking or biking transportation in the City.

In addition, funds for a Chandler Bikeway extension were granted to the City in 2013, although not made available until recent years. The City is currently working on design plans for the extension, which will connect the Chandler Bikeway to the Metrolink station via Mariposa St. and Victory Blvd. Furthermore, the department has used repavement undertakings as opportunities for bike lane inclusion on an ongoing basis, including at 3rd St, Alameda Ave., and Victory Blvd.

“Complete Streets is really building out that vision with exactly what we do on the ground to modify our streets,” Kriske said. “We have a lot of new design guidance in that document, from the way that we’ve changed the engineering and planning profession to improve the way we accommodate bikes and pedestrians…So that’s been exciting.”

Burbank City Council Member Sharon Springer became a more active participant in the City’s transit systems in 2017, when she got rid of her vehicle and started to travel only using public transportation. Springer has maintained this travel model for the past three and a half years, which has given her deep insight into what the community’s transportation needs are.

Springer says that first and last-mile travel safety, along with environmental safety measures, are two primary areas to focus on in Burbank’s Transportation Division. She supports such innovations as the aforementioned Complete Streets Plan and Metro’s new Micro Metro program, which offers on-demand small vehicle trips within LA County. Along with these plans, Springer approves of a proposed trolley for Burbank’s Magnolia Park, also a transportation goal of Burbank Mayor Bob Frutos.

“[A trolley] is a good idea for Magnolia [Park]. The environment is so charming and a big bus wouldn’t fit in well with the area,” Springer said. “It would be a great way to get people on public transportation.”

Walking or biking navigation developments have expanded to projects at Burbank educational locations, namely George Washington and Thomas Jefferson Elementary Schools, and John Muir Middle School. The City created a provision of more accessible biker and pedestrian accommodations at these schools in 2020, along with regulations to increase student and staff safety. New stop signs have been brought to these spots and vehicular speed limits are now 15- miles-per-hour during school hours.

“We have a plan to move [these adjustments] to all [Burbank] schools,” Kriske said. “We…implemented some safe school citywide policies that have been really successful in answering people’s concerns for speeding in the neighborhoods. We have now a more direct way to implement stop signs around schools and in places where speeding or pedestrian conflicts are a problem.”

The Burbank Transportation Division has also set out to improve parking facilities, as mentioned in the third goalset of the ten-year plan. A year and half ago, the City Council approved a set of parking management principles which will make parking more accessible while limiting neighborhood disruption from outsider visits. Although this area of the ten-year plan hasn’t received an excessive amount of attention during recent years, Kriske says that the City will soon be amping up efforts for city parking accommodations.

“That’s another big issue that touches every American’s life in terms of how they park either in their neighborhood or when they’re going someplace,” Kriske said of Burbank’s parking situation. “We want to protect neighborhoods while making the parking available to people that are visiting. And so we’re starting to roll that out by managing parking first at the Metro station and then also in Downtown Burbank.”

Metrolink support has been a major point of concentration for the City’s goal of increasing transit services throughout the past decade, most recently with a large grant to increase their services with 15-minute travel in and out of Burbank.

Furthermore, updates to the Burbank Bus’s Pink Route is a key project for the department. This program was finished at the end of 2019 and added a connection to the Red Line at the Universal City Station, allowing access from this location to Burbank’s Media District. The Pink Route schedule has also increased in frequency to run every 15 minutes during peak travel hours. These features led to a 7,000-person increase utilizing this route each month from late 2019 to early 2020. Ridership loyalty that has been upheld with a regular schedule, in spite of overall operational hour reductions, during COVID-19.

“With those changes, we’re making sure that we are running frequently all day…that the bus is going to come by frequently enough, that you can depend upon it,” Kriske said of Pink Route alterations. “And then we straightened the route and are now serving …the Metro system in Downtown Burbank [and]…the Universal City Red Line station…which got a lot of additional ridership and made it much more useful.”

In relation to the ten-year plan’s objective of public outreach, Burbank introduced real-time transit information in 2020, which can be found on transit apps, including Google Transit. The info lets users know exactly when their bus is scheduled to arrive and boosts traveling reliability. Marketing efforts for this program were planned for the fall of 2020, but halted when COVID conditions worsened. The Transportation Division is remaining involved in their awareness of pandemic conditions and hopes to be able to provide more traveler marketing by the summer of this year.

City personnel carefully anticipate that public transportation will regain its capabilities and functioning once COVID-19 has reached a certain level of improvement.

“Once we’ve recovered [from COVID], I believe we’ll heal and go back to public transportation,” Springer said. “We must move forward in a positive way, and one thing we can do [looking ahead] is catching things early and address pandemics and catastrophes from the beginning.”

Environmentally sound modes of transportation were additionally included in goals for the 2011-2021 decade. Recent insights from the state of California will shape future transportation regulations in the City to best serve the environment and limit greenhouse gas emissions. These new understandings pinpoint differing causes of environmental disturbances in vehicular usage, particularly that the amount of driving users contribute can be the most damaging to our atmosphere.

“Traditionally, we have always [focused on] congestion and delay because that’s what people are worried about,” Kriske said. “But what the state has now told us and what we’re now implementing is, it’s not so much the congestion that [has a negative] environmental impact. It’s the amount of driving that you do that emits greenhouse gases that make climate change worse.”

The City’s environmental interest is an area where the Transportation Division will increase focus efforts in the future, namely by strategic housing placement. The department is presently updating plans for Downtown Burbank and Golden State Airport area housing projects. The housing they bring into these sectors will allow for close proximity to both existing neighborhoods and Burbank transit systems

“Adding housing and where it should go is really important,” Kriske said. “The more housing we can put in Burbank in the right place that’s close to transit and as close to jobs is going to really improve…the transportation network’s effect on the environment.”

In addition to City efforts, Springer’s break from personal vehicular traveling serves as a model for how residents can make a difference in improving Burbank’s amount of greenhouse gas emission and overall environmental conditions.

“We each need to play a part in reducing our carbon footprint,” Springer said. “[When I was last] using a car in the middle of traffic,..I realized I was part of the problem. I hope to encourage each of us to use public transportation to reduce GHG emission and traffic.”

A Burbank local who has been with the City’s Transportation Division for 18 years, Kriske is optimistic about how the administration will further transit availability in the coming years.

“[Burbank is] small [and] accessible. We have small city amenities, but we’re still close to everything Los Angeles has to offer,” Kriske said. “And I think our policies are only making those opportunities more available in other parts of the city. And that’s what’s exciting about still living here and seeing things evolve.”