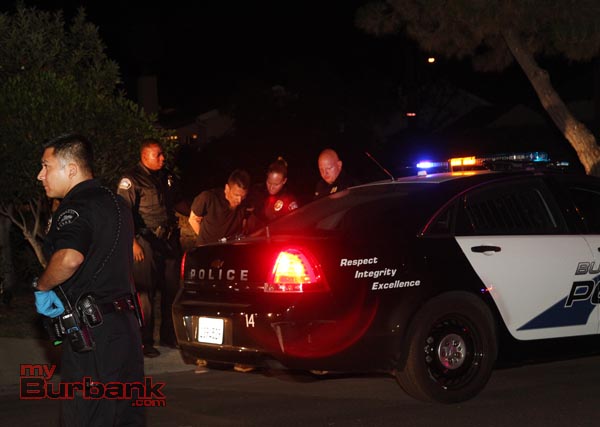 Burbank Police received a call of a residential burglary in progress in the 600 Block of Priscilla Lane late Friday evening and they dispatched several units, two of them Code 3 with lights and siren.

The responding units were dispatched at 9:29 p.m. and the first unit arrived on scene within two minutes at 9:31 p.m. and got a description of the suspect who had kicked in a door and made entry to a house, with the occupant inside. The additional responding units which included a K-9 Officer and helicopter started to setup a permiter in the neighborhood so the fleeing suspect could not get out of the area.

The suspect couldn’t get far with the area surrounded, and within a couple of minutes the K-9 Officer spotted the suspect hiding in a empty field nine houses from where he broke in.

UPDATED Tuesday Sept 2nd @ 9:45 PM  According to Burbank Police the alleged suspect Gary Nutt 35 of Burbank was taken into custody and positively identified by the homeowner who had chased him from his home.

Nutt who was booked into Burbank Police Jail for residential burglary, and providing police with False I.D.

This story previously reported that Brandon Ritter 35 was arrested, and charged, police corrected this to the above named suspect after they determined false identification was provided.